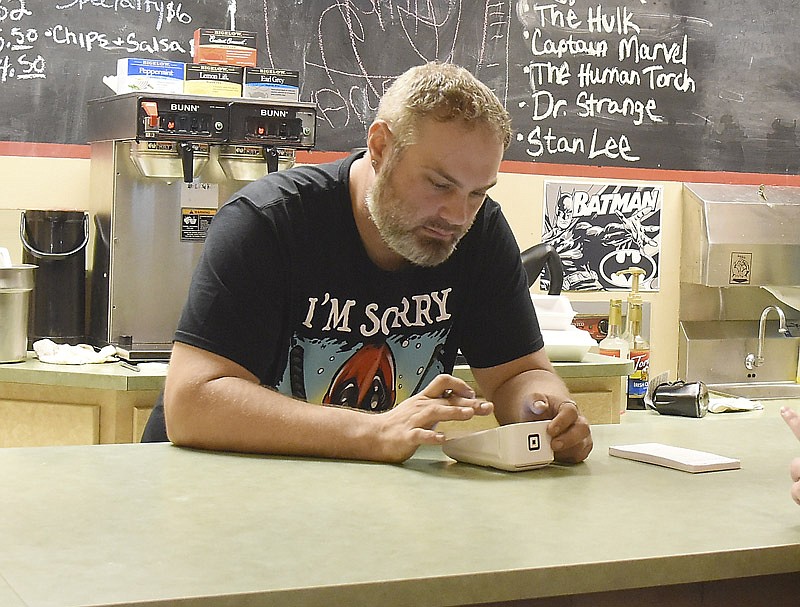 In this September 2019 file photo, Anthony Stephens waits on a customer at Gotham Grill at its former location inside the Governor Office Building in Jefferson City. (News Tribune file photo)

The comic-book-themed cafe opened in the Governor's Office Building in September 2019 and closed in February 2020 so it could reopen at a more visible location that isn't limited to the state office building's hours.

The new location is at 205 E. High St., in the heart of downtown Jefferson City.

Owner Anthony Stephens had originally hoped to reopen Gotham Grill in April 2020, but it was delayed due to the COVID-19 pandemic, building inspections and trouble finding employees.

Stephens said he has been looking for employees for about three months and has hired only one. However, that's not stopping him.

"I will be cooking, and there will be one person at the front," he said. "Hopefully it works out because I'm tired of waiting. I've been looking for staff for like three months now, so I'll just go with what I've got and go from there."

Stephens said the only thing stopping him from opening now is an internet issue, but he hopes to resolve it shortly or accept cash only until it's resolved.

After it opens and word of mouth gets out, he hopes to soon hire more people.

"I have a feeling that I will be busy, so I would like to have maybe two people in the kitchen and one up front," he said. "And if it stays popular and busy, I'll eventually have maybe four employees at one time just to keep up with everything."

Gotham Grill -- named after the fictional city where Batman lives -- is decorated with comic book posters and figurines, and the menu items are named after superheroes and supervillians. The inspiration for the restaurant came from Stephens' 8-year-old daughter, Harley Quinn, who picked out the theme and menu items.

Previously offering salads and sandwiches, Stephens has changed the menu to focus on Mexican options.

"The salads were very popular, so I brought them back, but most of the sandwich kind of stuff I converted into quesadillas or tacos and then added upon it and expanded out the menu even more," he said. "Once we're comfortable with the flow of things, I'll start bringing in specials, too."

From 8:30-10:30 a.m., Gotham Grill will serve breakfast burritos, tacos and rice bowls along with biscuits and gravy. From 10:30 a.m.-2 p.m., it will serve a variety of fajitas, tacos, salads and quesadillas.

"My whole goal is to make sure people eat high quality food for a good price," Stephens said. "I just want people to have a good time, good food, and not break the bank. That's pretty much my whole motto. I want to take care of my customers because, in the end, they're the ones that take care of me."

Gotham Grill's hours will be 8 a.m.-2 p.m. Monday-Friday, and Stephens said he is considering expanding the hours to include 9 p.m.-12 a.m. Thursdays-Saturdays.

To inquire about a job at Gotham Grill, message Stephens on the Gotham Grill Facebook page.