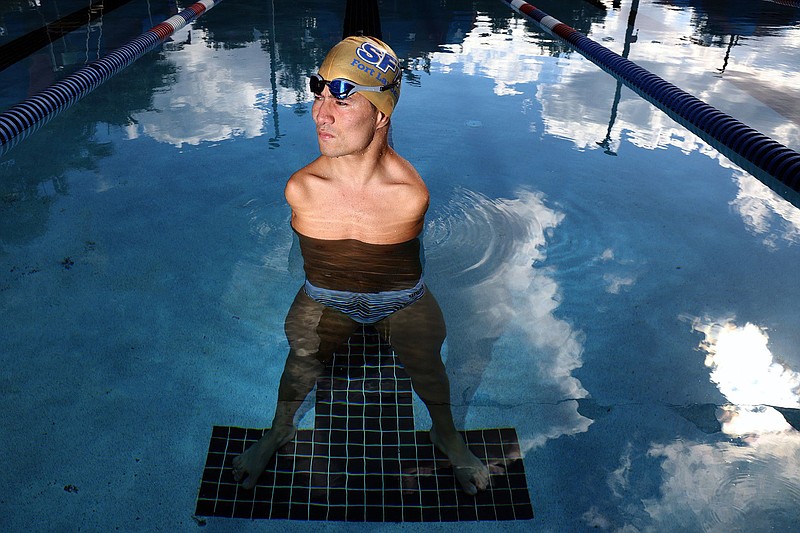 FORT LAUDERDALE, Fla. -- Afghan refugee Abbas Karimi may have been born without arms, but he's setting the swimming world on fire with his heart.

Karimi, 24, fled his war-torn homeland at the young age of 16, leaving behind his family in Kabul to forge a new life.

"I wanted to show the world what I am made of, what I am capable of," he told the South Florida Sun Sentinel.

Karimi has devised ways to swim the backstroke, breaststroke, freestyle and butterfly -- but butterfly is his favorite.

"That's the hardest," he said. "That's why I chose it. It's very hard. I like to do hard things. If it's easy, I leave it for someone else."

Within the sport, Karimi is known for his discipline, his focus and his kindness, his coach Marty Hendrick said.

'He has this aura'

"He's just good people," said Hendrick, the Masters head coach for the Swim Fort Lauderdale program. "To my father, that was the highest form of compliment. And that's what I would say about him. People just smile around him. And it's not sympathy. He has this aura. People are drawn to him."

That includes Debbie Rosenbaum, a paralegal and Masters swimmer who has taken Karimi under her wing, treating him like a son.

"She told me she was going to adopt me as her son," Karimi said. "And I said, 'OK, mom.' She has really been like a mom. She is always there for me. I am very blessed to be surrounded by lovely people who have my back. I love her very much. And she loves me."

Rosenbaum, who has a son and daughter of her own, calls Karimi her other son.

"He's the love of my life," she said. "He truly is an inspiration to all. He is wise beyond his years."

Karimi, who turned 25 on Jan. 1, lost his father two years ago. It was heartbreaking, but Karimi said his Muslim faith and dream of a better life helped him carry on.

Those who know him say he likes to look ahead to the next challenge, the next goal, the next swim.

At peace in the water

It was in the water where Karimi found solace from childhood bullies who mocked him for being born without arms.

"My father said, 'God took your arms. But he put all the talent in your feet and your mind and heart. And you are going to find your way.' Now I realize what he meant with those words. What I became was a gift from God, so I could make something of myself and motivate others also."

He took his first jump into a river at age 6 or 7, he said. Then at 13, he started swimming in a community pool his brother helped build, using a lifejacket to help stay afloat. A lifeguard took note of his natural talent and taught him the breaststroke. From there, he fell in love with the sport.

These days, Karimi has the mindset of an elite athlete, his coach said.

He sticks to a strict schedule that has him up before dawn and in bed by 8:30 p.m.

He trains four days a week at the gym and six days a week at the pool, sometimes twice a day. That means waking up at 2:30 a.m. to down some oatmeal, then it's back to bed until 5 a.m. Then it's off to swim practice starting at 6:45 a.m.

Karimi has won eight international medals so far, including silver in the 2017 World Para Swimming Championships held in Mexico City.

He competed in the 2020 Paralympic Games held in Tokyo in 2021. A member of the International Paralympic Committee's Refugee Paralympic Team, he competed in the 50 Meter butterfly S5 event, where he qualified for the final and finished eighth overall -- not as well as he expected.

Just as he was preparing to compete in the Paralympics in Tokyo, Kabul fell to the Taliban.

"That's when his family became refugees. Kabul fell and his entire family had to flee," Hendrick said. "Mother, siblings, nieces and nephews. They were trying to escape while we were in Tokyo. That crushed him. That's the only time I ever saw him sweat. There was nothing he could do."

An escape from Afghanistan

Karimi fled Afghanistan by flying to Iran in 2013, where he spent a week before embarking on a dangerous trek into Turkey, joining a group smuggled across the border.

"It took three days and three nights," Karimi said. "Some parts were walking and some driving. That was scary. I was 16. But I wanted a new life. I took a very high risk. I could have been killed or could have died. But thank God I crossed that path and got into Turkey. It was dangerous but that was the price I was willing to take. Make it or don't make it."

Karimi spent four years at Turkish refugee camps. Then with the help of the United Nations and former wrestling coach Mike Ives, he moved to Portland in 2016.

"I came here through the United Nations' refugee program," Karimi said. "I was one of the lucky ones. My American father, Mike Ives, contacted me and wanted to help me get to the USA. He emailed the United Nations for two years."

A move to Fort Lauderdale

When the pandemic hit in March 2020, Karimi had trouble finding a place to train. So in August, during the midst of pandemic lockdowns, he made the move to Fort Lauderdale to train with Hendrick.

Karimi found a coach in Hendrick but also a father figure who made room for him in his own home. But at the pool, Hendrick wears only the coaching hat.

"I define Abbas as an elite swimmer," Hendrick said. "And elite swimmers have a mentality and a drive that is far different than your standard athlete. But for him, I think it had a lot to do with his disability and people having an expectation of what he can't do. He was driven to become independent, which I believe was his main motivation in leaving Afghanistan. There was no future."

Karimi's family now lives in Pakistan. He has five brothers and four sisters. His youngest brother is living in Turkey as a refugee.

"I'm active on Instagram and Facebook and I talk to my family every day through Messenger or WhatsApp," he said. "I miss them so much. It's almost 10 years I've been away from them. I am doing my best to make them proud."

Karimi said he hopes to bring his mother to the U.S. one day. He also hopes to get his citizenship by June so he can swim for the U.S. team.

A book is in the works, too.

"The United Nations has put him in touch with agents," Hendrick said.

For a world in need of inspirational tales that give hope, Karimi's life journey seems a natural fit.

That's one reason Karimi became a youth ambassador for the United Nations, helping show the world's 82.5 million refugees how they too can acclimate to a strange new home.

Karimi is now on track to become a goodwill ambassador for the United Nations in April or May, his coach said.

"The U.N. looks at him as an athlete who acclimated through sport," Hendrick said. "The U.N. does not see him as an armless refugee. In having trained with him, you never see a disability. You see an athlete who wants to get faster and faster."

But there is always heart behind what he does, said Karimi's coach.

And in 2024, there is the Paralympics in Paris.

"I plan to compete," Karimi said. "But there's lots of competitions between then and now. I have to keep competing to get better and better. That's how it works in sports."