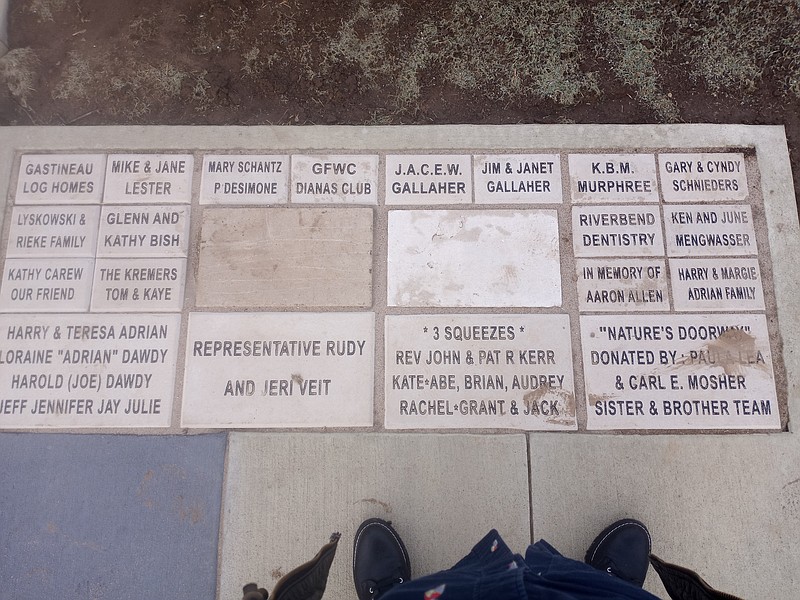 Two weeks after two commemorative pavers were removed from a plaza on Adrian's Island due to the message inscribed on them, no efforts have been made to review and potentially remove other pavers that contain messages beyond the donor's name.

The Bicentennial Bridge Committee has been charged with reviewing new paver purchases, but specific guidelines for what is allowed on the pavers have not been drafted.

As a fundraising vehicle for the Bicentennial Bridge, people could purchase brick pavers that go along the path on Adrian's Island.

The 765-foot bridge, which stretches over the Union Pacific Railroad track, connects the Capitol grounds with the 30-acre strip of land on the other side of the railroad tracks referred to as Adrian's Island.

The bridge opened Dec. 20 and allows access onto the island. Crews are still working on elements of the park, but a concrete walking path is open with pavers along part of it.

Two days before Christmas, Mayor Carrie Tergin had two pavers removed from where crews placed them earlier that week for the bridge's opening.

She said the two pavers were removed because the language on them too closely resembled the plaque on a Civil War monument the City Council removed in 2020. She said the pavers didn't align with the original intention of the pavers to recognize donors to the project.

The United Daughters of the Confederacy, which purchased the marker, has ties to the Ku Klux Klan, which ultimately played a large role in the City Council's decision to remove the original marker.

With this first order of pavers, Tergin said, nobody reviewed them. If somebody purchased one, it was ordered.

From now on, any pavers purchased are pending approval by the Bicentennial Bridge Committee, she said. Tergin said the purchase flyer online would be updated to reflect a focus on honoring donors to the project, which hasn't been done yet.

However, she said, nobody is currently going through the others already purchased to ensure they don't present any concerns.

She also said there's nobody working to create guidelines or regulations for what is or isn't appropriate for the pavers, although that may be down the line.

With the holidays, Tergin said, she hasn't been able to reach out to anybody else who purchased pavers that may be in question.

For instance, one paver at the plaza is engraved with the Bible verse John 3:16.

Of the 51 pavers on the island -- excluding the two blank ones and John 3:16 -- another six pavers have messages in addition to an individual or organization's name (not counting those with statements about being in memory of somebody). These include references to other Bible verses and the "Mighty Mo."

"I haven't received any calls asking for that removal either," she said Tuesday of the John 3:16 paver. Tergin said she received "several inquiries" about Vogel's pavers.

Tergin said the Bicentennial Bridge Committee has not met or discussed how to handle the pavers moving forward.

"The urgency in removing these particular pavers was that they reference the rock which council had previously voted to remove," she said. "So, keeping in line with that decision that was made by council, I felt it appropriate to remove those."

The removal of the pavers drew the interest and focus of City Council members Monday when Ward 3 Councilman Scott Spencer introduced a resolution to recognize the historic significance of Oct. 7, 1864.

Spencer's resolution, as he presented it, reads: "We as the City Council representing the citizens of the City of Jefferson recognize the significance of the historical date of Oct. 7, 1864, as a day that lives were spared due to General Sterling Price's decision not to attack the City of Jefferson in the American Civil War. This resolution in no way shall be construed as being sympathetic to the cause of the Confederacy. This date shall serve as a day of remembrance and reflection.

"The City of Jefferson must continue to look forward, but there are times when we must look back to see where we have been and how far we have come as a community. This is a part of our local history that is forever linked to our country's and should be remembered and revered for what it is; a celebration of life and a community spared from the ravages of war."

The resolution was not on the City Council's agenda for the meeting, which meant it couldn't be voted on because state statute requires at least 24-hour notice, City Attorney Ryan Moehlman said.

However, the council decided in a 5-5 vote against placing it on the Jan. 18 agenda for formal consideration.

Spencer said his goal is to recognize the historic event.

Tergin said Dec. 23 she decided to remove the pavers on Adrian's Island because the messaging didn't align with the original intention of the pavers to be for names, and the council had already made a decision about having the language on city-owned property.

Ward 5 Councilman Jon Hensley said the resolution seemed to stop just short of establishing the date as a local holiday.

Since the meeting, Spencer said he's been encouraged by other council members to bring the resolution up again.

Julie Smith/News Tribune Before the ribbon was cut and the Bicentennial Bridge was officially opened, crews from Parks and Rec and Verslues Construction were taking care of last minute details and preparations by picking up sticks and any trash and by the placement of pavers purchased by supporters of the bridge and park. Andrew Bax of Jefferson CIty Parks and Rec carefully leveled the fine sand before setting the engraved pavers, which were sold as a funding mechanism to support the bridge and park project.
ADVERTISEMENT