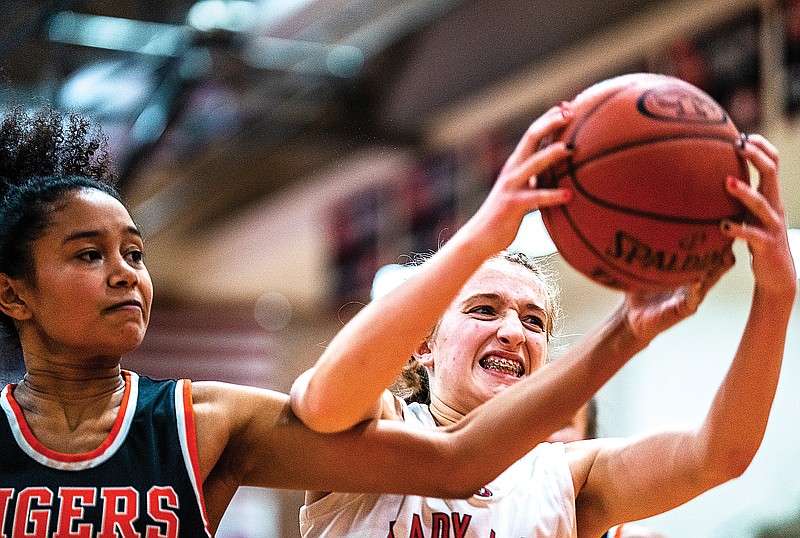 The weather outside was chilly Friday night. So was the shooting in the first quarter.

But the Jefferson City Lady Jays turned up the heat in the second quarter on their way to a 50-33 victory against the Waynesville Lady Tigers at Fleming Fieldhouse.

“We have different offensive looks and we went to an offense we are very comfortable in, one that we ran all summer,” Jefferson City coach Kay Foster said. “We got comfortable.”

The teams combined to go 5-of-30 from the field in the first quarter, which ended with Jefferson City holding a 7-4 lead. During the break between quarters, the Lady Jays changed what they were running on offense.

“We’re young, we’ve had to simplify a lot of things and there’s a limit right now as to how much we can run without getting rattled,” Foster said.

It worked. After Breona Hurd tied the game with a 3-pointer for Waynesville, Jefferson City rattled off seven unanswered points in less than a minute to take the lead for good at 14-7.

Hannah Linthacum capped the run with a layup ahead of the Waynesville defense. It was one of two breakaway baskets in the quarter for Jefferson City, which pushed the ball up the court as much as possible.

“We had to control the tempo of the game,” Foster said.

Jefferson City then closed the quarter on an 8-0 run to take a 23-9 advantage into halftime.

The Lady Jays scored nine of the first 12 points in the third quarter to take their biggest lead of the game at 32-12. Hurd then scored the final eight Waynesville points of the quarter to help pull the Lady Tigers to within 14 at 36-22 heading to the fourth quarter.

Waynesville (2-8) got no closer than 12 points in the fourth quarter.

Jefferson City did a good job taking care of the basketball, committing just 11 turnovers. While Foster was pleased with that total, she would like to see the Lady Jays do a better job of deciding what shots to take.

“We have to get better at decision-making,” Foster said. “A lot of our players haven’t been in situations where they have to make decisions play after play after play.

“We’re getting better at it, but we have a ways to go to get where we need to be.”

It’s the second straight win and third victory in the last four games for Jefferson City (3-9). The success on the scoreboard coincides with the return of point guard Emmarie Graham.

“Emmarie adds so much to the table, it’s a shame she missed four games after the Kickapoo Tournament because I really thought we could have won a couple of those games,” Foster said. “But it’s great she’s healthy now.”

Graham had just one point in the game, but did add several assists to go along with eight rebounds.

The Lady Jays are back in action next week at the Union Tournament. Jefferson City will open against St. Francis Borgia at 7 p.m. Monday.