Chiefs seek No. 1 seed and 13th consecutive win against Broncos 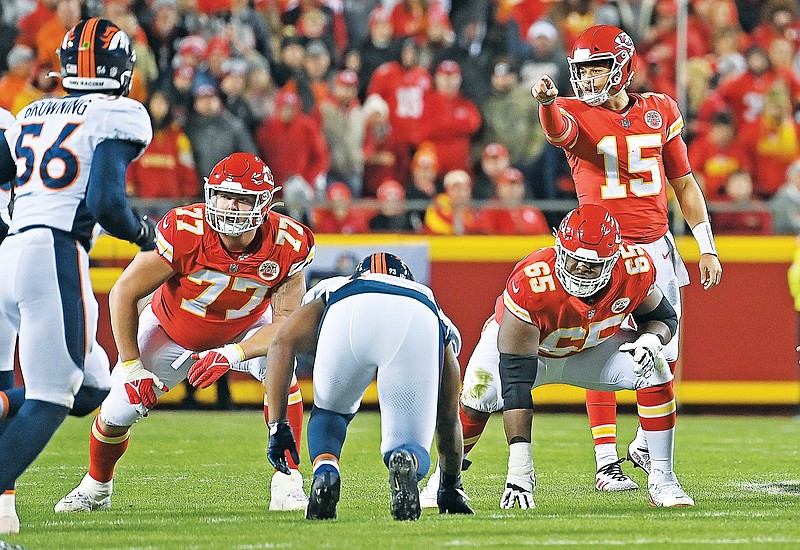 Chiefs quarterback Patrick Mahomes calls out instructions at the line of scrimmage during last month’s game against the Broncos at Arrowhead Stadium. (Associated Press)

DENVER -- Patrick Mahomes sees the regular-season finale this afternoon at Denver as a way for the Kansas City Chiefs to tune up for another long playoff run, no matter when that might begin.

The Chiefs (11-5) lost the pole position in the AFC bracket with their last-second loss last weekend at Cincinnati. So, they’ll have to beat the Broncos (7-9) and the Titans would have to lose to Houston for Kansas City to get the No. 1 seed for the third time in four years.

“I think guys are ready to go. We understand that we can still go out there and do whatever we want to do, it’s just going to take us being better and better each and every week,” Mahomes said. “We know it’s still going to be a tough game this week in the Broncos, playing in Denver. It’s always a tough game, so we’re just going to focus on trying to win this week, and we’ll let the playoffs handle itself.”

Although the Chiefs have dominated Denver with 12 consecutive wins against their AFC West foes, Mahomes doesn’t put up his usual big numbers against Vic Fangio’s defenses.

They beat the Broncos 22-9 a month ago despite Mahomes completing just 15-of-29 passes for 184 yards, no touchdowns and an interception. Travis Kelce and Tyreek Hill were held to a combined 49 yards receiving.

It was reminiscent of last season’s game in Kansas City when the Chiefs trailed Denver until late in the third quarter and ultimately pulled out a 22-16 nail-biter.

“Yeah I mean we’ve been successful as far as winning games, but they’re always hard-fought battles,” Mahomes said. “That defense, I mean they got playmakers everywhere and they run a great scheme, they have a great defensive coordinator, great defensive head coach and they have good feel for playing against us since we play so much.

“It’s always a tough fought battle for us, a great football team, a great defense and playing in Denver is never easy.”

The Broncos, suffering through a fifth consecutive losing season and a sixth straight season without a playoff berth, won’t have star rookie Patrick Surtain II to help contain the Chiefs’ high-octane offense. He’s out with two strained calves.

Drew Lock will make his third straight start in place of Teddy Bridgewater, who suffered a concussion Dec. 19 against Cincinnati. Although he has lost road games to the Raiders and Chargers, he has shown better decision-making and hasn’t committed a turnover.

“That’s just been the theme of our conversations. He’s having fun out there. You love to see it. He’s matured in so many ways. He’s protecting the ball. So, I’m excited that all of his hard work throughout this year is finally on display and he’s finally getting a chance to go out there and compete.”

“Yeah, he’s grown as a player as most guys do in this league,” Hitchens said. “The longer you learn, the better you can play and read stuff, but deep down he’s still aggressive and loves the deep ball. So, similar to a year ago or so, but I think he improved just learning the game as a whole.”

• Chiefs fourth-year running back Darrel Williams, who has taken over as the starter with Clyde Edwards-Helaire out with a shoulder injury, needs just 37 yards from scrimmage to reach 1,000 in a season for the first time. Not bad for an undrafted free agent out of LSU who has played sparingly throughout his career.

“It’s never easy having to wait for your turn,” Williams said, “and when you finally get your opportunity you have to make the most of it.”

• It has become common — and sometimes comical — to see Mahomes chasing after an official to discuss a penalty on the Chiefs. That was especially true last week in Cincinnati, where the Chiefs committed 10 penalties that cost them 83 yards.

“I mean it’s a tough job that they have. They’re seeing some of the best athletes in the world flying around with a lot of contact and stuff going on,” Mahomes said. “Sometimes I’m disappointed I didn’t get the call that I thought we should get, but that’s part of the game and at the end of the day, I’d rather them let us play more than anything.”

• A rash of injuries at inside linebacker have forced the Broncos to dig deep into their depth chart, and they’ve found a gem in Jonas Griffith, a small-school All-American at Indiana State who spent last season on the practice squads of the Colts and 49ers, who traded him to Denver on Aug. 31.

Griffith leads the Broncos with 33 tackles in his three starts in the last three weeks. That would project to a whopping 187 during a full season.