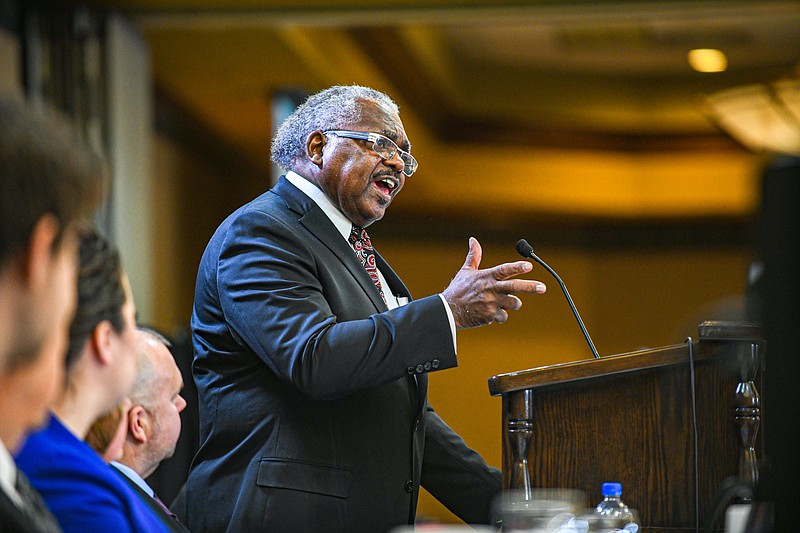 Miles, the longtime pastor of Morning Star Baptist Church in Kansas City, was the featured speaker at the annual governor’s prayer breakfast Thursday morning at the Capitol Plaza Hotel.

Rathert, host of Wake Up Columbia and a longtime friend of Parson, took over hosting the event from Mike Roberts, who hosted the breakfast for several years.

The event brings together scores of state government officials for coffee, reflection and prayer at the start of the legislative session.

“Our world is broken,” Miles said. “It always has been, but recently, I feel like our brokenness is showing more than ever.”

Miles said the United States is fighting a triple pandemic of systemic racism, poverty and COVID-19, as well as all the “interlocking injustices”  in between.

In such a fractured world, it can be hard to know what to do, he admitted, but a turn toward faith and compassion won’t steer lawmakers wrong, he said.

Miles said mankind’s compassion for one another, no matter what political beliefs are, will lead the nation to a “fair and unbiased remedy” to its current “moral crisis.”

Working together, Miles said, people from all walks of life can reshape the consciousness of the state, restore hope and turn the tide on a pervading moral value that has become spiritually “bankrupt.”

Like Miles, Parson recognized the nation’s divisions and suggested Missourians, particularly lawmakers, take a step back and reflect on blessings.

Parson also talked about the courage of Moses in demanding the release of Israelites from slavery in Egypt, which was covered at the Concord Baptist Church prayer breakfast Wednesday.

“I get to thinking of all the challenges we have in this country and in this state today, we just got to go right back to where we were,” Parson said. “Go back to your faith, go back to true leadership and follow the path.”

Parson said God and faith won’t always take problems away, but together they can create a path to deal with the issue and move forward.

“I think if we all focus on that, we’ll have a path to get through this session,” Parson said. “We’ll get through a path to be good leaders, good spiritual leaders to set the example. I think that’s what we’re here for.”