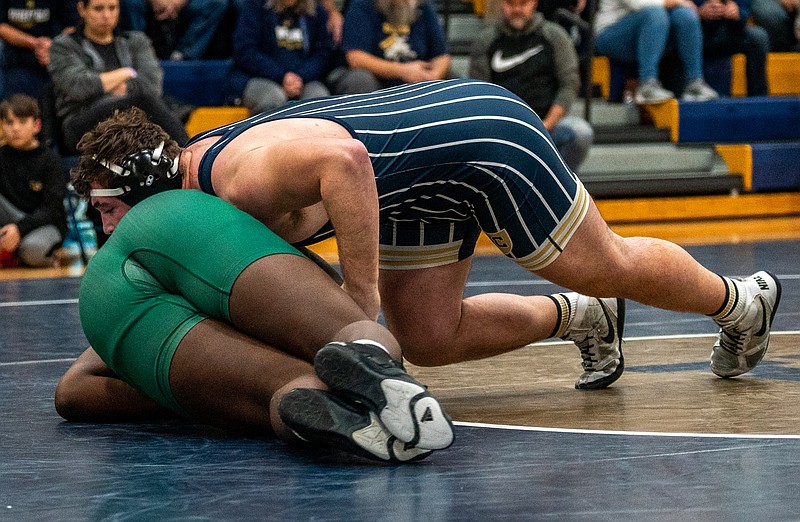 Jack Klebba of Helias works Kosh Oduwole of Rock Bridge onto his back on his way to a pin during their 285-pound match Thursday night in the Helias Gym. (Ethan Weston/News Tribune)

It was over before it even started.

The Helias Crusaders won 10 matches by forfeit Thursday night on their way to a 78-6 wrestling dual victory against the Rock Bridge Bruins in Central Missouri Activities Conference action in the Helias Gym.

“It is what it is, we can’t control what Rock Bridge brings or doesn’t bring,” Helias coach Weston Keleher said. “They’re a conference opponent, we have to wrestle them, so we wrestled the matches we had.”

Helias won three of the four contested matches by fall.

The longest bout of the night came at 152 pounds.

Wyatt Forck of the Crusaders gave up four points in the final :10 of the first period to fall behind 6-1 against Owen Twaddle of the Bruins. Forck then got a reversal in the second period to cut the deficit to 6-3.

“He just keeps wrestling,” Keleher said. “He doesn’t think about giving up two or four points, he knows he can score a lot of points.

“We tell that to kids all the time, they can score a lot of points, don’t let a move or two frustrate you.”

After a scoreless first period at 170, Drake Perkins of the Crusaders got an early reversal in the second that turned into a win by fall in 2:33 against Ben Stephens of the Bruins.

At 285, Jack Klebba of Helias and Kosh Oduwole of Rock Bridge were scoreless after the first period as well. Klebba then got a takedown midway through the second period and got a win by fall in 3:18.

At 145 pounds, Carter McCallister of Rock Bridge won by fall in 1:48 against Jace Duemmel of Helias.

There were five JV/exhibition matches Thursday night. The Crusaders won all five by fall.

Helias is back in action Saturday in the C.B.C. National All-Catholic Duals in St. Louis.

“We got invited to it this morning,” Keleher said. “Somebody dropped out and they invited us to come.”

C.B.C. is the host school. Other teams attending will include Dowling Catholic of Des Moines, Iowa, C.B.C. from Memphis, Tenn., St. Michael the Archangel and Trinity Catholic from Louisville.

“It’s a great opportunity for our boys not only to wrestle some very tough competition, but to get some national attention,” Keleher said. “It’s a chance to look good against some great teams.

“I know I’m excited to go up there as a coach and I know the boys are excited for this opportunity.”

Helias will wrestle five other schools in the one-day duals tournament. Action begins at 9 a.m.