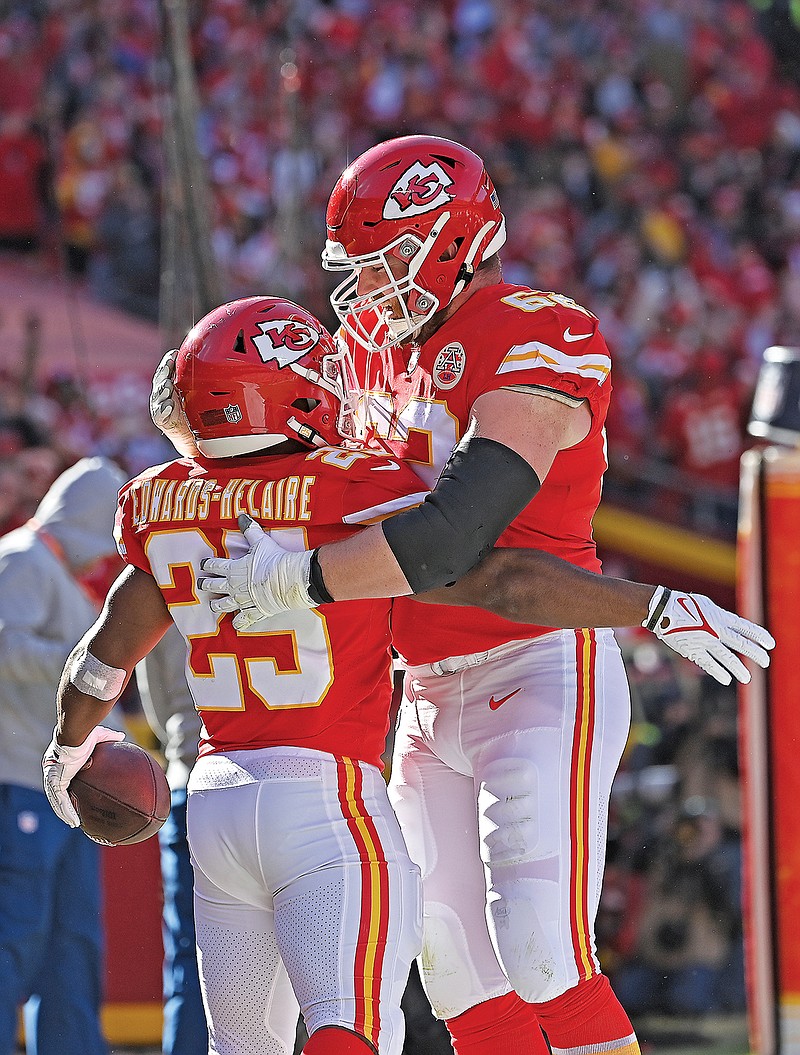 In this Dec. 12, 2021, file photo, Chiefs running back Clyde Edwards-Helaire celebrates with lineman Joe Thuney after scoring a touchdown during a game against the Raiders at Arrowhead Stadium. (Associated Press)

The Kansas City Chiefs will likely be without running back Clyde Edwards-Helaire for the second straight week Saturday when they visit the Broncos in their crucial regular-season finale.

Edwards-Helaire hurt his shoulder early in the second half of a romp Dec. 26 against the Steelers. The Chiefs first feared he had broken his collarbone, but more tests came back negative and they hope to have him back for the playoffs.

When the Chiefs play will be decided this week. The AFC West champions need to beat the Broncos and hope the Titans lose Sunday in Houston to climb back into the No. 1 seed and earn a first-round bye. Otherwise, they would play next week in the wild-card round of the playoffs at Arrowhead Stadium.

The Chiefs haven’t missed Edwards-Helaire too much because Darrel Williams has been outstanding in his absence.

Last week, the former undrafted free agent out of LSU ran 14 times for 88 yards and caught three passes for 19 yards in a last-second loss to the Bengals. Williams also matched a career best with two touchdown runs.

“I thought Darrel played his best game as a professional this past week, and I was very proud of him,” Chiefs offensive coordinator Eric Bieniemy said. “But just like I was proud of him, he’s also disappointed that we didn’t find a way to win the game. So now we’ve just got to continue to grow with him. I think the kid has shown he belongs in this league.”

Williams has played quite a bit the past couple of seasons when Edwards-Helaire has missed time. He’s already run for a career-best 541 yards and six touchdowns and caught 44 passes for 422 yards and two scores, which means Williams needs just 37 yards from scrimmage against the Broncos to reach 1,000 for the season.

“That would mean a lot,” he said. “Some of the guys I came in with — even Clyde, my brother — we both came from a struggle and came from a long way and I’ll get to share that moment with all those guys in the locker room.”

Williams should have an easier time on the ground than last weekend, when left tackle Orlando Brown Jr. hurt his calf in pregame warmups and right tackle Lucas Niang sustained a season-ending knee injury in the first quarter. The Chiefs played the rest of the way with left guard Joe Thuney at tackle and backups at guard and right tackle.

Chiefs coach Andy Reid said Thursday that Brown practiced well and expects to be on the field in Denver.

Notes: The three-week window for rookie DE Joshua Kaindoh (ankle) to be added to the 53-man roster or put on IR for the rest of the season ends in the next couple of days. “I think we have a pretty good shot (to get him back),” Reid said. “It won’t be this week. I mean, right now. But we have a shot at getting him back.” … CB Chris Lammons (ankle) and DT Khalen Saunders (knee) also were designated to return from IR this week, beginning their three-week practice window.