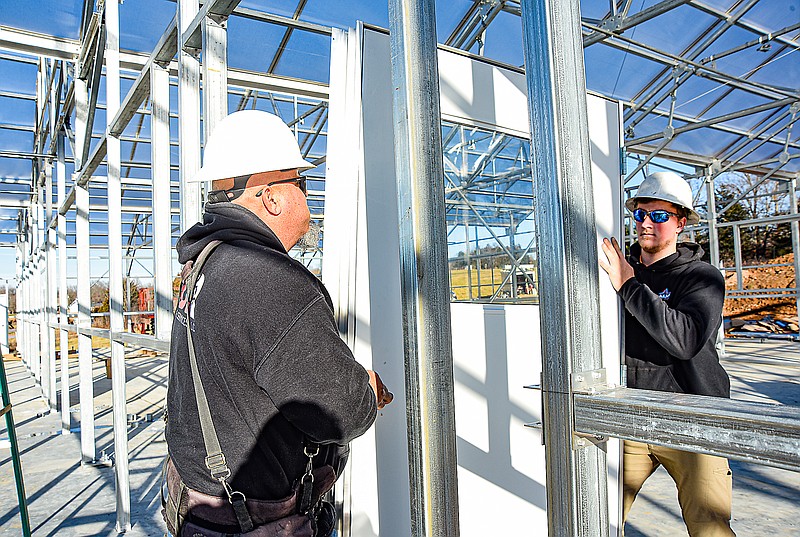 Julie Smith/News Tribune Pat Casey, left, and Hunter McMillian install a door Monday in the new greenhouse building under construction at Lincoln University's Alan T. Busby Farm located about two miles outside of Jefferson City's southern limits. The duo is part of a crew that works for Bruning Builders in Sullivan, a construction company specializing in greenhouse construction. The 54 feet by 115 feet building is made of galvanized steel. Upon completion, it will be covered in translucent polycarbonate material. The building will house three greenhouses and a work room to be used by Lincoln University researchers, professors and students. In addition to this greenhouse, a high tunnel version is under construction next to it. Another set of greenhouses is in a different stage of construction at Carver Farms and all are expected to be completed in May.

The greenhouses and workhouse will be built together as a complex or pod on each farm, LU farm manager Christopher Boeckmann said.

The new complex at Busby will be a first, Boeckmann said, as the university farm doesn't currently have any greenhouses or high tunnels. Carver Farm already has two greenhouses and two high tunnels.

What researchers decide to grow in the greenhouses and high tunnels will vary from site to site, Boeckmann said, but some will be used to raise industrial hemp, quinoa, soybeans, and small fruits and vegetables.

"Lincoln University has added several faculty members that will be doing research utilizing funds that we received from the USDA for different research projects on different topics," Boeckmann said. "And basically now that we have those faculty members and those researchers in place, as they get grants approved we're needing more space for them to perform that research and complete their projects."

High tunnels function similarly to greenhouses, but are more simple and lack the environmental controls of a greenhouse. They're more often used to extend the growing season for researchers, Boeckmann said.

In addition to more growing area, each farm will be getting a workhouse. Boeckmann said they will be used as a space to work and to store supplies and materials.

Boeckmann said construction of the greenhouses has been going well despite some supply chain issues causing disruptions.

"As long as we can remain on the time frame that we now have set up, they should be out and ready to go by late spring or early summer," Boeckmann said.