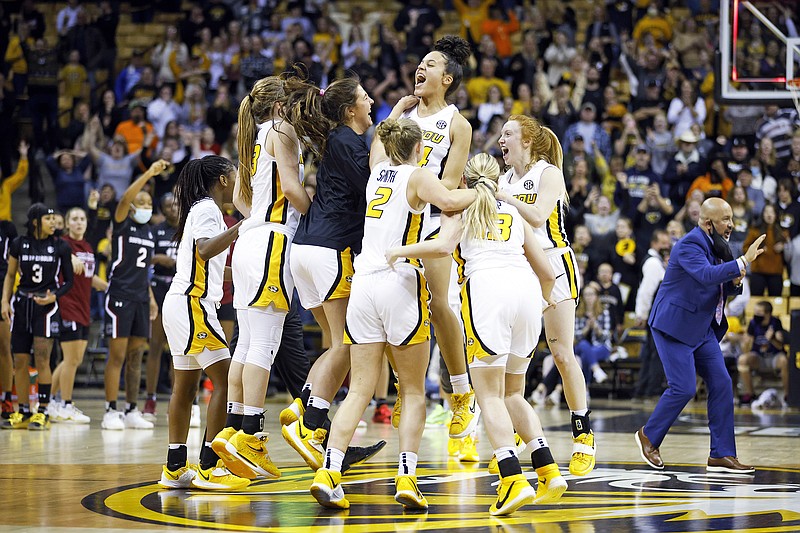 We got a chance to see how the other half lives.

It was a good, not great year, in 2021 for area sports. Local high school teams did not win a state championship, the Kansas City Chiefs lost in the Super Bowl, the St. Louis Cardinals surged to make the playoffs before being eliminated, the Kansas City Royals gave glimpses of being better before finishing below .500, the Missouri Tigers were a .500 football team in the regular season.

It just shows winning is difficult.

But the year definitely closed with a highlight.

With just eight players dressed, the Missouri women’s basketball team picked up perhaps the biggest win in the history of the program Thursday night with a 70-69 decision in overtime against No. 1 South Carolina at Mizzou Arena.

It wasn’t a U.S.-Soviet Union “Do you believe in miracles?” kind of upset. The Tigers (12-2) are a good team, one of their two losses came when they pushed then-No. 5 Baylor on the road before losing 70-68.

But to do it shorthanded due to COVID-19 — the biggest loss being double-double machine Aijha Blackwell that left Missouri without much of a presence inside — was nothing short of remarkable.

Today’s game against Vanderbilt (9-5) in Nashville, Tenn., has been postponed because of a combination of COVID-19 factors in the Missouri program. That’s not a surprise, I’m sure contract tracing with Thursday’s eight available players meant the Tigers wouldn’t be able to field a squad. It would have been a tall order for the Tigers to play well after expending all of the necessary energy to beat the Gamecocks.

Missouri figures to be in the Top 25 when the rankings are released Monday. The Tigers are now scheduled to be back in action Thursday night against Auburn at Mizzou Arena.

In sports, you’re only as good as your next game. If Missouri wants to stay in the rankings, that game is now the biggest of the season.

As the calendar flips to a new year, here are some other things that may or may not happen in 2022 in the local sports universe:

• The Chiefs put themselves into a hole early in the regular season, but have climbed all the way to the No. 1 seed in the AFC. Now they have two games left to make sure they stay there to insure homefield advantage through the playoffs.

I’m not sure today’s game against the Bengals in Cincinnati will go their way, so for the first time since Patrick Mahomes took over as starting quarterback, the Chiefs will have to go on the road at some point before the Super Bowl in the postseason.

• The Helias Crusaders make a strong run at a Class 2 state wrestling title, with the team champ not being decided until the final round.

• There were will multiple area teams advancing the basketball Final Four, with at least one coming home with a state title. And it’s probably not one of the ones you’re thinking of.

• This summer, the Cardinals find enough pitching to get themselves back in the National League playoffs. And the Royals develop enough pitching to make August, if not September, games have some meaning for the first time in years.

• Remember when Eli Drinkwitz was thought of as an offensive genius and Steve Wilks was a bad hire at defensive coordinator? Well, Wilks turned around the Missouri defense after a horrible start, but the Tiger offense was little more than one-dimensional with Tyler Badie for much of the season due to an inability to throw the ball more than 10 yards down the field. This fall, Missouri continues its improvement on defense, and with a new quarterback, the offense becomes a more of a threat.

• The Wisconsin Badgers pick up a large contingent of Mid-Missouri fans with former Helias standout kicker Vito Calvaruso taking his talents from Arkansas to Madison, Wis. Now we just need to figure out how to find the Big Ten Network.

• Also in the fall, the Jefferson City Jays football program will continue to show progress under Damon Wells.

And when the leaves turn, do you really want to bet the Helias Crusaders and Blair Oaks Falcons both fail to make it out of football districts again? I like my money, that’s a bet no one should make.

Here’s hoping 2022 brings everyone good health and happiness. And a Super Bowl title and some MSHSAA hardware would be nice.