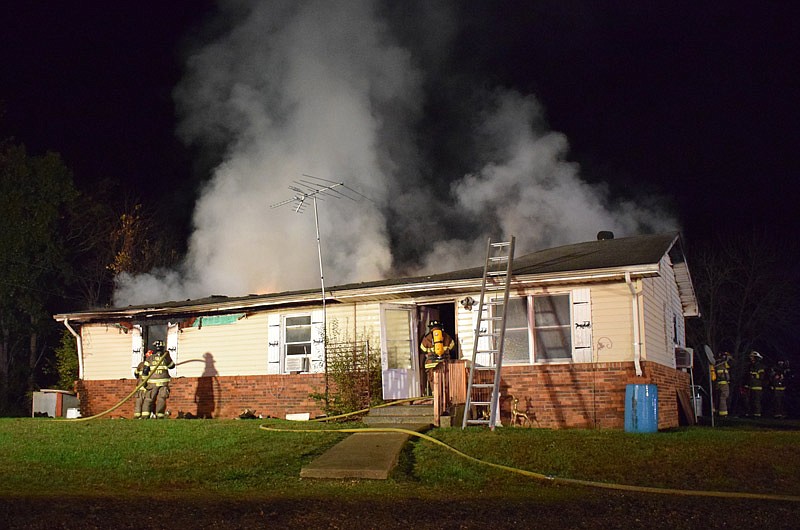 This photo provided by the Cole County Fire Protection District shows firefighters at a house fire Sunday night, Oct. 31, 2021, in the 6000 block of Loesch Road.

Cole County fire agencies are exploring how to better help each other when more support is needed during a fire or similar emergency.

For many years, mutual aid agreements existed between neighboring agencies and it would provide help to fire departments that might need more resources when responding to fires and other emergencies.

Now the neighboring agencies are looking at a concept of automatic aid; it's been talked about since the May 2019 tornado hit the county.

Then four months ago, one of the county fire departments approached JCFD about their interest in doing this, Jefferson City Fire Department Chief Matt Schofield said during the December meeting of the Jefferson City Public Safety Committee.

"Under state statue, once a fire department arrives and assesses what they need at an emergency scene, they can then request additional resources from neighboring fire agencies (mutual aid)," Schofield said. "It's a good thing, but the downside is that by the time you get to the scene, make that assessment and make that request, a lot of time has passed."

"Resources from other agencies can be dispatched at the same time the primary agency is called to an emergency scene," Schofield said. "We see it as a win-win and helps build relationships between the fire agencies."

Schofield said JCFD and the four other fire agencies in the county talked about automatic aid, and the county departments are planning to move forward with the concept.

"We would divide up the city into four zones, and in each one of the zones, they would come in and help us with just one truck and three crew members to respond in the city limits," Schofield said. "Then we would send them one truck with three people to certain areas directly adjoining the city limits."

Once the units arrive on the scene, a determination is made whether to send them back to their own jurisdictions.

Schofield said this would target areas they know they could respond to quickly and likewise for the county departments. He said they had started developing a map and an agreement that will have to be approved by the City Council and boards of the respective fire protection districts before it could go into effect. It could take a few months to complete, he said.

The Public Safety Committee told Schofield to continue to move forward with the plans.

"It's not uncommon for us to be very short during a major incident for 30-45 minutes," Schofield said. "I have to start calling people back in, and it takes time for them to get in. This type of an agreement would allow us to have a buffer during those times to help with other emergency calls we might have in the city."

In other business at the December meeting, Schofield said personnel moved in November to the remodeled Fire Station 4 on Ellis Boulevard.

While some work remains to be done because of a lack of some building supplies, they hope to have a public open house in the late spring or early summer. He added the station remained fully operational while the work took place.