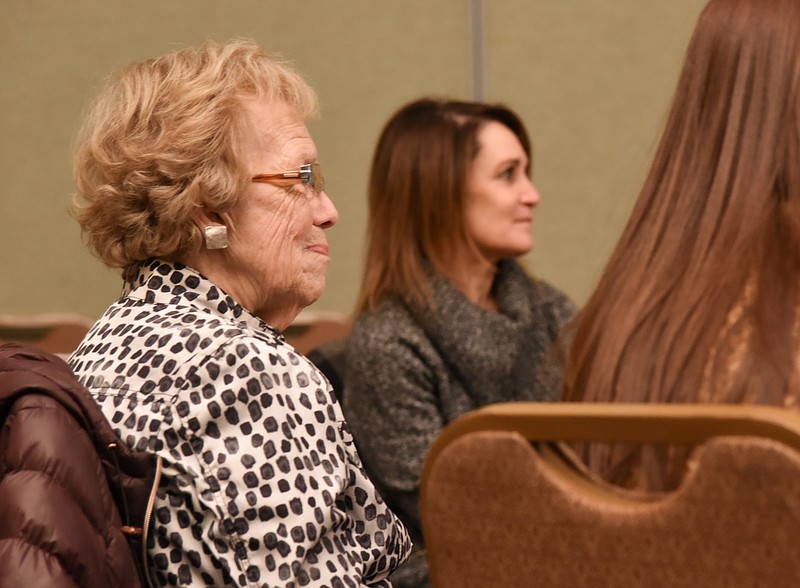 Ruth Ann Schnieders, at left, was recognized by her daughter, Ann Bax, during Thursday's first Women Doing Good sponsored by The Salvation Army and the News Tribune. Organizers recognized 20 local women for their commitment to community and the good they do for others in it. Seated in the background is Gina Clement of Capital City CASA, one of the women recognized at the event. (Julie Smith/News Tribune)

Michelle Brent, a legislative assistant in the Missouri House, goes out of her way to help individuals navigate the systems of state government.

Shirley Bosch, 87, works three hours nightly at the Salvation Army Center of Hope, making sure residents have everything they need to be as comfortable as  possible.

The examples illustrate the diversity of women involved in good deeds within Jefferson City, and the wide-ranging ways they help their communities.

Central Missouri is filled with examples of resiliency — of people doing good, despite challenges and hard times, said keynote speaker Ann Bax, director of the United Way of Central Missouri.

“I’m so proud of our community and the resiliency — and it takes resiliency, perseverance, faith, optimism and gratitude,” Bax said.

All of those things are what ultimately define us all, she said.

“When you do good, you serve your family, your community and your world,” Bax said. “I think our honorees would agree … it serves your own soul. It fulfills you. It gives you a deeper purpose in life. It makes your life more enriching.”

It is a key to happiness, she said.

Life gets better when you share your life with someone else — a lesson, Bax said, her mother taught her.

Bax said she tricked her mother (Ruth Ann Schneiders) into attending the breakfast under false pretenses. It was from Schneiders that Bax learned to do good work.

“She always did good from the moment I can remember her — very unassuming and very humble,” Bax said. “But was always doing good for others. Always looking out for others.”

Life lessons came from her parents.

They taught through their examples, she said.

They were involved with the Samaritan Center when she was a child.

Her mother would pick up day-old bread every Monday at Schnuck’s. Volunteers would serve the bread to needy families at the Samaritan Center.

Her parents were involved in the beginning of the Vitae  Foundation — raising money to save unborn babies.

Bax said she came to understand doing good comes in all shapes and sizes.

“We all have our core values, and we all have our motivators that cause us to do good. So, why do we do good?” Bax asked. “For me, it comes down to the basic foundation that I have running through my faith — do unto others as you would have them do unto you.

“Any life, no matter how fantastic, is enhanced by giving and sharing and opening your heart.”

Leave the world better than you found it, she said.

Each person has a different perspective on how they do that.

Through her work with the United Way, Bax has had opportunities to witness things that aren’t good that happen in the community — children experiencing abuse and neglect, parents struggling to put food on the table, elementary students falling behind on reading skills, and more and more people finding themselves on the streets without shelter or homes.

The good in the community step up to meet those challenges, she said.

Court Appointed Special Advocates (CASA) volunteers come forward to be voices in courtrooms for abused and neglected children, while foster and adoptive families take children in and love them.

Last year, despite the pandemic, the Salvation Army Center of Hope served 25,000 meals out its back door.

“So, so many people doing so much good,” she continued.

They represent women daughters can look up to — to aspire to emulate, Windell said.

Windell added she has a young daughter.

“I hope she can hear about these stories and hear about how she can make a difference in our community,” Windell said.

“We all have the power to change our world for good,” Bax said. “Never forget that, and never doubt that. Not the selfish power — for fame or notoriety — but because it’s the right thing to do.”