Political season gets off to quick start in Mid-Missouri 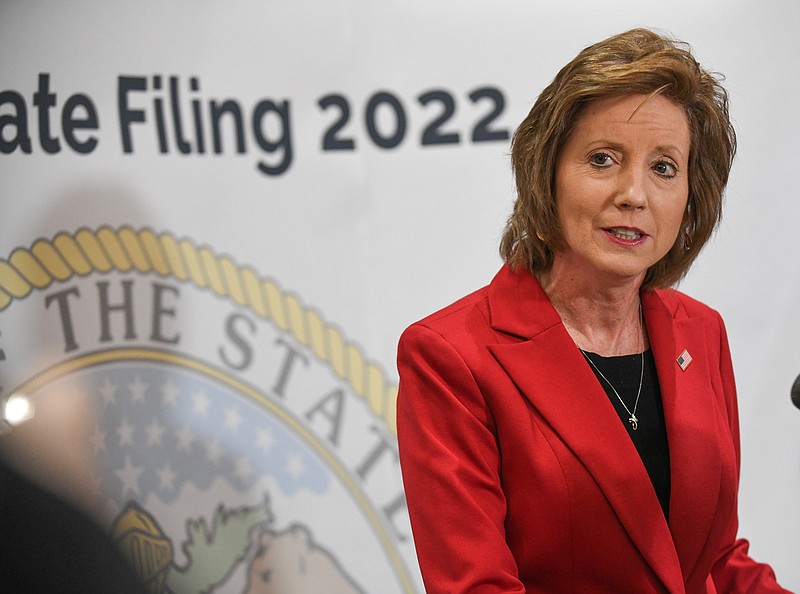 Candidates running for public office were met with a smooth filing process Tuesday.

The Missouri Secretary of State’s Office began registering candidates at 8 a.m. Tuesday for the August primary election. Candidates who make it past the primary will then run in the November general election this year.

Throughout the morning and into the early afternoon, candidates reported a smooth process.

After drawing a number to determine their place on the ballot, candidates filed required documentation with the Secretary of State’S Office and left the building as official candidates.

Secretary of State Jay Ashcroft, the state’s top election official, said he was encouraged to see the number of people filing to run for office on the first day.

“When you see this many citizens that are willing to try to make a difference and go through the hard work of doing it, it makes me feel better about the future of our state,” he said.

Several candidates are vying for the seat U.S. Sen. Roy Blunt is vacating for retirement, and they weren’t holding their punches Tuesday.

Greitens, who resigned as governor in 2018 amid allegations he took nude photos and sexually assaulted a woman, is the Republican frontrunner in most polls and said he’s a different person from when that incident occurred.

Greitens said the state needs a leader with courage, compassion and clarity. He touted his response to the Black Lives Matter movement and support for foster children and pro-life policies as governor.

“It’s not conservative to tie a woman up in your basement and to assault her and to bring shame and disgrace on our state,” Hartzler said. “And he did. Missouri deserves better.”

Hartzler said she would support whoever the Republican nominee is, unless it becomes Greitens.

Hartzler said she would bring experienced conservative leadership to the Senate, touting her support for the military and foreign allies, as well as efforts to improve economic conditions and secure the border.

As a lifelong farmer, small-business owner and former teacher, Hartzler said she believes she’s the candidate that best represents Missouri.

Hartzler also took aim at Schmitt, another candidate in the Senate race, by aligning his time in the Missouri Senate with interests of the Chinese government.

Schmitt said those attacks are a misrepresentation of his record, pointing out that he is currently suing China over the COVID-19 pandemic.

Schmitt said a track record of success separates him from other candidates in the field, noting that he’s the only candidate to have won a statewide race twice.

Schmitt said his lawsuits against school districts that require students to wear masks, his lawsuit against China and his lawsuit over the 2020 election results show that he is committed to conservative ideals.

Long, the Republican congressman from Southwest Missouri, said he’s running to maintain a conservative voice in the Senate.

“We need to keep a ruby red seat ruby red, and I’m the guy that can do it,” he said.

Long said he has some of the highest ratings among conservative organizations that rank politicians based on previous votes.

“I’m by far the most conservative,” Long said. “I know that Vicki found some obscure website that’s based on legislation that’s like bills you sponsor and bills that you co-sponsor. It has nothing to do with being conservative, but she’s portraying it to be.”

Long said he has experience with crowded races because he won an eight-candidate primary when he first ran for Congress. He said expectations for his outcome were low, but he won by a wide margin. He’s expecting similar results for the Senate primary.

If he’s not the candidate, Long said he will be done with national politics.

“I took a six-term pledge, and this is the end of my six years. I’m up or out — I’m going home or I’m going across the hall to the Senate,” he said. “And I think that I’m the one that can get things done in the Senate and keep a ruby red seat ruby red with a true conservative, not someone who says they are conservative but aren’t.”

U.S. Sen. Josh Hawley, who is not up for re-election, endorsed Hartzler in the race.

The candidates are also battling for an endorsement from former President Donald Trump. Several said they had talked to Trump in recent days.

There are also a couple Democrats running for Senate.

Lucas Kunce, a Democrat from Jefferson City, leads the Democratic field in recent polls and has raised the most money of any candidate in the race.

“The people in this town took care of me as a kid. When we went bankrupt, they brought lasagna and casserole by the house to make sure we made it,” Kunce said. “The thing that I’m focusing on is making sure no matter how I run the race and everything, the number one most important thing to me is only owing those people — the people in this community who took care of us.”

Kunce, a veteran of the wars in Iraq and Afghanistan, said Missouri’s representation in Washington hasn’t always had the state’s best interests in mind and that he would support diverting some military funding to address domestic issues at home.

“I drove by my old neighborhood on Dunklin Street here earlier today, and do you know what you see? You see abandoned houses, you see a boarded up gas station, you see the grocery store that used to let my mom write a check a few days before the end of the month so we could actually make it. It’s gone. People are struggling — they’re on their own,” Kunce said.

Kunce, a graduate of Jefferson City High School, said he supports universal healthcare, raising the minimum wage and making federal investments in Missouri and throughout communities in the United States.

Spencer Toder, a St. Louis Democrat running for Senate, said he’s running because he believes Missourians have been left behind.

Toder said he isn’t focused on fundraising numbers or political experience of his competition, but rather building trust with voters around the state.

He said his first priority if elected would be to support voting rights reform, but he also supports universal Medicare, climate change reform and better access to quality education.

State Rep. Sara Walsh, R-Ashland, filed to run for the 4th District as did Kalena Bruce, a Republican farmer and small business owner from Stockton.

The 4th District stretches from the western border of the state to Pulaski County and most of Audrain County.

Walsh, who was the first to announce her candidacy last summer, was among the first in line to officially file Tuesday.

“Inflation is out of control, people are pouring over our borders into our country, there’s vaccine mandates that are being pushed, there’s a lot of crazy things that are happening, and I am running to fight for God and country, to fight for the American dream,” Walsh said.

If elected, Walsh said, she would focus on curtailing government spending, such as money spent on federal unemployment benefits, and curbing the “radical, socialist agenda” of Democrats.

Walsh said she believes Missourians are tired and angry, and want someone who will fight for conservative values in Washington. She said her experience in the Missouri General Assembly has shown she can be that person.

Walsh pointed to her support for a 7-1 congressional map, the legislation she is sponsoring to repeal the gas tax approved by the state Legislature last year and her pro-life stance as evidence of her conservative values.

“I’ve got a track record of fighting for all these different things that are key, core issues, that are platform issues to our party, to our values, to our way of life here in Missouri,” Walsh said.

Bruce, another candidate for the 4th district, doesn’t hold public office, which she said is an advantage.

Despite the lack of experience in office, Bruce said she has experience delivering results. In addition to being a fifth generation farmer and running an accounting firm, Bruce said she was involved with former President Donald Trump’s Tax Cuts and Jobs Act in 2017.

If elected, she said she will be focusing on repealing the estate tax, agricultural regulations and the “reaching, socialist agenda” of Democrats.

Candidates running for the U.S. House don’t yet know what the district they’re running for will look like as the Missouri General Assembly has not yet passed a map with updated districts following the 2020 Census.

Bruce said the lack of solidified congressional districts has been a challenge, but she is confident the General Assembly will agree on a map.

Smith said he served on the redistricting committee when he was in the state Legislature 10 years ago and it’s a tough job to draw district lines.

“They’ll finish it, they’ll pass a map and we’ll know exactly what the boundary lines are,” Smith said about running for a district that isn’t yet decided. “It needs to be a map that reflects the values of Missouri and reflects a rural state and makes sure that rural districts are preserved.”

Ashcroft said the Secretary of State’s Office will follow the laws decided by the General Assembly as it relates to redistricting.

Rep. Rudy Veit, R-Wardsville, and Rep. Dave Griffith, R-Jefferson City, have both filed for re-election to the Missouri House.

Griffith, who filed for a third term, said he sees his time in the House as the continuation of a lifelong mission from God to serve others.

“Being able to listen to the people that are my constituents, people that have got real life issues, and if I can do something that can affect those and to help those folks, I feel like that’s what I’m called to do,” he said.

Griffith, who is chairman of the House Veterans Committee, said he will continue to support veterans if re-elected, but he’s also hoping to make progress on foster care and adoption issues.

This session Griffith filed a bill that would require the state to conduct a due-diligence search to connect foster children with a relative instead of them being held in state custody. He said he hopes the bill makes it across the finish line so more progress can be made.

Veit, who also filed for a third term, said he’s looking forward to the possibility of serving for a couple more years.

Veit said he’s aware of at least one candidate who has filed to run against him.

Veit said his experience as an attorney and his past two terms in the House have set him up to accomplish more priorities if re-elected.

“The more years you’re up here, the better you learn the system and the chances of accomplishing things go up every time you get re-elected,” Veit said. “So I’m looking forward to the opportunity to get more things done.”

Veit said he’ll be focused on working with other state lawmakers to accomplish priority legislation and keep the government functioning. He said he understands why the state government operates the way it does and that the relationships he’s built while serving would be beneficial for getting legislation passed in the future.

Callaway County will be represented by a new face, however.

Jim Schulte, a Callaway County Republican, is running for the seat Rep. Travis Fitzwater, R-Holts Summit, is leaving because of term limits.

He said his biggest concerns are related to funding veterans homes and maintaining cemeteries. Schulte said he also wants to support first responders and will work to address any needs they might have.

“I’ve been watching what’s happening to the whole community, country, everywhere, and I just couldn’t stand by and not try and make a difference anymore,” Schulte said.