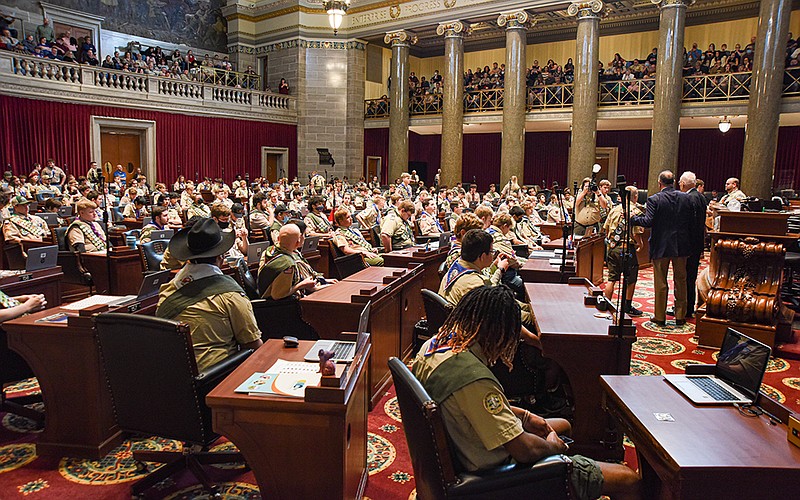 During a ceremony Monday on the floor of the Missouri House of Representatives at the Missouri state Capitol in Jefferson City, 186 Eagle Scouts were recognized for achieving that rank. Each scout received an Eagle Scout pin and posed for a photograph with Boy Scout leaders and elected officials. The ceremony was followed by lunch for the Scouts and guests in the third floor of the Capitol Rotunda. (Julie Smith/For the FULTON SUN)

JEFFERSON CITY, Mo. -- Wearing their scouting uniforms covered in badges, more than 180 new Eagle Scouts from across Missouri gathered at the state Capitol to be recognized for earning the highest rank in Scouts BSA.

John Fabsits, scout executive/CEO of Scouts BSA Great Rivers Council, said the importance of the event is to recognize the Eagle Scouts for the time and dedication it took to achieve the ranking.

To become an Eagle, scouts must earn at least 21 merit badges, be a field-tested peer leader in a Scout troop and lead an extensive service project that benefits a community organization. It can be achieved in two years, but for many it takes about four to seven, Fabsits said.

After picking up their certificates, the Eagle Scouts and their families gathered in the House chambers to hear remarks from Rep. Michael O'Donnell and Lt. Gov. Mike Kehoe.

Becoming an Eagle Scout is a feat accomplished currently by only 6 percent of Scouts.

"This is an accomplishment that will define you for the rest of your life," said O'Donnell, who is also an Eagle Scout. "Remember that you represent all of us -- your fellow Eagle Scouts -- in all that you do, good and bad. This may seem like a weighty responsibility, and that's because it is."

In his speech, Kehoe reflected on his experiences as a Boy Scout when he was a child, noting one camping trip changed his life.

"It was an experience that literally changed my life and outlook of the world as far as responsibility, being able to understand how to accomplish things and set goals and objectives," he said. "From a very early age, scouting had a profound impact on me."

Becoming an Eagle Scout, Kehoe said, puts people in a position that differentiates them from everyone else, leading to many opportunities in life.

"You should be proud of that. And I know you will be, and it's gonna take you places. You just need to make sure when that door opens, you take advantage of it."

But the most significant part of becoming an Eagle Scout, he said, is being established as a leader.

"Eagle Scouts are leaders," he said. "Leadership has a huge responsibility on your shoulders ... True leaders make the people around them better, and that's what leadership is all about."

After the speeches, each Eagle Scout was called up individually to be recognized.

Isabel Collins, from Sikeston, joined Scouts her junior year of high school about three years ago.

"It sounds cocky, but I kind of like proving myself amongst men and boys that girls can really do anything they set their mind to, so that's my favorite part."

In 2019, the Boy Scouts program began allowing girls to join and was renamed Scouts BSA. The Class of 2020 was the first class with female Eagle Scouts.

"Growing up and watching my brother and my dad do things and not being able to just because I was a girl really bothered me," Collins said. "So being able to say I'm a female Eagle Scout is a huge honor."

The leadership skills she's learned through Scouts have helped Collins tremendously, she said.

"I was very shy, very timid, and I think scouting really brought me out of my shell," she said.

Christopher Llewellyn, 17, of Kirksville, said he achieved the Eagle ranking a year ago, but it still hasn't sunk in yet. The camping and leadership skills he has learned have been his favorite parts, he said.

"It's been a valuable leadership experience for me," he said.

Alex Warlen, of Warrensburg, also said he has enjoyed the camping and valuable leadership experiences he's had. He said it took him about eight years to become an Eagle Scout, and he's proud of the accomplishment.

"It's a great accomplishment," he said. "It took a long time."

In the accompanying video, view clips from Missouri State Eagle Scout Recognition Day as Eagle Scouts talk about what they’ve learned through scouting. 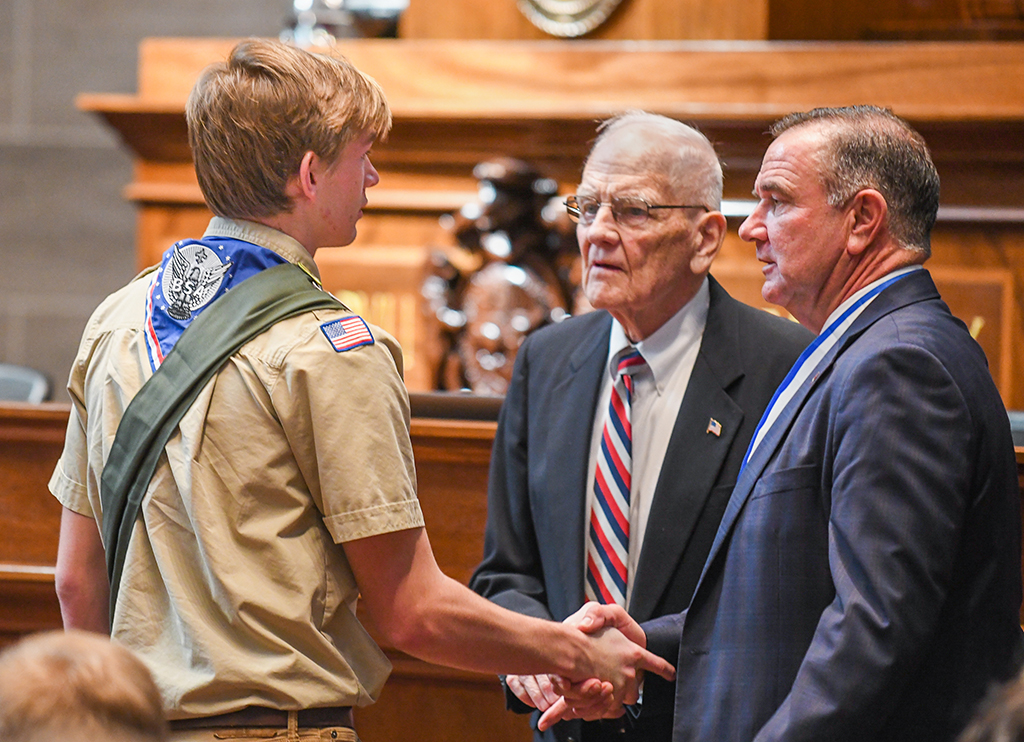