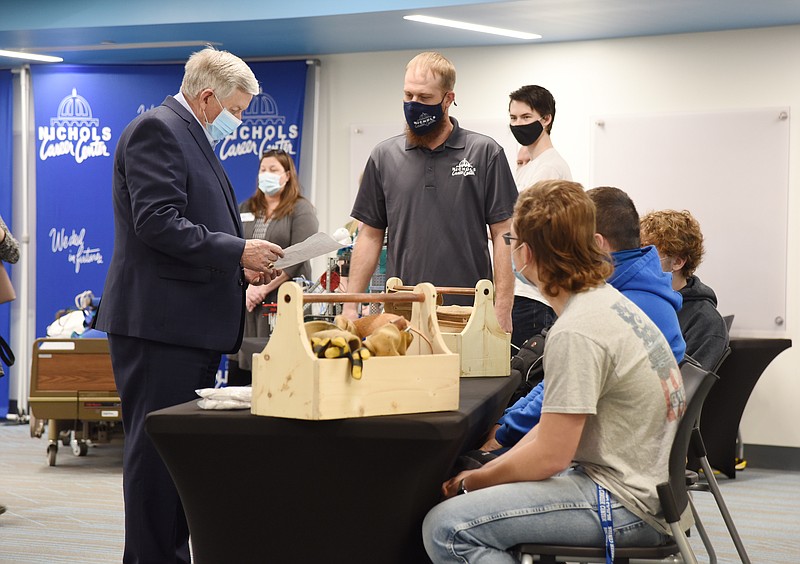 Gov. Mike Parson visits with staff and students in March 2021 at Nichols Career Center during a visit to the Jefferson City center. (Julie Smith)

In his State of the State address, Gov. Mike Parson announced his plan to offer $20 million to career and technical centers across Missouri.

Faced with the possibility of receiving a piece of that additional funding, Cody Bashore, director of Nichols Career Center, said there are plenty of options for how it could be spent.

“A lot career centers in the state of Missouri were built around the mid- to late-70s, so a lot of them are in need of repair infrastructure-wise. We just went through a renovation a few years ago during J+C, and we got a lot of those renovations taken care of. But we do have some aging equipment such as a paint booth, an autobody that’s a little over 20 years old, probably pushing 30 years old,” Bashore said.

He also listed expanded program offerings that students are interested in as an area where Nichols might like to direct additional funding, including criminal justice or cosmetology.

Bashore said Nichols Career Center has been looking for other grants that could help launch an early childhood program.

“Career and tech ed is something that can be expensive with the equipment involved, and the high dollar equipment that’s used in some of our programs,” he said.

He added that funds could also be used to create another lab space for the Building Trades program.

“The Building Trades class currently builds a home each year for Habitat for Humanity, but we would like to provide that program with a lab space where they could work on smaller projects when they are waiting on contractors and/or materials and supplies for the house or if the weather is poor. These projects would include practicing their skills on things such as yard sheds or similar smaller scale projects,” he said.

Bashore said he would work with the maintenance department to determine the best place to direct any funds.

He also said he was excited to see how much Nichols could get, though with construction costs rising, less can be done with the money obtained.

“Hopefully they get through this congressional redistricting filibuster and they could get those funds appropriated accordingly,” he said.

Overall, Bashore has appreciated the increasing support for career and technical education.

“There for a time, career and technical ed kind of had a stigma with it that it was only for those kids that didn’t want to go to college … and I’m real excited to see the momentum that’s kind of happening with career and tech ed, and the attention we’re getting from the governor and the Legislature,” he said.

“A lot of companies out there are in need of qualified employees right now, and hopefully we can help meet that demand,” Bashore said.