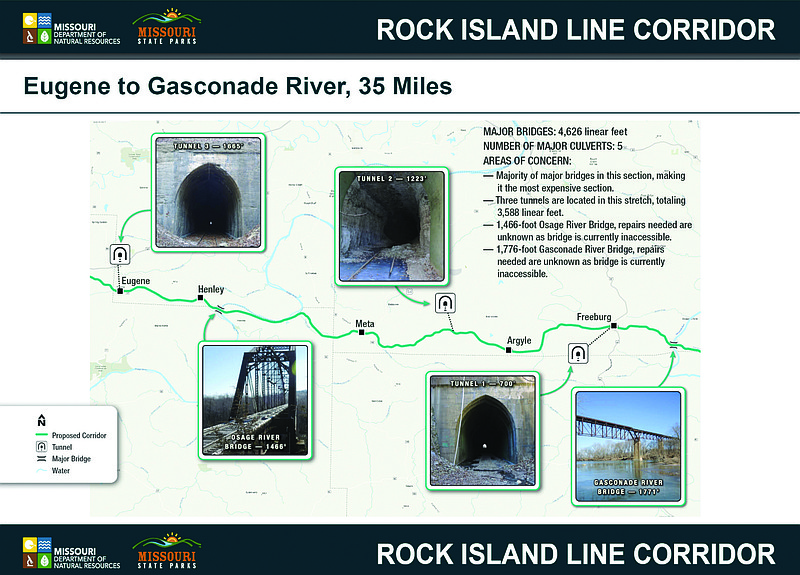 Nearly half of the funding for the development of the Rock Island Corridor Trail will need to go toward a 35-mile section in Mid-Missouri, state officials estimate.

The 144-mile Rock Island Trail, a proposed hiking/biking trail in Central Missouri, is expected to cost more than $100 million to develop; the 35-mile section from Eugene to the Gasconade River will cost about half of that amount, according to an informational report from Missouri State Parks a division of the Missouri Department of Natural Resources (DNR).

The section is home to the 1,466-foot Osage River bridge and the 1,776-foot Gasconade River bridge, both of which are inaccessible and in need of significant repairs. DNR estimates it will cost around $28 million for construction on the two bridges.

Other areas of potential concern in the section from Eugene to the Gasconade River are three large tunnels in Eugene, Freeburg and between Argyle and Meta totaling at 3,588 linear feet.

“Headwall repairs, seepage/drainage repairs and liner repairs are needed at each tunnel. The 1,200-foot tunnel in Argyle/Meta has no liner and will need major improvements before being usable,” a Missouri State Parks condition summary said about the tunnels in the section.

The total estimated contract construction cost for the 35-mile section is just under $40 million, while the total section cost, including construction, real estate and engineering, is estimated to be around $50 million.

The second most expensive section to develop will be the 38-mile stretch from Windsor to Versailles, which is missing bridges over U.S. 52 and U.S. 65, and has many smaller bridges in need of decking and abutment work. The total cost for this section is estimated to be just under $23 million.

In his 2022 State of the State address, Gov. Mike Parson announced his plan to allocate $69 million from the American Rescue Plan Act (ARPA) to the development of the trail.

“This year, we have an opportunity to solidify this state asset and economic driver and expand tourism,” Parson said in his address. “We can help establish the largest circular rail-to-trail network in the United States and a world-class, one of-a-kind destination for travelers coming to Missouri … while also supporting businesses and creating jobs.”

Missouri is already home to the longest recreational rail trail in the United States — the Katy Trail. The Katy Trail stretches nearly 240 miles from Machens to Clinton; the addition of the Rock Island Trail would “position Missouri as the national leader in trail oriented outdoor recreation. The potential for creating unique outdoor adventures for residents and visitors will expand significantly,” a Rock Island Trail opportunity analysis by the University of Missouri Extension said.

Also citing the positive economic impact that trail development can have, the opportunity analysis noted “the Katy Trail Economic Impact Report provides the clearest evidence of what the State can expect from Rock Island Trail users. The 2012 study documented a total impact of $18.5 million, 367 jobs and $8.2 million in payroll. The average visitor spent $45 per person.”

The trail primarily passes through rural communities many of which experience above average poverty rates.

“The 2016 poverty rate for the 19,800 people in these communities is 26.9 percent compared with 15.3 percent for the State and 19.9 percent for all of Rural Missouri,” the opportunity analysis said. “Because rural trails bring users into direct contact with small town centers and retail establishments, there may be more opportunity for economic impact than exists along urban trails.”

DNR accepted ownership of the corridor in December after the Missouri Central Railroad Company, a subsidiary of Ameren Missouri, donated its right, title and interest in the corridor to the state. Early stages of planning and surveying of the trail are currently under way.