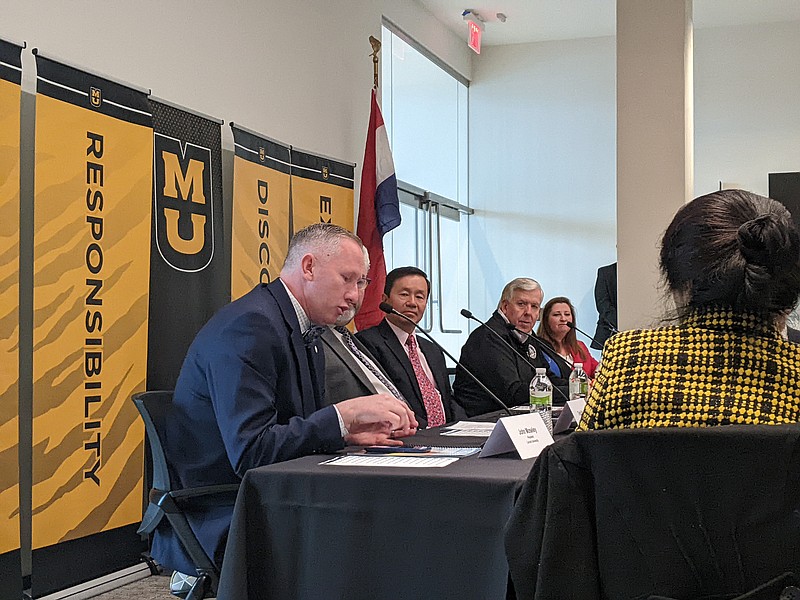 Lincoln University President John Moseley spoke about how LU would use $20 million in funding Gov. Mike Parson has proposed for a capitol improvement project on campus. Moseley and several other higher education and workforce development leaders were invited to a roundtable discussion with the governor Friday morning at the University of Missouri. photo by Ryan

Gov. Mike Parson and higher education leaders from around Mid-Missouri are hoping to preserve the partnerships forged out of the COVID-19 pandemic.

"We now know how important those relationships were during the pandemic, there's no reason we can't build off that and make this better to keep those communication lines open in all areas," he said.

Parson described federal funds flowing into the state as a once-in-a-lifetime opportunity to make long-term investments that improve the future for Missourians.

He said he wants to develop a foundation this year and build on the proposed investments with the established relationships into the future.

"We're going to make sure that this money is going where it needs to go, and we're going to get something out of it," Parson said. "I will be the best partner that I can possibly be at the state level."

Parson said his first priority is investing in Missouri residents by supporting services they can access.

She said factors like lack of broadband and childcare access are major barriers to workforce development and adults engaging in higher education.

The governor's proposed budget includes a 5.4 percent increase to core appropriations for all public colleges and universities in the state, which costs roughly $51.6 million.

The proposed budget also includes funding for capital improvement projects at all public colleges and universities.

Parson said he is expecting the higher education institutions to be fully committed and investing their own resources.

"There's some exciting stuff going, whether you go to a university in the state or the community colleges," Parson said. "There's going to be some tremendous expectations on them to do more, and we're going to push for that every day. Whatever we're going to do, whatever we're going to invest in, we want return on that money, and we want the data to show that it's working."

Moseley said it's been beneficial to have the governor's support and developing partnerships with state and local officials will be important for some of the initiatives Lincoln University wants to get off the ground.

Parson has proposed a $20 million state appropriation for Lincoln to build a $40 million Health Sciences and Crisis Center.

"Education, we believe, not only changes the lives of our students but for generations after them," Moseley said. "And so with the governor's proposed budget, the projects that would benefit Lincoln we think would have a significant impact on our future enrollment and make Lincoln a place that a lot more students want to come and study."

MU President Mun Choi said he made a promise to strengthen Mizzou's partnership with Lincoln University, specifically in the area of agriculture research and extension.

Lincoln and MU are Missouri's only land-grant institutions, which means they receive federal and state funds specifically for agriculture research and extension.

"Strengthening that relationship benefits the entire state," Moseley said. "Right now, Lincoln serves 47 counties through extension, so partnering with MU gives us a chance to maybe expand that reach a little greater."

Lincoln and MU have different missions, Moseley said, but by partnering together, the two can serve the state, Midwest and country in a greater capacity.

"We are excited about what we believe to be a great time to be at Lincoln University," Moseley said.

He also said he appreciated Choi being one of the first to offer help when Moseley began leading Lincoln.

Parson encouraged the higher education and workforce leaders to maintain their partnerships, as well as the hustle and energy spurred by the pandemic.

"Think of what we did when we communicated with one another and what we've done in a year's time to fight a pandemic," Parson said. "Imagine what you can do without the pandemic."