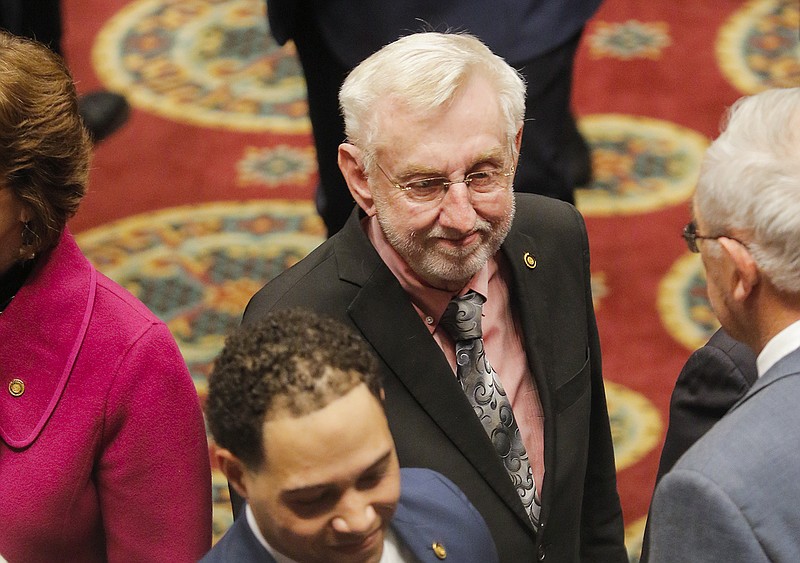 Rep. Rudy Veit, R-Wardsville, shakes hands with state legislators Wednesday, Jan. 15, 2020, during the entrance of Gov. Mike Parson at the annual State of the State address at the Missouri state Capitol.

He has offered both bills for consideration in previous years.

The chamber last year unanimously passed a version of House Bill 1548, which creates a fund to help poor counties pay for capital cases that require changes of venue. However, it never made it through the Senate.

"A lot of counties do not have the facilities or anything needed to handle the capital murder case," Veit said.

The focus is on rural counties, Veit added.

If trials are sent to other counties, such as Cole, and juries end up being sequestered, the bill can ring up quickly, he said. It's a burden on the county where the trial occurs if the originating county doesn't have the money to pay the bills.

"If you're a small county, you're more likely to accept a plea rather than go to trial," Veit said.

The bill limits what a county that holds the trial can recover.

"Juror costs, and maintaining juries is the main thing we're covering," he said. "The bottom line is that it is not fair to counties. They don't have a choice but to accept these changes of venue."

Elyse Max, executive director of Missourians for Alternatives to the Death Penalty, argued the bill puts a bandage on a larger problem.

"One thing that we agree on is that the death penalty is expensive," Max said.

She said Missouri has never studied the costs of the death penalty.

Donnita Patterson-Brown, a Pulaski County representative of the NAACP, also questioned the cost of capital cases.

Reading from a statement by Rod Chapel, of Jefferson City who is president of the Missouri chapter of NAACP, she said penalty is cruel and unusual punishment that is rife with errors and violates the Constitution.

"It is unfair to ask the taxpayers of Missouri to pitch in when the state has never done a cost study on the death penalty," she read. "Murder rates are higher in states that have capital punishment than in states that don't."

She said the death penalty is much more expensive than the sentence of life without parole.

Veit also presented HB 1547, versions of which also had been through committees numerous times. The bill requires offenders (or suspected offenders) who must wear ankle bracelet monitors to recharge them. Existing law has no penalty for not recharging the devices (which disables it).

The devices cost hundreds of dollars. So, lawmakers in the past created offenses should those required to wear the devices destroy them to remove them.

Rep. Robert Sauls, D-Independence, said he had concerns about charging someone with a felony simply for forgetting to recharge the batteries.

Veit reminded Sauls that his concerns about the bill last year led to the inclusion of a clause concerning intent to allow batteries to run down.

Veit argued there is greater significance for someone suspected of a felony not charging the batteriess.