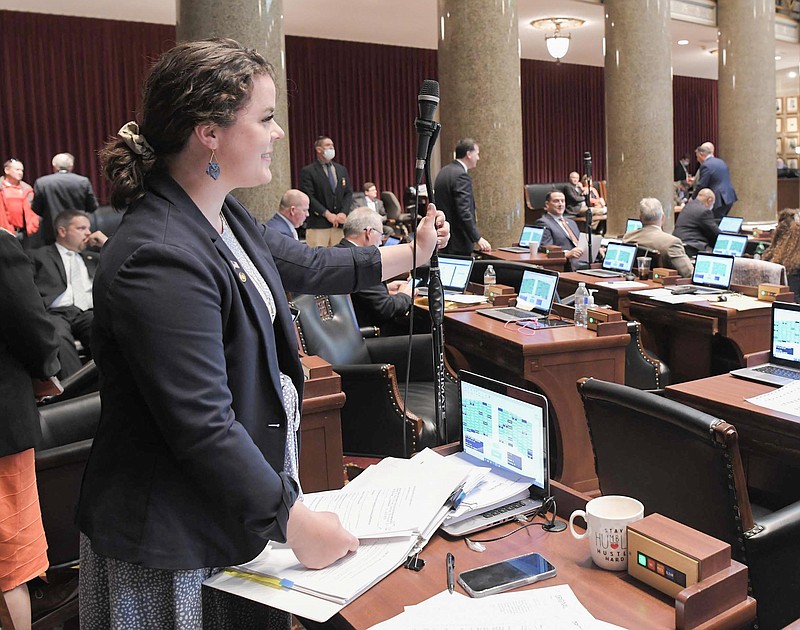 Missouri legislators have proposed about two dozen bills relating to abortions and subsequent health care in the 2022 session.

A majority of the proposed legislation reflects the conservative views of the Republican-led General Assembly while a few would establish more abortion rights and protections for abortion-related services.

The farthest any House bill relating to abortions has gotten in the Legislature is House Bill 2012, sponsored by Hannah Kelly, R-Mountain Grove, which passed through committee and is expected to see floor action soon.

The bill would prohibit the use of, or the donation of, fetal tissue from an abortion for any purpose, except to diagnose anomalies, paternity or for any other law enforcement purposes. Violation of these provisions would be a class E felony and be subject to license suspension or revocation.

The bill also creates the offense of hoarding of aborted human remains for any person who possesses all or part of two or more bodies of aborted fetuses. If passed, violators would be guilty of a class D felony and undergo mental evaluation and treatment.

"We believe that HB 2012 attempts to impose one religious' belief over all others on the use of fetal tissue," Amy Kuo Hammerman, of the National Council of Jewish Women St. Louis, wrote in a testimony in opposition of the bill. "As a practicing Jew, this goes against my religious beliefs and the traditions of my faith. Judaism differentiates between potential life and life. We believe that a soul only enters the body upon birth and taking the first breath."

The current summary of the bill notes witnesses who testified in favor of the bill say it would protect the dignity of a human person if passed, while witnesses testifying against the bill says it does not advance the public health and well-being of the state and undermines common medical practices.

Testimonies toward the HB 2012 came from a variety of groups, including the Missouri Catholic Conference, Advocates of Planned Parenthood of the St. Louis Region & Southwest Missouri, Pro Choice Missouri and more.

Just behind HB 2012 in the legislative process is HB 1854, sponsored by Nick Schroer, R-O'Fallon.

Similar to HB 1854, Senate Bill 667, sponsored by Sen. Eric Burlison, R-Battlefield, states no public funds shall be expended to any abortion facility, or affiliate or associate thereof, including for MO HealthNet reimbursement; it was voted do pass by the Senate Committee on Seniors, Families, Veterans and Military Affairs on Jan. 26 and has yet to see further action.

SB 667 has moved the farthest among abortion-related bills in the Senate.

Of the 24 abortion- related bills only five were sponsored by Democrats. Three of those five bills have similar text that would require all organizations that provide pregnancy-related services or counseling to provide medically accurate and unbiased information on all relevant reproductive health options.

"A lot of these reproductive health care bills have been filed for years. They haven't seen the light of day, but it is still very important," said Rep. Emily Weber, D-Kansas City, sponsor of two abortion related bills.