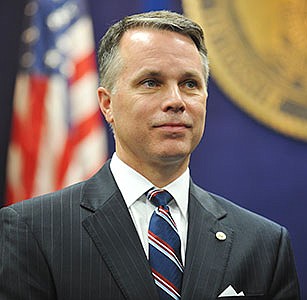 State lawmakers are questioning the Missouri Department of Transportation's plans for historic funds flowing into the department.

Following the implementation of a new state tax on gasoline and the passage of the Bipartisan Infrastructure Act in Congress, MoDOT is looking at more funding than anytime in the past decade.

MoDOT Director Patrick McKenna provided the department's annual report to the General Assembly's Joint Transportation Committee on Monday afternoon and said some of the additional funding will be used to address nearly 25 percent of the state's unfunded transportation needs in the next five years.

"It's kind of an extraordinary thing," McKenna said "I have not been able to report that kind of progress ever in my tenure, and for the department, almost 30 years."

Additionally, the Missouri Highways and Transportation Commission sued the state last month seeking clarity on whether it has the authority to use the State Road Fund, which will be bolstered by the new gas tax, to provide employee raises.

Brown, co-chairman of the Joint Transportation Committee, said those requests were poorly timed by the department.

"It's kind of a slap in the face to us that sold this to our constituents as Republicans," Brown said.

"We need the citizens to see the benefits of this fuel tax and what it's doing for them to be supportive of not only us, but to trust MoDOT as well," he continued.

Brown said the gas tax was a huge lift for Republicans in the House and Senate, and he thought revenue generated by the tax would exclusively go toward matching federal funds to complete transportation improvement projects.

"Frankly, the issue of investing in roads and bridges is intimately tied to the actual people that put the projects out," McKenna responded.

He said the department's financial plan sets enough money aside to match any federal grants that require it and take care of increasing operation costs.

And, he said, pay increases would help attract employees to MoDOT and avoid wasting money on turnover costs.

McKenna described the department's staffing and turnover as a "crisis."

"That's nearly 8,200 years of experience that just walked out the door," McKenna said. "That's going to take us a good decade to dig out from."

Turnover has cost the department more than $200 million since 2016, McKenna said. If the current trend continues, the department is projecting turnover costs for the year to exceed $50 million, he said.

The primary reason employees are leaving is pay, McKenna said.

"I'd say about 75 percent of that is because we are well off market for the jobs that people work for the skills that they have, for the experience that they have," McKenna said.

McKenna said the department doesn't pay a competitive rate for many of its field positions, including engineers, construction inspectors, technicians and CDL operators.

Because of staffing shortages, McKenna said, the department has also largely moved to only maintenance projects that present safety issues, such as restoring road signs that have fallen.

The department's staffing shortages have been compounded by the ongoing COVID-19 pandemic as roughly 700 employees tested positive and were isolated this month, McKenna said.

Missouri is on track for a severe winter storm this week, and McKenna said the department is worried about clearing roads in a reasonable time with its current staffing. He said the department is down more than 400 employees from its normal plow staff, which means it will take several days to get to every route.

"The level of service that people would like from MoDOT is not possible in our present staffing circumstance," he said.

He said the department should apply funds to its most immediate needs, including addressing turnover and transportation conditions around the state.

For the past couple months, MoDOT has hosted a series of public meetings to gather input on unfunded transportation needs in different parts of the state.

McKenna said the department has used that feedback to identify projects it can accomplish with the additional funding.

He said there's an opportunity for the state to make significant progress on those projects -- which the department worked with local and regional planning partners to identify -- and many involve low-volume roads.

Although major routes carry 75 percent of the miles traveled in Missouri and 90 percent are in good shape, McKenna said there's a substantial need to bring minor and low-volume roads up to the same condition.

The state has just under 17,000 miles of what the department considers minor roads, and McKenna said 80 percent are in good condition.

Issues primarily occur on low- volume roads, which make up 11,000 miles of roadway in the state and 71 percent are in good condition. McKenna said the conditions of low- volume roads are "deplorable" in some parts of the state, particularly more rural areas that primarily rely on these state roads.

"We're not satisfied with that," McKenna said. "We simply haven't had the resources. And we're very pleased with where we stand right now and moving forward to be able to make some progress there for the first time in decades."

State lawmakers have already filed at least three bills this session to repeal the gas tax, which was approved by the state Legislature last session.

The gas tax raises the price of gas by an additional 2.5 cents per gallon each year for five years. The first increment went into effect in October.

If the gas tax were to be repealed, McKenna said, it would jeopardize $3.6 billion in transportation improvements.

"We've got a program that's increasing, potentially, 50 percent," McKenna said. "We need the people to put the program out so that the contractors can do the work."