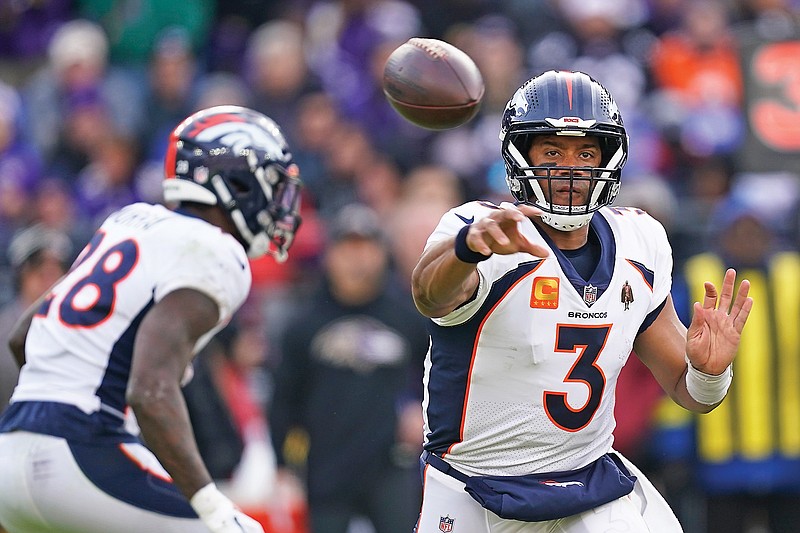 Broncos quarterback Russell Wilson passes in the first half of Sunday’s game against the Ravens in Baltimore. (Associated Press)

Some of the blame for the latest collapse Sunday goes to struggling quarterback Russell Wilson, who couldn’t drive Denver into the red zone, much less the end zone.

The Broncos (3-9) can’t score touchdowns and they can’t close out games, and these problems are intertwined.

“We have to score more points,” Denver coach Nathaniel Hackett said Monday. “We can’t put them in that position.”

Eight times this season, the Broncos have given up points in the final 5 minutes of regulation or overtime. Those letdowns are proving critical because the offense is historically bad: Denver has scored just 15 third-quarter points all season -- two of them on a safety -- and 49 in the fourth quarter.

That pales in comparison to the 102 points they’ve scored before halftime, but Hackett said that number doesn’t please him, either.

On Sunday, the Broncos throttled the Ravens all afternoon only to allow Lamar Jackson’s backup Tyler Huntley to drive the Ravens 91 yards in 16 plays for the game’s only touchdown with 28 seconds left for a 10-9 Baltimore win.

“We just weren’t able to execute there at the end,” said safety Justin Simmons, who had two second-half interceptions. “We had the two penalties, and it wasn’t good enough to win the game.”

“I think this one stings, because, obviously it’s frustrating that you play so well for most of the game and give yourself a chance to win at the end of the game,” Simmons said. “But defensively, I’m going to keep harping on you can’t play three and a-half quarters of really good football and then give it up at the end.”

It was the latest letdown for a defense that’s allowing just 17 points per game, second in the NFL only to the San Francisco 49ers (15.8).

The Broncos own the league’s worst offense. Their 13.8-points-per-game average would go down as the worst in franchise history.

With Wilson and the offense continually coming out of halftime incapable of staying on the field, the defense isn’t getting any breathers and is gassed by crunch time.

That’s no way to help out a defense that was rock solid all afternoon. But that’s how it has been all season.

In 68 drives after halftime, the Broncos have managed six touchdowns and seven field goals. Wilson has thrown three interceptions, Brandon McManus has missed four field goals, including late go-ahead attempts at Seattle and Baltimore. And the Broncos have punted 36 times, fumbled twice, turned it over on downs twice and muffed a kickoff.

The defense is paying the price for all that ineptitude.

“We needed one more stop, and we didn’t get it,” Singleton said. “We played 59 good minutes. Just got to get the stop on the last one.”

If only they weren’t always so gassed at the end.

• What’s working: Rookie TE Greg Dulcich is just about the only bright spot in Denver’s offense. He led the team with six catches for 85 yards against the Ravens. After missing the first five weeks of the season with a hamstring injury, Dulcich has caught 25 passes for 319 yards and a touchdown in seven games.

• What needs work: The Broncos’ entire special teams operation. KR Montrell Washington isn’t the spark they expected in the return game and McManus is now 6-for-24 from 55 yards or more since 2016.

• Stock up: Simmons’ two interceptions gave him two dozen for his career.

• Stock down: Washington returned the opening kickoff 11 yards to the 17 and then returned the final kickoff just 15 yards to the 18 after Baltimore had taken its first lead. The Broncos needed a much longer return to help get McManus in field-goal range. Wilson quickly drove the Broncos to the Ravens’ 45, but McManus was short on a 63-yard attempt as time expired.

• Injuries: With KJ Hamler (hamstring) having a setback last week and going on IR, the Broncos couldn’t afford another injury at wide receiver like they had when Courtland Sutton went out with a pulled hamstring.

• Up next: The Broncos host MVP favorite Patrick Mahomes and the Super Bowl favorite Kansas City Chiefs, who have beaten them 13 consecutive times since 2015. The Broncos’ latest embarrassment was getting Mahomes flexed out of the Sunday Night Football slot after Denver averaged 13 points in four prime-time games through the first six weeks of the season.