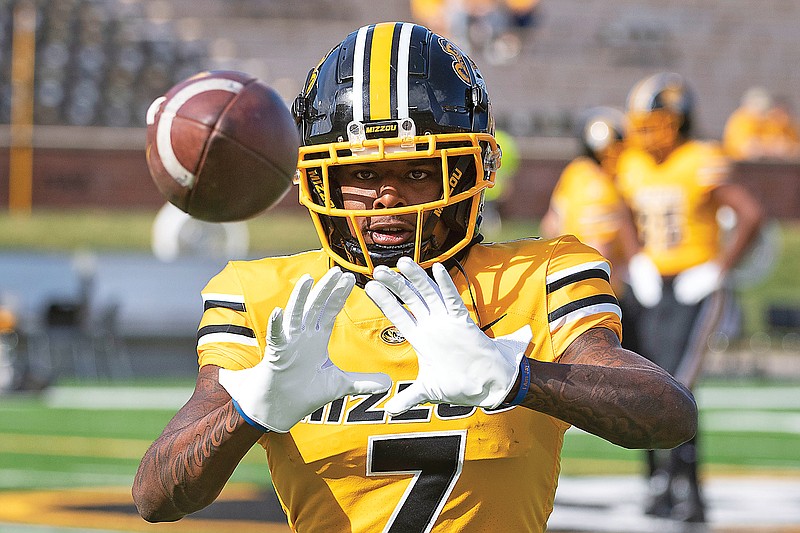 In this Oct. 22 file photo, Missouri wide receiver Dominic Lovett warms up before a game against Vanderbilt at Faurot Field in Columbia. (Associated Press)

The Missouri Tigers had four players named to the Associated Press all-Southeastern Conference team, which was announced Monday.

Lovett ranked fourth in the SEC this season with 846 yards receiving on 56 catches, scoring three touchdowns for the Tigers. He finished with four games of 100-plus yards receiving.

McGuire ranks in the top five in the SEC with 7½ sacks. He also has 39 total tackles this season, including 13 tackles for loss. He added one forced fumble and one blocked kick.

Foster blocked for an offense that averaged 25.5 points and 370.8 yards per game. Missouri averaged 212.8 yards passing and 158.1 yards rushing.

Hopper led the Tiger defense with 14 tackles for loss and was second on the team with 69 total tackles, including 53 solo stops. He also had one forced fumble and one interception.

Tennessee coach Josh Heupel was picked as coach of the year after keeping his team in playoff contention for much of the season. The sixth-ranked Volunteers are 10-2 and face No. 10 Clemson in the Orange Bowl.

Hooker was picked as first-team quarterback and offensive player of the year on all but one ballot, with that nod going to Alabama’s Bryce Young in both cases. He suffered a season-ending left knee injury in a loss to South Carolina, finishing with 3,135 yards passing and 27 touchdown passes against just two interceptions.

Anderson was the unanimous pick as defensive player of the year. He has 51 tackles, 10 sacks and 17 tackles for loss along with a pick-6.

The voting was conducted among a panel of 15 sportswriters and broadcasters covering the league.