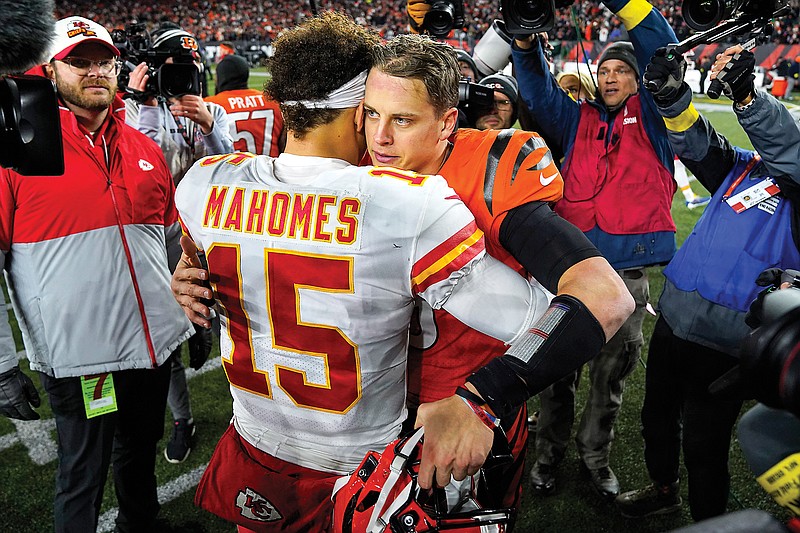 KANSAS CITY -- With a rare fumble by Travis Kelce, a missed field-goal try by Harrison Butker and a woeful inability to pressure the quarterback Sunday, the Kansas City Chiefs squandered a chance to control the AFC playoff race down the stretch.

After losing their third straight game to the Bengals, blowing a fourth-quarter lead in a 27-24 defeat in Cincinnati, the Chiefs tumbled out of the top playoff position in the conference.

They are now 9-3 and tied atop the AFC standings with Buffalo, which handed the Chiefs one of their losses and thus holds the tiebreaker with five games left to play.

Making things even more worrisome: The Bengals hold the tiebreaker against Kansas City, too. And they’re tied with the Ravens and Dolphins at 8-4, just a game behind the Bills and Chiefs in what is suddenly a tight playoff race.

“They’ve beaten us three times in a row,” Chiefs running back Jerick McKinnon said, “so they obviously have our number right now. Looking at it and what we’re going through, a lot of times it comes down to just doing what it takes -- a minor mistake here and there, and it will come back to cost you.”

Such as when Kelce fumbled trying to gain unnecessary extra yardage while the Chiefs were clinging to a 24-20 lead early in the fourth quarter.

Or when Butker missed a 55-yard field goal well within his range with 3:24 to go that would have tied the game. Or any of the times the Chiefs failed to get to Joe Burrow, who was barely pressured, much less sacked.

It was all an eerily similar script to the previous two meetings with the Bengals, when the Chiefs blew leads in a regular-season loss in Cincinnati in January and an overtime loss four weeks later in the AFC title game.

“They just have a well-put together team,” Chiefs quarterback Patrick Mahomes said. “You saw the offense, even though it has the playmakers, they’ll take their time and kind of utilize the clock. Their defense changes up a lot of different coverages. They did a good job trying to take Travis away as much as possible and that’s why you saw a lot of the other guys making catches. I feel like we executed at a high level … (but) it wasn’t high enough because we didn’t win.”

In fact, the Chiefs have had a difficult time defeating both of their biggest rivals for AFC supremacy.

Along with three straight losses to the Bengals, the Chiefs have lost two of their past three against the Bills, including the 24-20 setback at Arrowhead Stadium earlier this season that is suddenly looming large in the playoff picture.

“It was a rematch of the AFC Championship Game and it lived up to it,” Chiefs safety Justin Reid said. “It isn’t a good feeling right now, but the good news is we have a lot of football left to play in December, and I’m sure we’re going to see those guys again come January.”

• What’s working: The run game has given the Kansas City offense some balance, and a good argument can be made that the Chiefs didn’t utilize it enough Sunday. McKinnon carried eight times for 51 yards with a TD catch and Isiah Pacheco had 14 carries for 66 yards and a scoring run. All told, the Chiefs ran for 138 yards at 5.5 yards per carry; Mahomes was held to 223 yards passing on 27 attempts.

• What needs help: The Chiefs have turned the ball over at least once in seven straight games, the longest streak during Andy Reid’s tenure. That includes two in the loss to Buffalo at the front end of the streak and one to Cincinnati on Sunday.

• Stock up: McKinnon might be the only player on the Kansas City sideline that could feel good about his play Sunday. He’s been used primarily as a receiver out of the backfield, but he proved against the Bengals that he can run the ball, too.

• Stock down: The Chiefs defense took a big step back. It didn’t matter whether they used three-man fronts, blitzes or some combination, they failed to put any pressure on Burrow, who was 25-of-31 for 286 yards and two scores.

• Injuries: Mahomes was hobbling around on a sore foot late in the game but said he was fine.

• Key number: 1 -- The Chiefs sacked Burrow once, and it was late in the game and rather meaningless. They had no other quarterback hits and only two other tackles for loss in the game.

• Next steps: The Chiefs have a soft finishing stretch, but it continues with two more on the road. First up is Denver on Sunday.