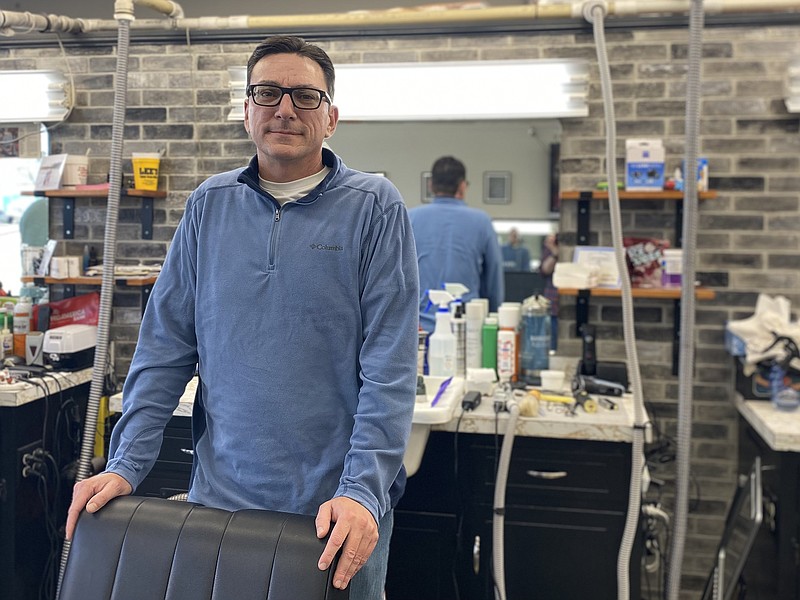 Matthew Ross, co-owner of Southside Barber Shop in Jefferson City, had plenty of experience in the barbering profession before he even stepped behind the chair at the historic shop.

His experience in the profession includes nearly a decade barbering in the Jefferson City area and a 24-year-long career that's taken him around the state. He said he was inspired to take up the clippers by his uncle, who was a barber for many years.

A Jefferson City native, Ross headed to Springfield to attend the Academy of Hair Design in the 1990s after working a few other odd jobs. After graduating, he worked at his uncle's shop in Licking, then moved on to another shop in Rolla. He finally returned to the Jefferson City area nine years ago, and eventually became co-owner of Southside with fellow barber Chris Carwile.

"My uncle inspired me to get into the barbering business," Ross said. "He had a shop when I was growing up and did well for himself, so I figured I would give it a shot myself. I worked from place to place and finally ended up back here a while ago."

The historic spot has been a barbershop since 1908, he said, and retains a great relationship with the community and regulars.

The business, which borders Old Munichburg at 114 E. Dunklin St., retains the charm of an old-school barbershop, even featuring an iconic blue and red striped pole spinning outside on the corner. Ross said the small shop participates with the community, including working with school sports teams on advertising. He said the clientele was varied and interesting, with folks from all walks of life coming in for a haircut and a chat.

The shop has carried on through world wars and drastic economic ups and downs. Ross said it had proven resilient through it all, including more recent world events.

The business has remained steady throughout his tenure behind the chair at Southside, he said, even with the pandemic shuttering shops across the country in spring 2020. Ross said the business had rebounded from a few weeks of closed doors, with lines cropping up outside on their first day back open and a healthy stream of customers ever since.

"The only thing was we had to close down for a couple of weeks at the beginning," he said. "Other than that, we didn't really have any issues."

Ross said many of his customers talk about sports while they're in his chair. This time of year, there's plenty to be discussed, whether it's the Kansas City Chiefs, the Mizzou Tigers basketball team's recent hot streak or the ongoing FIFA World Cup.

"You hear a little gossip, but we mostly talk about sports," he said. "People get passionate about it sometimes, but I don't follow soccer all that closely myself."

Gov. Mike Parson recently announced Ross had been appointed to the Missouri Board of Cosmetology and Barber Examiners, a role where he said he would put his decades of experience to good use for the state.

The board, which is housed under the Missouri Department of Commerce and Insurance, is tasked with licensing and registering cosmetologists, hairdressers and manicurists within the state. It also considers claims of negligence, misconduct, incompetence and fraud, and puts legislation and regulations into practice. He said he's already had the first meeting of his two-year term since his appointment was announced in early November.

The role was something Ross said he had been interested in for a while, and after thinking about the opportunity he took the jump and scored the appointment.

"Knowledge and experience don't hurt in that role," Ross said. "It's something that sort of kiddingly came up one day, and I thought it would be interesting. It's not unlike being a referee in sports, where you want young blood and fresh eyes in the role sometimes to make sure everything's running correctly."

Both roles will keep him busy, but regulars should still expect to find him ready and waiting when they make their way into the shop.

"We're very fortunate guys to be here and to have the customers that we do coming in for a regular haircut," Ross said. "I really enjoy what I do. I feel very fortunate, and I'm excited to take on the new role with the board."