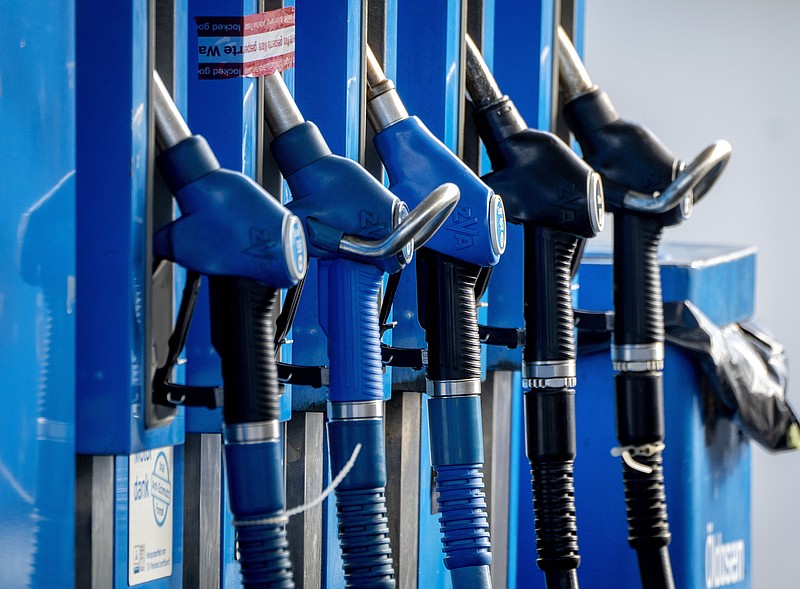 Taps are photographed at a gas station in Frankfurt, Germany, on Oct. 5, 2022. The Saudi-led OPEC oil cartel and allied producing countries, including Russia, are scheduled to decide how much oil to supply to the global economy amid weakening demand in China and uncertainty about the impact of new Western sanctions against Russia that could take significant amounts of oil off the market. (AP Photo/Michael Probst, File)

FRANKFURT, Germany (AP) -- The Saudi-led OPEC oil cartel and allied producers including Russia did not change their targets for shipping oil to the global economy amid uncertainty about the impact of new Western sanctions against Russia that could take significant amounts of oil off the market.

The decision at a meeting of oil ministers Sunday comes a day ahead of the planned start of two measures aimed at hitting Russia's oil earnings in response to its invasion of Ukraine. Those are: a European Union boycott of most Russian oil and a price cap of $60 per barrel on Russian exports imposed by the EU and the Group of Seven democracies.

It is not yet clear how much Russian oil the two sanctions measures could take off the global market, which would tighten supply and drive up prices. The world's No. 2 oil producer has been able to reroute much, but not all, of its former Europe shipments to customers in India, China and Turkey.

The impact of the price cap is also up in the air because Russia has said it could simply halt deliveries to countries that observe the limit. But analysts say the country would likely also find ways to evade the cap for some shipments.

On the other side, oil has been trading at lower prices on fears that coronavirus outbreaks and China's strict zero-COVID restrictions would reduce demand for fuel in one of the world's major economies. Concerns about recessions in the U.S. and Europe also raise the prospect of lower demand for gasoline and other fuel made from crude.

That uncertainty is the reason the OPEC+ alliance gave in October for a slashing production by 2 million barrels per day starting in November, a cut that remains in effect. Analysts say that took less than the full amount off the market because OPEC+ members already can't meet their full production quotas.

An OPEC+ statement Sunday pushed back against criticism of that October decision in view of the recent weakness in oil prices, saying the cut had been "recognized in retrospect by the market participants to have been the necessary and the right course of action towards stabilizing global oil markets."

The White House, which has pressed for more oil supply to keep gasoline costs down for U.S. drivers, at the time called the cut "shortsighted" and said the alliance was "aligning with Russia."

With the global economy slowing, oil prices have been falling since summertime highs, with international benchmark Brent closing Friday at $85.42 per barrel, down from $98 a month ago. That has eased gasoline prices for drivers around the world.

Average gas prices have fallen for U.S. drivers in recent days to $3.41 per gallon, according to motoring club federation AAA.

While U.S., European and other allies seek to punish Russia for the war in Ukraine, they also want to prevent a sudden loss of Russian crude that could send oil and gasoline prices back up.

That is why the G-7 price cap allows shipping and insurance companies to transport Russian oil to non-Western nations at or below that threshold. Most of the globe's tanker fleet is covered by insurers in the G-7 or EU.

Russia would likely try to evade the cap by organizing its own insurance and using the world's shadowy fleet of off-the-books tankers, as Iran and Venezuela have done, but that would be costly and cumbersome, analysts say.

The cap of $60 a barrel is near the current price of Russian oil, meaning Moscow could continue to sell while rejecting the cap in principle. Oil use also declines in the winter, in part because fewer people are driving.