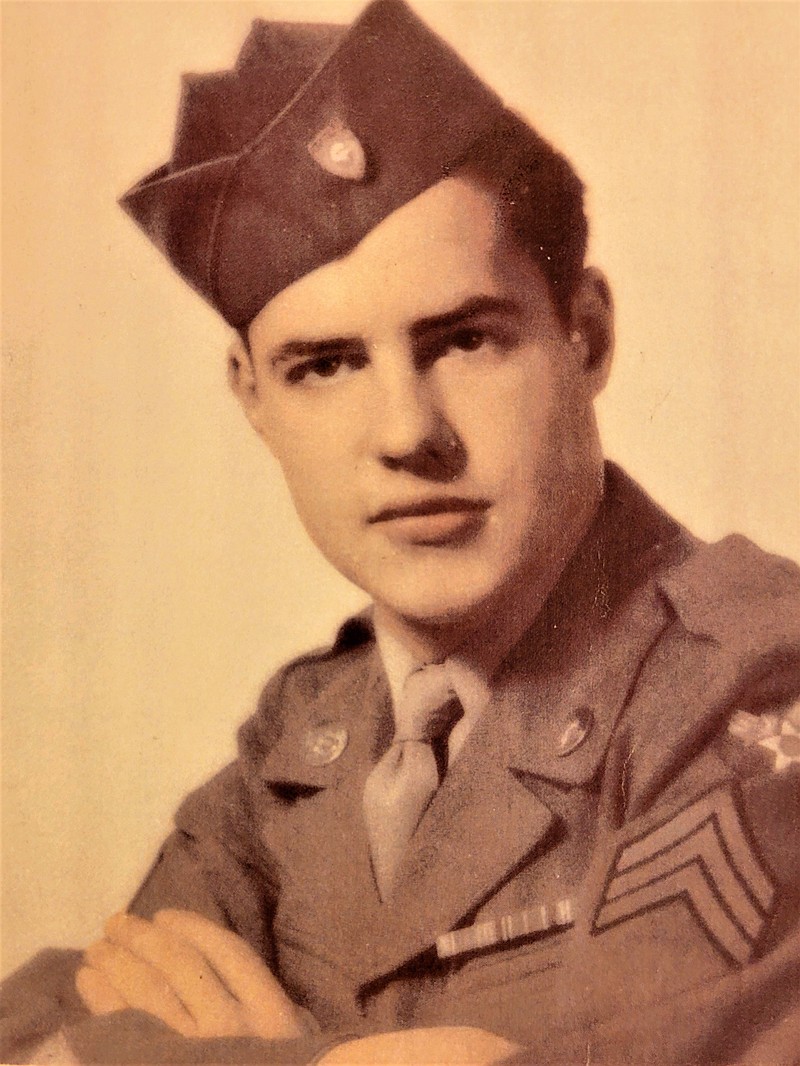 Upon his arrival in France in the fall of 1945, Gus Heisler was appointed as a guard in a motor pool at a tent city known as Camp Lucky Strike. (Courtesy/Gus Heisler)

With World War II in full swing while he was in high school at Meta, Gus Heisler completed correspondence courses during the summer months, realizing he might be drafted into the military. His foresight paid off, as he was able to graduate after his junior year in the spring of 1945 and received his induction notice shortly thereafter.

"I entered the service on June 14, 1945, at Jefferson Barracks and fully expected to join the Navy and be sent to the Pacific to fight," Heisler recalled. "That's where we got our clothing issued, physicals and all of our shots, but I was told I was being sent to the Air Corps and transferred to Sheppard Field near Wichita Falls, Texas."

Throughout the next several weeks, he underwent his initial military training and moved to Scott Field, Illinois. He and his fellow trainees spent the next couple of months attending teletype school, learning Morse code and to type on tape.

"I had learned to type in high school, which is probably why I was sent to the school," he said. "On the weekends, I was allowed to take the bus or the train back to visit my family in Meta."

In the weeks following the surrender of Japan and the end of World War II, Heisler was sent to Monroe, Louisiana, and received additional inoculations in preparation for deployment. In October 1945, he boarded the USS America and began the eight-day overseas journey.

Arriving at Le Havre, France, his group soon moved to a location 45 miles away known as Camp Lucky Strike.

"We arrived at the camp -- a big tent city -- sometime around midnight," Heisler recalled. "The first thing they did was give me guard duty, carrying a gun with no ammunition, in a large motor pool."

He continued, "I remember that there was a big prisoner of war compound nearby and they were not really confined, so they were able to cross the motor pool whenever they needed to get to their latrines."

Several days later, Heisler joined a group of soldiers moved to a French Air Field near Paris under the control of the U.S. Army Air Forces. As a member of a Troop Carrier Squadron, Heisler operated teletype machines at the airfield and was promoted to corporal.

"The teletypes were large machines with keyboards that sat on the floor and received messages on tape," he recalled. "My job was decoding the dots on the tapes that stored the incoming messages."

Six months into this assignment, Heisler was transferred to Orly Air Base in Paris, an international landing field. A memorable moment that occurred while he was stationed at the base was seeing the Enola Gay, the historic B-29 Superfortress that had dropped the atomic bomb "Little Boy" on Hiroshima.

"During the time we were at Orly, we lived in Quonset huts located next to the runway," Heisler said. "I worked in an office but was no longer doing teletype work; instead, I functioned like a secretary ... typing letters and assigning radio operators. Here I was promoted to sergeant."

Since the war was over and they were considered to be in a safe location, Heisler and many of his fellow America service members were given standing passes to visit Paris. The country boy from small town Missouri embraced the opportunity of a lifetime and visited historic sites such as the Eiffel Tower and the Arc de Triomphe in addition to trips to countries like Switzerland.

He recalled, "My time overseas came to an end in November 1946, and I was sent to Bremerhaven, Germany, to board a small troop ship, the USS General Taylor, and come back to the states. It was smooth sailing until we hit the Atlantic Ocean and everyone got seasick on the 12-day journey home."

Upon his arrival in New York, Heisler received a three-day pass and visited the Empire State Building. From there, he was sent by troop train to Fort Sheridan, Illinois, and received his separation from the military in December 1946.

"They left us one set of uniforms to wear back home," he said. "Then I took a train from Chicago to St. Louis and finally on to Jefferson City, where my dad picked me up and brought me home to Meta."

With a chuckle, he added, "I remember that before we left Chicago, several of us stopped at a bar but couldn't get a beer because we weren't old enough."

In 1948, Heisler married his fiancée, Alice Radmacher, who he had met at dances and other social events while they were both still in high school. The couple went on to raise three daughters and a son.

After the war, Heisler was hired by Western Light and Telephone, and the company was purchased by Missouri Power and Light in the mid-1950s. He remained employed with the company, which is now known as Ameren Missouri, for more than 41 years, retiring as an auditor.

His beloved wife died in 2016, but he finds comfort witnessing the accomplishments of his 10 grandchildren and 19 great-grandchildren. One of his greatest honors was giving the first salute to his great-grandson upon his commissioning as an officer in the U.S. Army.

Heisler recognizes he was not among the scores of his fellow Americans who fought on the front lines during World War II, but performed the duties he was given without qualm or regret.

"I never had the experience of being shot at by the enemy and fortunately, I was placed in locations where I was safe," he said.

"But those of my generation were willing to give of ourselves regardless of the dangers that were present," he said. "We had a country to save and because of those who put on the military uniform, we have the best freedoms that are available in the world." 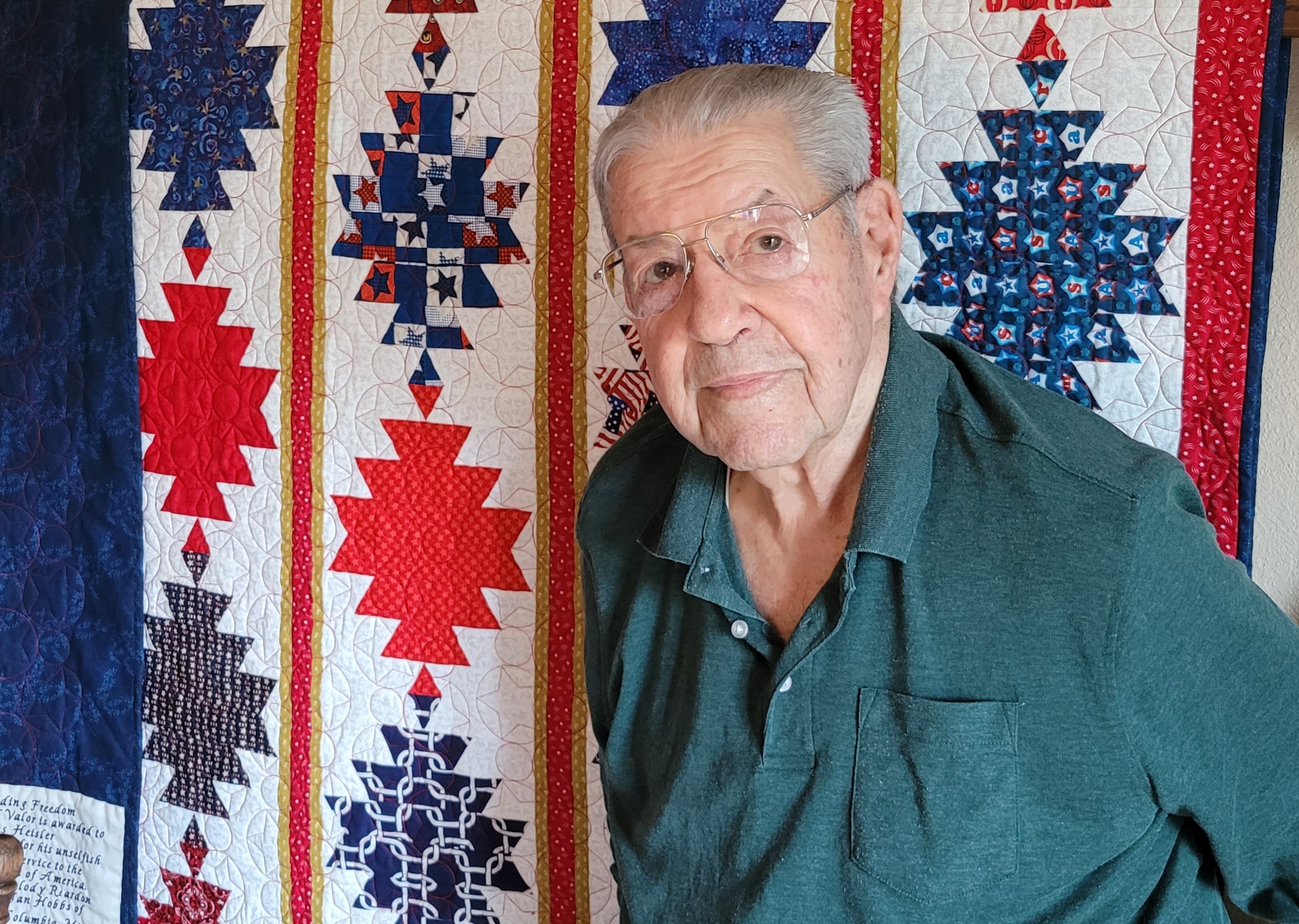 Gus Heisler, a World War II veteran, is pictured next to a quilt of valor he received in honor of his military service. Inducted into the Army Air Forces in the summer of 1945, Heisler served as a teletype operator in France after the end of the war. (Courtesy/Jeremy Amick)