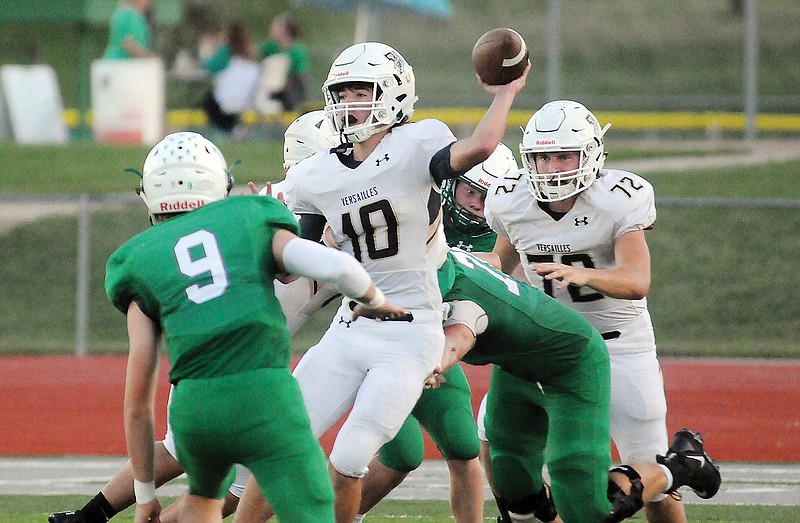 In this Sept. 14, 2018, file photo, Versailles quarterback Coby Williams throws a pass during a game against Blair Oaks at the Falcon Athletic Complex in Wardsville. (News Tribune file photo)

A minor shakeup is coming soon to the Tri-County Conference.

“This is something that’s going to benefit our kids,” Versailles activities director Kyle Middleton said.

Versailles will join Buffalo, Butler, El Dorado Springs, Sherwood and Warsaw in the Ozark Highlands. Middleton said Clinton has also been offered an invitation to join the conference.

“The superintendents would like for us to stay in the conference until the end of the next school year, unless all of the (athletic directors) can get schedules figured out, that it wouldn’t put everybody in a bind and they would be fine with us leaving this summer,” Middleton said. “That’s what we’ve been tasked with here lately.”

This is not the first time Versailles has contemplated joining the Ozark Highlands.

When Warsaw announced its decision in October 2016, Versailles was also approached about becoming one of the founding members of the new conference.

“But at that time, I’ll be honest, it was rushed, it wasn’t well thought through, our community did not respond well to it,” Middleton said. “I think most of our coaches were on board with it, but a lot of our administration was not. That’s essentially why, back in 2016, it got voted down.”

Middleton said the main reason it was voted down was due to long travel to the other Ozark Highlands schools. Warsaw is about a 50-minute drive from Versailles, but drives to Sherwood and Buffalo are a little less than 90 minutes and El Dorado Springs and Butler are each about 1 hour and 45 minutes from Versailles.

“They thought it was too far to go to some of those places, like El Dorado Springs and Butler,” Middleton said.

But Middleton was quick to point out Versailles also travels long distances to play non-conference opponents.

“So that following year, I started scheduling schools like Buffalo, Sherwood, Clinton,” he said. “I wanted people to see, ‘Hey, we’re going to play them anyway, it’s going to be OK if we eventually join their conference.’

“We’ve been doing this since 2016, and I’ll be 100 percent honest, no one has ever said a word to me about traveling to Buffalo on a Tuesday night for boys basketball and getting back late.”

Middleton said Warsaw’s superintendent and athletic director reached out to Versailles in August to see if the Tigers would consider leaving the Tri-County to join the Ozark Highlands.

This time, the community was more open to the idea of leaving the Tri-County.

“I’m not going to say it’s 100 percent on board, because we definitely still have those very true Tri-County people that were here when it was founded, have coached in it and played in it and they don’t ever want to see us leave it,” Middleton said. “But it was a lot more positive talk this year than it has ever been.”

“Now we need to figure out when we’ll actually break ties with the Tri-County,” Middleton said.

For now, Versailles’ move to the Ozark Highlands is scheduled for the start of the 2024-25 school year. However, there is a possibility it could come as early as next school year, but a lot of items would need to be addressed soon in order for that to happen.

The Tri-County superintendents will meet this week and the athletic directors will meet Dec. 13 to discuss the conference’s future.

“I think a lot more will be decided here in the next month or so about what our timeline will actually be like,” Middleton said.

One of the scheduling changes for Versailles is it will move from fall softball to spring softball when it joins the Ozark Highlands. Only Sherwood plays fall softball among the conference schools.

“We’ve been wanting to go to the spring anyway,” Middleton said. “We share so many girls that play softball and volleyball when they’re younger, and even in middle school. By the time they get to high school, they have to choose one or the other. It just splits our programs and we’re not as successful as we want to be.”

Middleton expects Versailles to form a rivalry against Warsaw in the Ozark Highlands.

“We play Warsaw in almost every single sport we have,” Middleton said.

But the Tigers hope to keep rivalries going against other Tri-County schools in non-conference matchups.

“No matter what, I would still like to play Eldon and Osage and California in every single sport,” Middleton said. “A lot of our coaches still want to have those games with those schools.”

Moving to the Ozark Highlands will allow Versailles to be more competitive in all sports, Middleton said, but he added that’s not the only reason the school is changing conferences.

“It’s just nice to be able to go in with schools that are our size and share our demographics,” he said.

But the competitive factor did play a role. For example, a move to the Ozark Highlands will give the Tigers more non-conference games on their schedule.

“Basketball, baseball, softball, volleyball, there are so many more non-conference games that we can schedule, whether it needs to be a Class 2 school, or if we’re really good, we can schedule Class 4 and 5 schools,” Middleton said.

Middleton believes Versailles’ announcement to join the Ozark Highlands could be the first domino to fall in regard to conference realignment in Mid-Missouri.