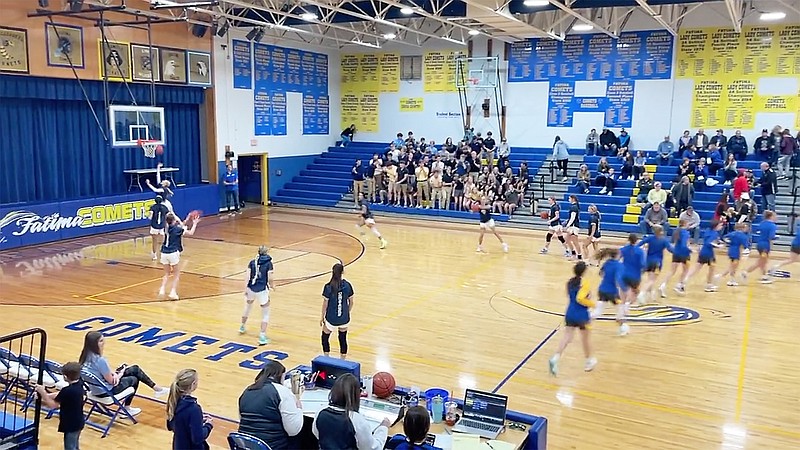 The Helias and Fatima girls basketball teams warm up Saturday prior to the start of the Comet Classic championship game in Westphalia. (Kyle McAreavy/News Tribune)

Top-seeded Helias rebounded from a seven-minute stretch without a field goal with an 11-3 run late in the fourth quarter to come back for a 57-53 win against the third-seeded Fatima Lady Comets in the championship of the Comet Classic.

“Almost every time we play them, it’s close like that,” Helias coach Garrett Wiggans said. “Back and forth. They’re very well coached, Matt Baker does a great job. The zone that they play, they get after it and it’s hard to score off it.”

The win makes Helias back-to-back champions in the Comet Classic after beating Fatima 58-55 in last year’s title game. The teams have matched up six times in the past three years with Helias winning all six. Fatima last beat the Lady Crusaders on Dec. 11, 2014.

“We keep running into them,” Fatima coach Matt Baker said. “We’ve told the girls, it’s a growing moment for all of them. I think our kids played tough, but there were moments where tough wasn’t good enough. And if you want to make runs like (Helias) did last year to the Final Four, it’s that little bit where you think you did enough and you still need to do a little bit more.”

The Lady Crusaders came out of halftime with a 33-28 lead, but neither team had much offensive success early in the second half.

Helias scored the first points of the third quarter when Alaina Meyer dished an assist to Ava Morris on an inbounds pass with 4:50 left. After two Kristen Robertson free throws for Fatima, Kenadi Harrison hit the Lady Crusaders final shot for the next 7:09 when she connected on a right-corner 3 off a Mikah Edwards assist to put Helias up 38-30 with 3:57 left in the third.

Edwards had just come back in from a quick timeout with a nosebleed caused by a previous play, but had to exit again, leaving the Lady Crusaders without the Comet Classic MVP for a couple of minutes.

Edwards returned for Helias, but her third foul led to a Brune free throw to give the Lady Comets a 39-38 lead at the end of the third quarter.

An Edwards free throw and a Morris free throw were Helias’ only points in the first three minutes of the fourth quarter as Fatima built a 44-40 lead with 5 minutes to go, then the lid came off the basket for the Lady Crusaders.

After an 0-for-14 stretch shooting, Helias connected on 6-of-9 attempts the rest of the way.

Edwards dished an assist to Harrison for a right-wing 3 to cut the Fatima lead to one with 4:48 left, then Morris assisted Edwards for a right-wing 3, three of her game-high 20 points, to give Helias the lead at 46-44 with 3:58 to play.

“I’ve had all these girls for at least three years now, they know we’re never out of it,” Wiggans said. “No matter if we’re struggling. At the end of the day, I’ve got to do a better job of getting our team prepared so we don’t get in those lulls.”

Fatima retook the lead on the next play when Vivian Bax drove the lane and spun in the post for a layup through contact, adding the and-1 free throw for a 47-46 advantage, but Helias’ Morris then brought down an offensive rebound, one of her game-high 13 boards and four offensive boards in the fourth quarter alone, and turned it into a traditional three-point play of her own to give the Lady Crusaders the lead they would not give up with 3:17 left.

Claire Galbraith drove for a layup, then Edwards turned a steal into a layup to put Helias up 54-48 with 1:12 left.

The teams traded points down the stretch to create the final margin.

“That was our first test that we’ve had this year,” Wiggans said. “I know it’s a young season, but we’ve been playing mostly five girls the whole game. They got tired and you could tell. With that kind of atmosphere and the kind of pressure Fatima brings, it’s hard to simulate that in practice.”

Alli Robertson scored 19 points for the Lady Comets and neared a double-double with nine rebounds to complement four assists, while Brune had 14 points and six rebounds.

Helias shot the lights out early to build an 18-14 lead after the first quarter, connecting on 6-of-13 shots overall, then Edwards led the Lady Crusaders with her first 12 points, all coming in the second quarter to power Helias to a 33-28 halftime lead.

“We missed a pile of free throws down the stretch, but there was a lot of time left,” Baker said. “… That’s the game. We had some untimely turnovers with our sophomores out there, but turnovers with the way they pressure are going to happen. That game was lost at the free throw line.”

Helias (4-0) doesn’t get much of a break. It will play in the Sophie Cunningham Classic against John Burroughs at 2 p.m. today at Columbia College.