From the Stacks: New romantic comedy both savory and sweet 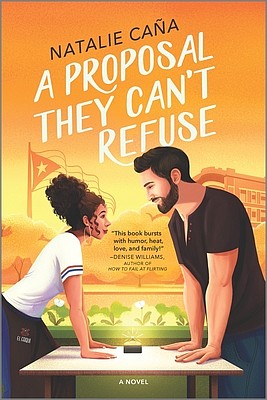 I'm not usually impressed by a debut author. Often, the plot or the characters come off as clumsy, the dialogue isn't great, or the similes are nonsensical. But new author Natalie Caña came out strong with a romantic comedy, "A Proposal They Can't Refuse," that was delicious and dreamy.

Kamilah Vega and Liam Kane have been at odds for years. Though they were best friends as children and had an (attempted) fling in high school, they are diametrically opposed and seemingly incompatible in every way. Kamilah is a passionate Puerto Rican would-be chef with dreams of saving her family's restaurant from the gentrification of her neighborhood. Liam is a cool, Irish, taciturn whiskey distiller with his eyes on first place in a national whiskey competition. Both are on their way to fulfilling their years-long dreams when their octogenarian grandfathers throw down an ultimatum: Kamilah and Liam must marry each other, or Abuelo and Granda will sell the building that houses their respective businesses.

What follows is a hilarious and heart-wrenching journey for Kamilah and Liam. Driven and determined to make their dreams reality, the two decide to try to outwit their grandfathers by faking an engagement. But between interfering family members, delicious homemade mallorcas, and confusing, heated touches, the pair find themselves wondering how fake their engagement actually is.

As a self-proclaimed foodie, I was immediately drawn to this book and did not regret a minute of my time reading it. Caña's description of Kamilah's cooking and Liam's whiskey had me drooling, while the romance between them was not only believable, but truly stirring. Both Kamilah and Liam are flawed characters but they learn and grow, not only as a couple, but as individuals. The combination made "A Proposal They Can't Refuse" both savory and sweet, and a delight from start to finish.

Megan Mehmert is the technology training librarian at the Missouri River Regional Library.

Print Headline: From the Stacks: New romantic comedy both savory and sweet