Bourbon legends: These Kentucky inns offer a taste of history along with the famous drink 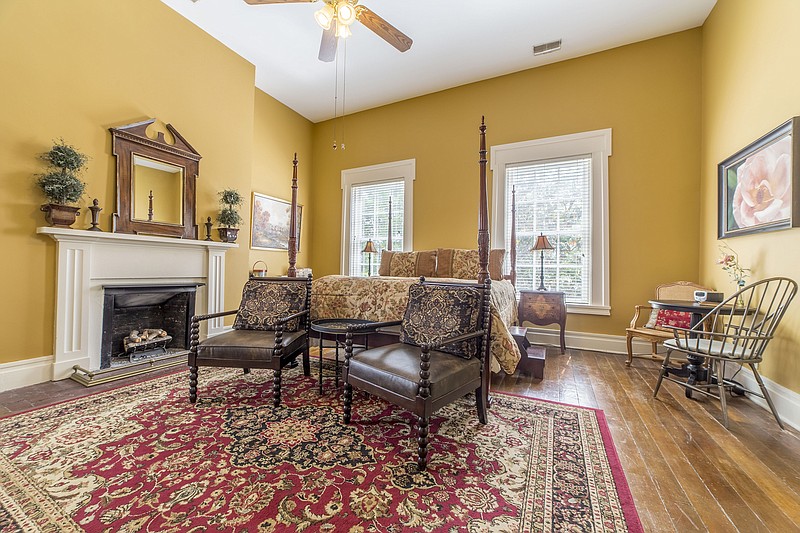 Bourbon lovers never seem to get enough of Kentucky's signature beverage. Not only do they want to drink it, but also eat and now, sleep it. First, it was restaurants that made bourbon an essential part of cooking, and now it appears that bourbon also makes for a good night's sleep.

If you're planning a trip on the Kentucky Bourbon Trail, at these seven places bourbon is as essential as high-thread-count sheets.

The bar at this six-room historic inn on Bardstown's Courthouse Square claims the granddaddy of all bourbon bars. The rustic tavern has been satisfying thirsty customers since 1779, the year the inn opened as the oldest stagecoach stop west of the Allegheny Mountains. Yep, that makes this the oldest bourbon bar in the world.

Their inventory includes more than 300 bourbons, but many visitors opt for the bar's signature cocktail, the Sidecar Named Desire. This concoction made up of Woodford Reserve Bourbon, house-made strawberry simple syrup, lemon juice, apple cider and Cointreau and garnished with raw sugar around the rim of a martini glass won Cocktail of the Year at the 2014 Kentucky Bourbon Festival.

By all means, indulge, but don't overindulge as did one of the bar's most famous customers.

Outlaw Jesse James was a bourbon lover, and following a night of heavy drinking, he stumbled upstairs to his room. Seeing painted birds on a wall mural, he mistook them for real birds and got off a round of shots before realizing his error. The bullet holes still remain in the wall.

Who knows more about bourbon than the Samuels family? Visitors to Maker's Mark Distillery in Loretto learn their contribution to the industry, but guests who check into The Samuels House get a more up-close and personal bourbon experience.

The Federal-style house dates to 1820 when it was built by John Samuels whose father, Robert, made whiskey for George Washington's troops during the Revolutionary War.

The house was the site of the surrender of the last armed guerrilla group following the Civil War. That group, which included future outlaw Frank James, surrendered to Sheriff T. W. Samuels -- yes, a family member.

For history of a different kind, the house contains the Samuels family's personal memorabilia, including the deep fryer used by Margie Samuels to perfect the signature red wax seals on Maker's Mark bottles.

Today, the Samuels House operates as a three-bedroom Bed & Breakfast for the true bourbon aficionado. Rooms are luxurious with two of them having fireplaces and vintage wardrobes. There's a stocked chef's kitchen, dining room with a 200-year-old original mural, a stone patio with a fire pit, and a parlor with a custom crafted bar displaying more than 50 bottles of whiskey produced by the Samuels family (sorry, these are for looking at, not drinking).

However, drinking is encouraged during a private talk and sipping with Bill Samuels Jr. or a bourbon dinner with the Samuels House's private chef (both add-ons to the price of a stay).

This is the ultimate insider's bourbon experience coupled with a good night's sleep.

Spend the night in a five-bedroom mansion on a farm owned by Brown-Forman (whose portfolio includes Woodford Reserve Bourbon), heiress Laura Lee Brown and her husband, Steve Wilson.

Guests must rent out the entire house, and they have a choice of several bourbon-related activities as add-ons: a build-your-own Old Fashioned class with one of the farm's bourbon stewards, a single barrel pick upon arrival,or, if you time your visit right, one of the quarterly distillers' dinners.

One thing guests can enjoy any time is a meal at Barn 8 Restaurant, a unique experience combining the commonwealth's two signature industries -- bourbon and horses.

Book dinner Wednesday through Saturday or Sunday brunch, and reserve one of the three stalls once occupied by a famous Thoroughbred.

Enjoy a house old-fashioned or Cowgirl Coffee (Rittenhouse rye, spiced coconut cream and walnut syrup) with your meal, and then have a nightcap in the cozy bar that Wilson has stocked with 160 bourbons and 32 ryes.

Afterward, retreat to your accommodations surrounded by stately pin oaks and lush green farmland, and decorated with a mix of antique furnishings and contemporary art from the 21c Museum Hotel collections (Brown and Wilson also own the upscale contemporary hotels).

This inn offers "comfort with a splash of bourbon." For starters, your accommodation will be in one of four suites: Reserve, Single Barrel, Angel's Share and Stillhouse. How can you have anything but pleasant dreams?

Missy Hillock, who owns the Chateau Bourbon with her husband, John, is an executive bourbon steward and is happy to give her guests a bourbon tutorial in everything from the distilling process to sharing cocktail recipes.

She's also happy to have them drink their bourbon and eat it too at the evening "Sip and Sweets" Happy Hour. Bourbon cocktails using fresh herbs, fruit or house-made syrups are paired with delectable treats such as bourbon toffee truffles in Ghirardelli chocolate.

Only in the "Bourbon Capital of the World" would you find as bourbon-centric a property as Bourbon Manor. Innkeepers Tyler Horton and Todd Allen believe that when they opened it in 2013, it was the first bourbon-themed bed and breakfast in the country.

Fashioned from two pre-Civil War plantation homes -- an 1810 Federal-style and an 1820 Greek Revival Antebellum mansion -- it was occupied by both Confederate Gen. Braxton Bragg and Union troops en route to the Battle of Perryville 33 miles away.

In neither of the above was there time for bourbon drinking, but that's not the case for today's visitors, with the emphasis all on bourbon.

The 10 spirit-themed guest rooms are named after cocktails featured nightly in the bourbon bar. So, whether you prefer a mint julep, Manhattan or Scarlet Starlet -- either the room or the drink -- it's yours).

The bar is currently set up inside the lobby of the main house, but in spring of 2023, the owners plan to reopen the Bunghole Bar, which was destroyed by a fire, in its original location in the barn.

In addition to a gourmet breakfast, the inn also offers three bourbon tours (self-driving, local excursion shuttle or private transportation and driver) which include two distilleries, Oscar Getz Museum of Whiskey History, a box of Rebecca Ruth bourbon balls and two cocktails in the Manor's bar.

This peaceful inn in its park-like setting is a slight anomaly among bourbon-themed inns. It doesn't have a liquor license, so you won't be able to belly up to the bar for your nightly bourbon.

You can, however, bring your own favorite bourbon and make use of the inn's wet bar with all the necessary utensils for creating a cocktail to enjoy in the living room, on the terrace or in the privacy of your room.

Don't worry, you will get your bourbon intake in the bountiful breakfast where dishes such as bourbon hoecakes, Woodford Pudding and Race Day Pie are on the menu.

One might not think of this historic property as being bourbon-themed, but it certainly is bourbon-centric. A visitor can drink bourbon to his or her heart's content.

The Jockey Silks' list of 150 bourbons is exceeded by the newly reopened Down One Bourbon Bar with its inventory of 200 bourbons.

This sophisticated New York-style eatery has a subterranean speakeasy feel and elevated American pub grub, which pairs well with one of the hand-crafted cocktails. To honor the Derby, have a Mint Julep or, if you prefer the fillies, an Oaks Lily. 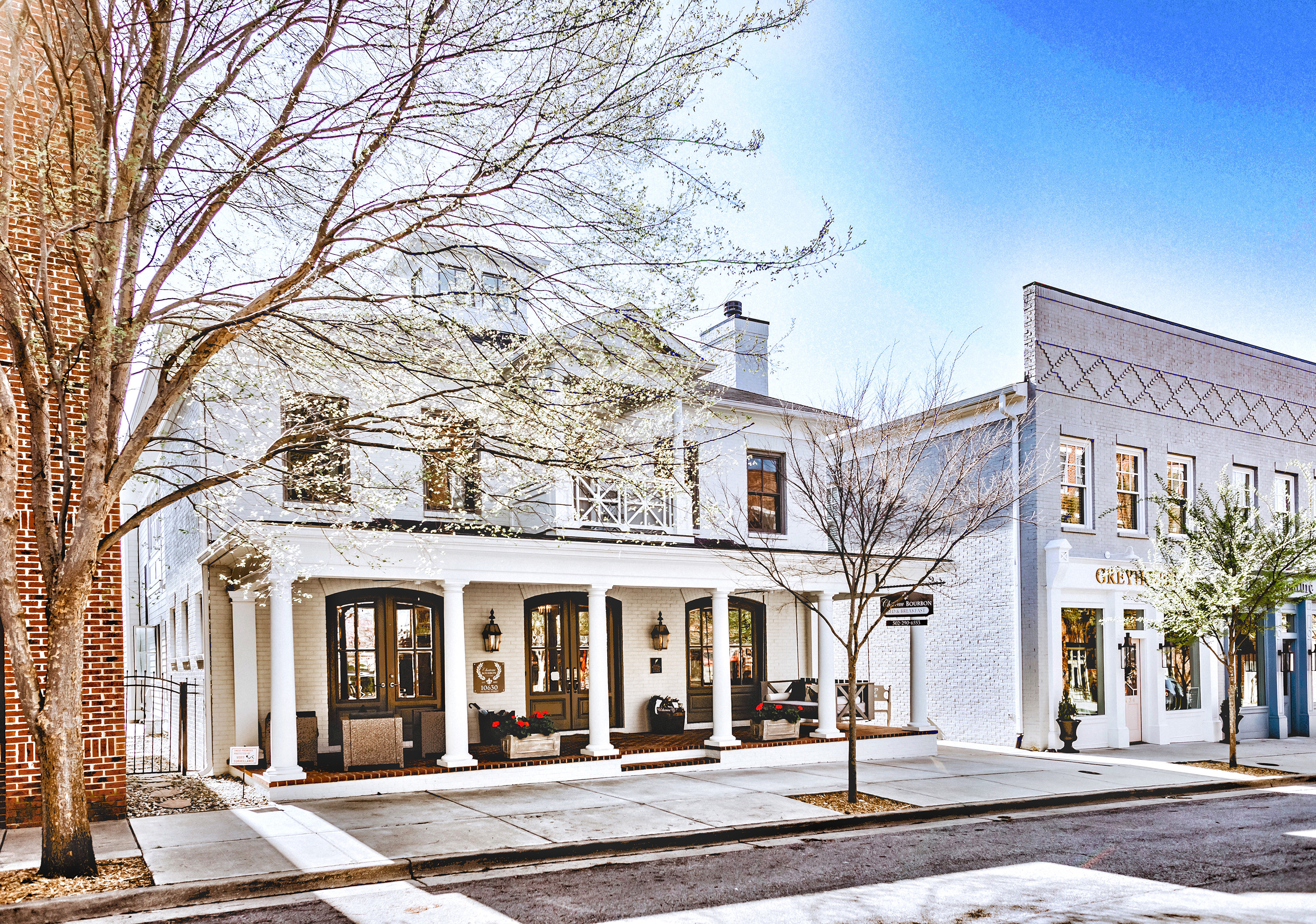 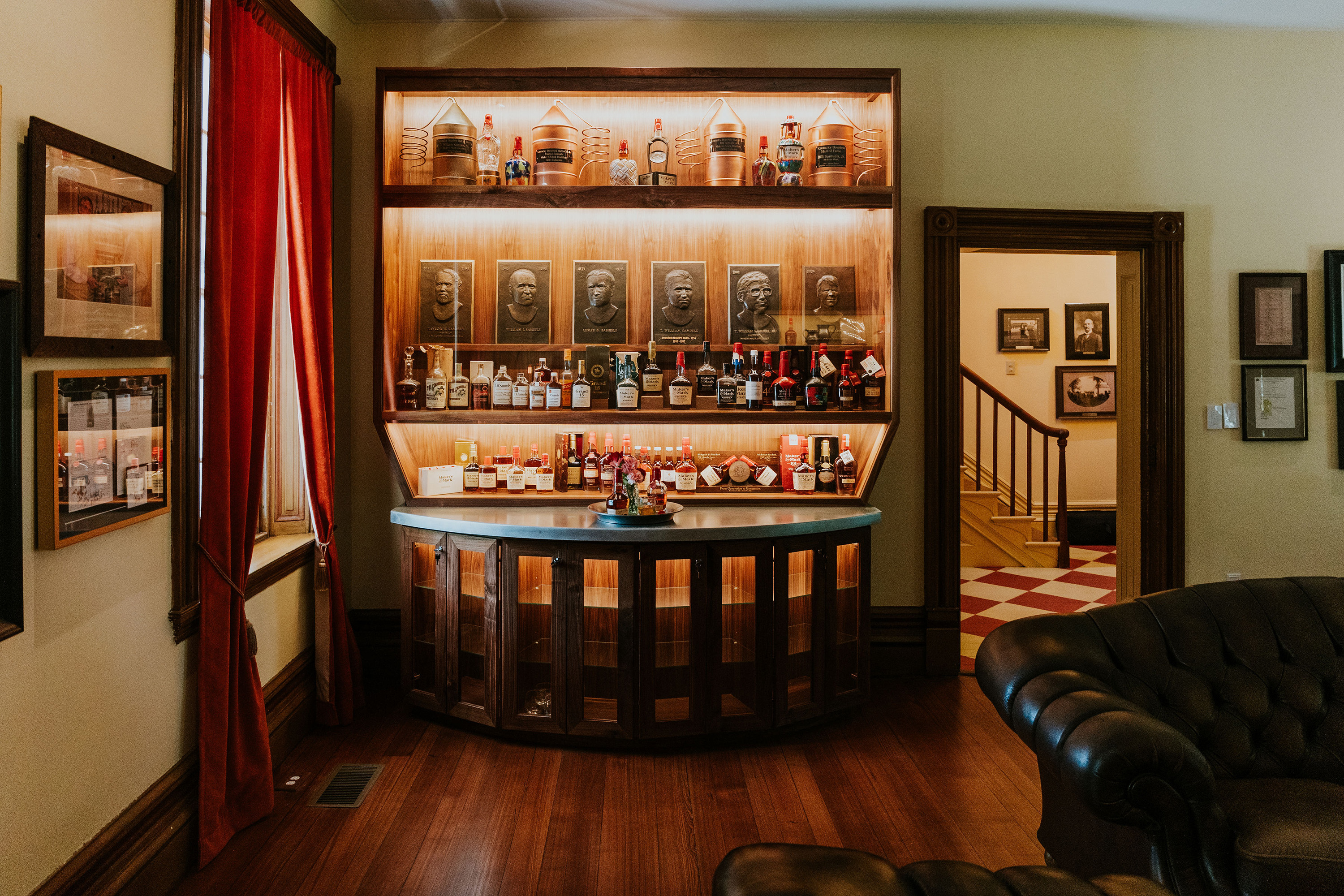 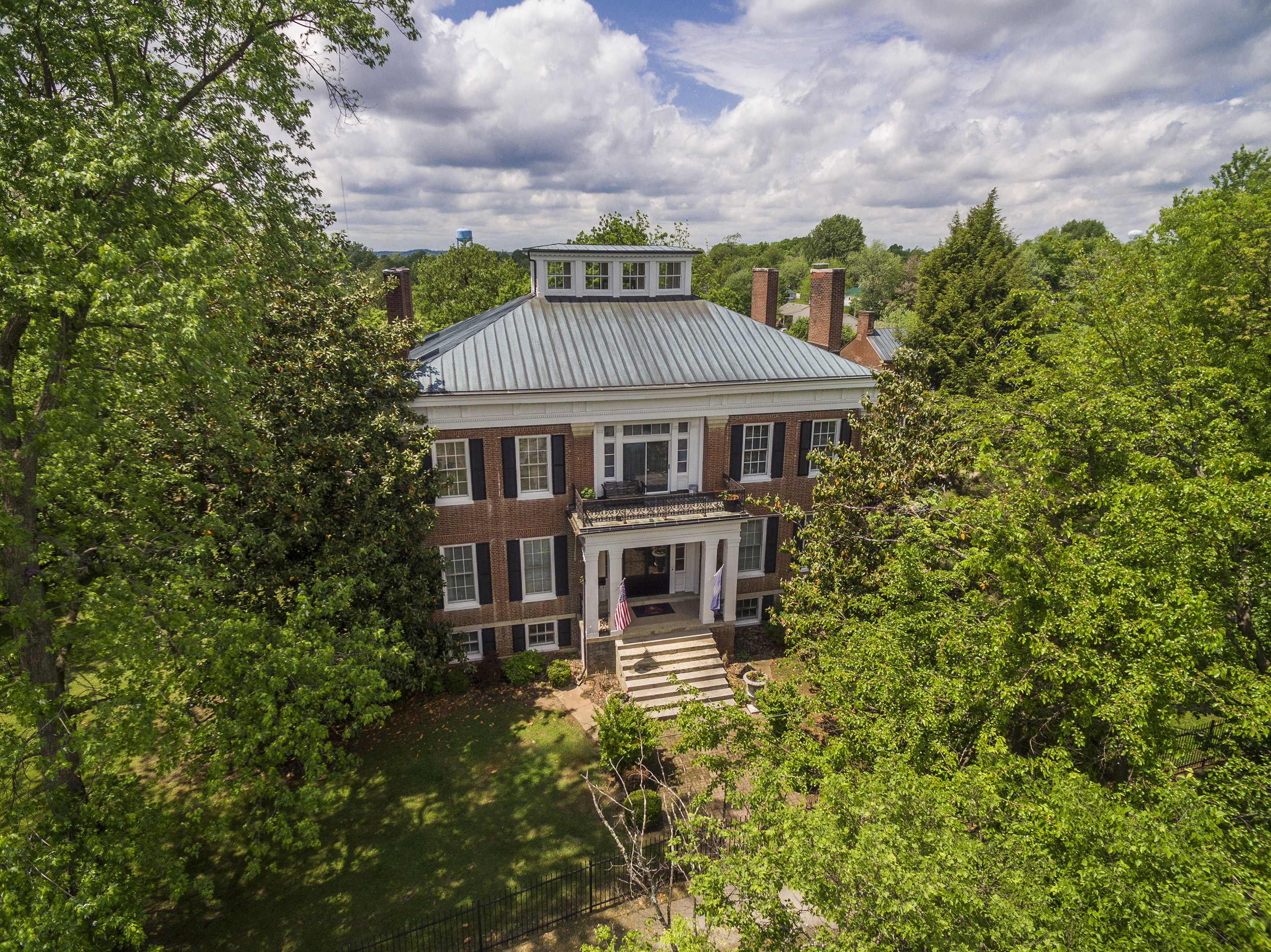 Bourbon Manor in Bardstown, Kentucky, is thought to be the first bourbon-themed bed-and-breakfast inn in the U.S. (Bourbon Manor/TNS) 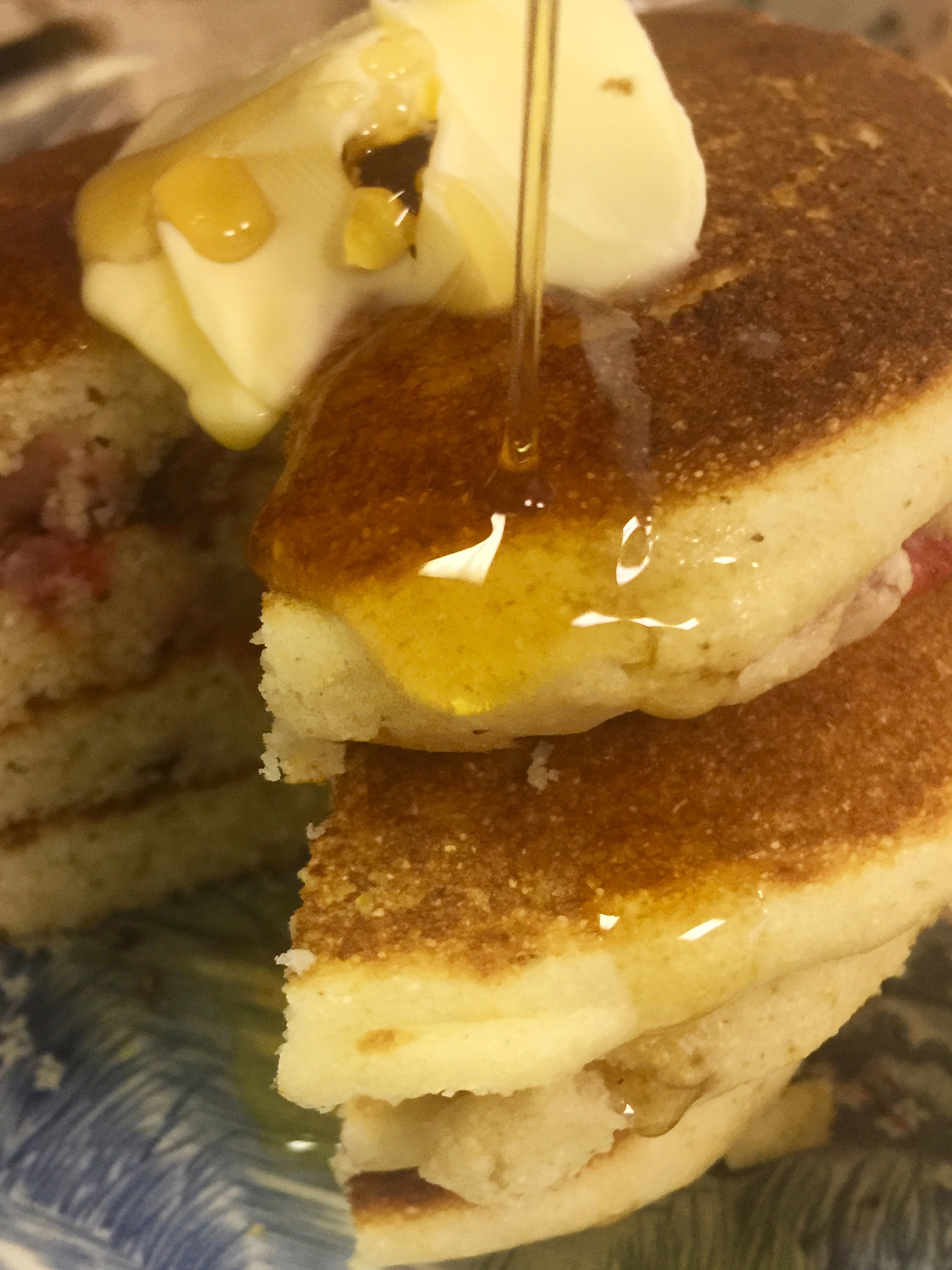 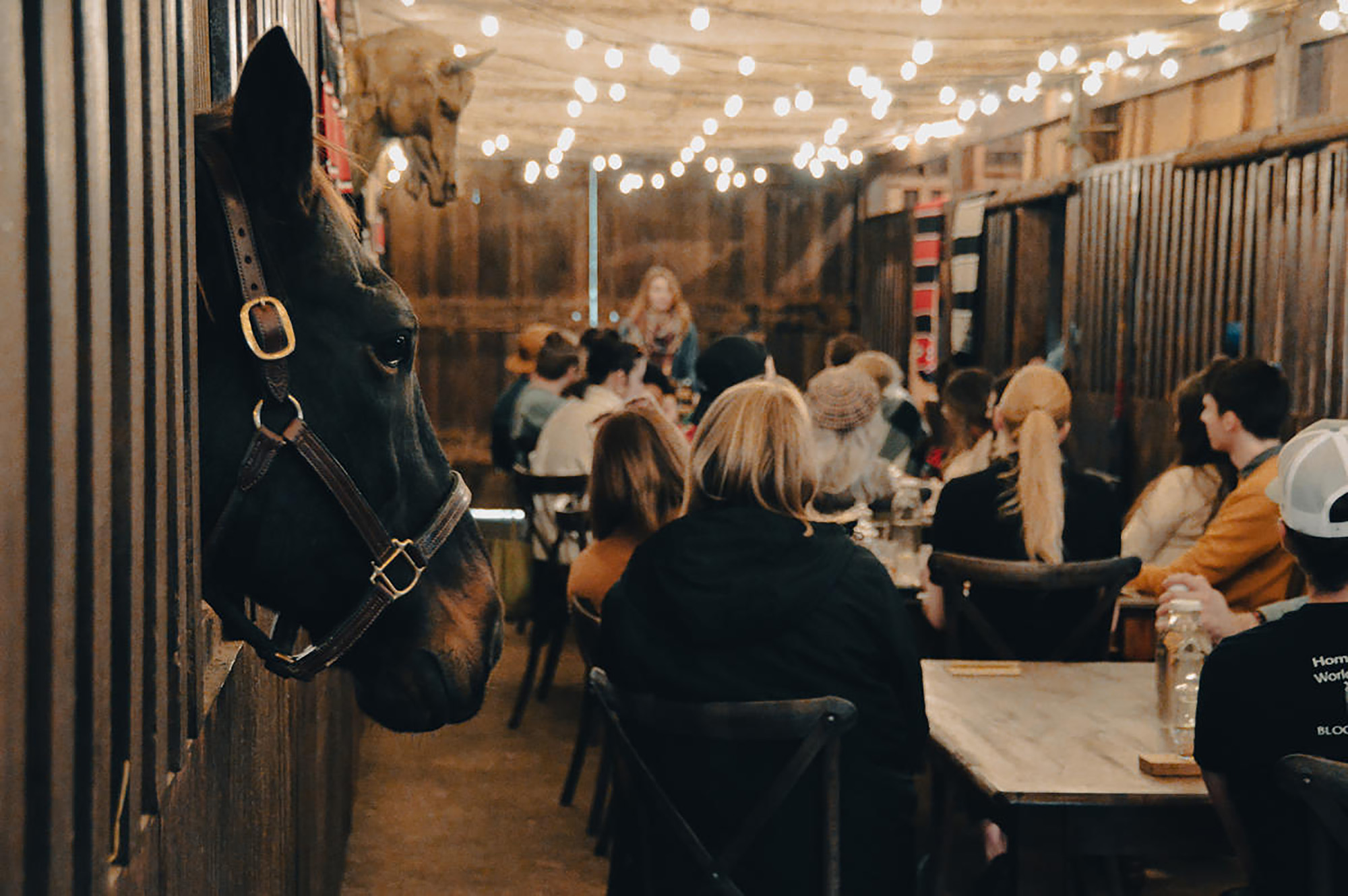 Hermitage Farm was once the home of Brown Gorman heiress Laura Lee Brown and her husband Steve Wilson. Now, it's a stylish stop on the Bourbon Trail. (Hermitage Farm/TNS)

Print Headline: Bourbon legends: These Kentucky inns offer a taste of history along with the famous drink