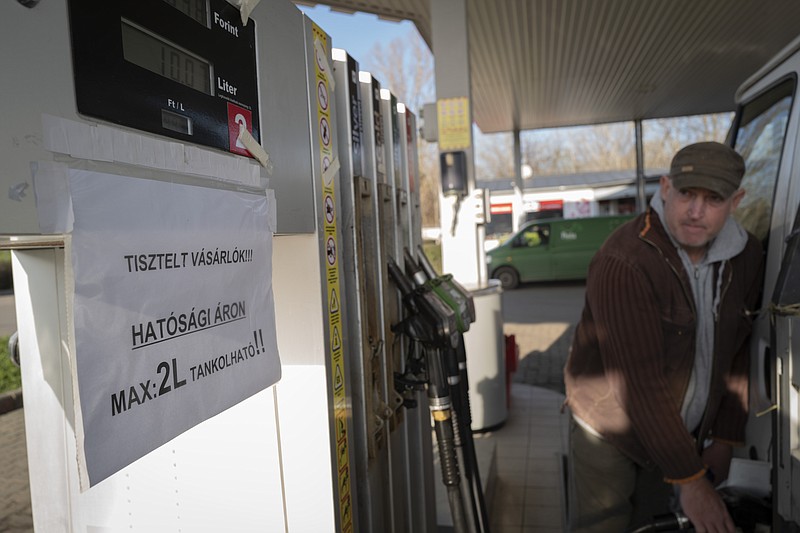 A driver fills up his car while sign on pump reads 'Dear Costumers! You can purchase only 2 liters of fuel at the regulated price!' in Martonvasar Hungary, Thursday, Dec. 1, 2022. Drivers in Hungary are running into fuel shortages at filling stations as a government-imposed price cap on fuel squeezes independent stations and leaves the state energy company struggling to keep up with demand. (AP Photo/Bela Szandelszky)

MARTONVASAR, Hungary (AP) -- Drivers in Hungary are increasingly running into gas and diesel shortages at filling stations as a government-imposed price cap squeezes the operators of independent stations and leaves the state energy company struggling to keep up with demand.

At hundreds of fuel stations across Hungary, a confusing mosaic of paper signs hang from the pumps to let customers know what is available -- or not -- and at what price and quantity.

A sign at one station in Martonvasar, a town 20 miles southwest of Budapest, Hungary's capital, informs motorists they may only purchase a half-gallon of fuel at a reduced price set by the government more than a year ago. The quantity limit, the station's owner said, is the result of state energy company MOL failing to make any fuel deliveries to his business and many others like it for the past three weeks.

"They reduced the supply to exactly zero, so fuel with a regulated price completely disappeared from the market for these stations," said Laszlo Gepesz, who owns the small station and is co-chair of Hungary's Association of Independent Filling Stations.

The cap on fuel prices that Hungary's populist government imposed in November 2021 set the maximum price for gasoline and diesel at $1.22 per liter.

That left only the state energy company to produce diesel and gas for selling at the reduced rate, but it has strained to supply the cheaper fuel for the entire country.

MOL says its refinery in the central Hungary town of Szazhalombatta is only operating at around 50 percent capacity due to technical difficulties. Interruptions to Hungary's oil supply through the Druzhba, or Friendship pipeline, which delivers crude to Hungary from Russia via Ukraine, have also contributed to lagging supplies.

MOL did not respond to a request for comment.

During the more than a year the price cap has been in place, consumption has soared, said Gepesz, the Martonvasar station owner, exacerbating supply problems which have affected as many as 500 stations across Hungary.

"Things that are cheap run out more easily, so people are buying fuel like there's no tomorrow," he said. "The country's total consumption (of fuel) is around 20-25 percent higher than it was last year, an amount that not even MOL is capable of supplying."

Speaking at a Wednesday news conference, Prime Minister Viktor Orban's chief of staff, Gergely Gulyas, said the price cap -- set to expire Dec. 31 after being extended several times -- could only remain in place as long as MOL is able to keep up with demand.

"If it can't, and if (fuel) has to be imported, then obviously the import price is much more expensive. So the question is for how long we can supply the country with gasoline and diesel," Gulyas said.

Hungary is highly dependent on Russian oil and gas. Its government has campaigned vigorously against European Union sanctions against Moscow-- especially those that would affect the import of fossil fuel products -- and blamed them for rising energy prices and soaring inflation.

Marika Vastag, 73, a farmer in the village of Pusztaszabolcs, filled up a 10-liter jerrycan with gas on Wednesday, paying the market price since discounted fuel had not been delivered to the station in more than two weeks.

She echoed Orban's claims that EU sanctions against Russia were primarily responsible for the increase in energy prices, and blamed the bloc for pressuring Hungary to wean itself off Russian fossil fuels.

"Things would be better if the (European) Union would quit giving us a hard time and stop demanding that we get off of Russian energy because, unfortunately, we are dependent on them for fuel and oil," Vastag said. "Unfortunately, we aren't independent, we don't have everything (we need.) So we have to stick with those that help." 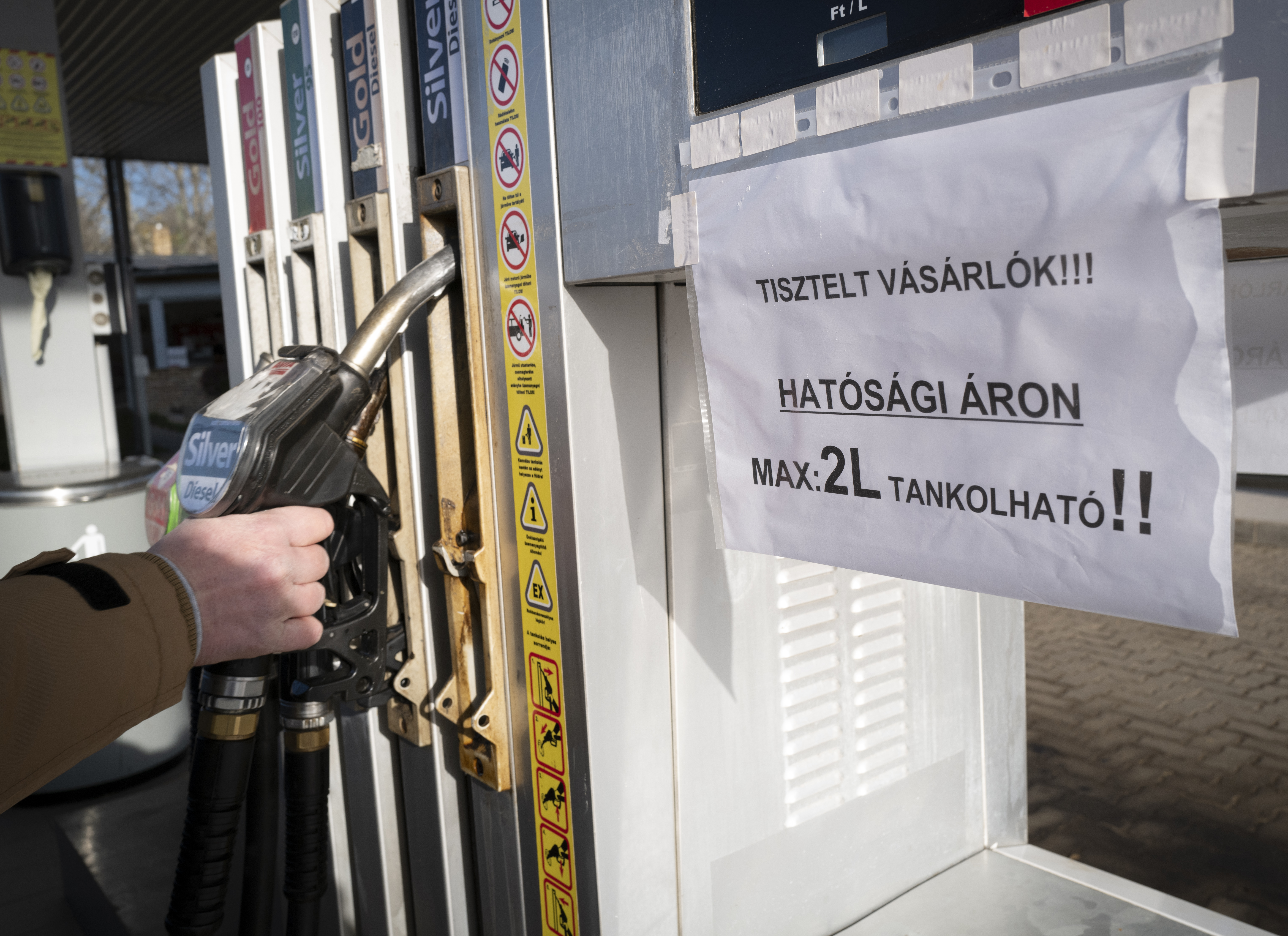 A view of a sign on a fuel pump at a petrol station reading 'Dear Costumers! You can purchase only 2 liters of fuel at the regulated price!' in Martonvasar Hungary, Thursday, Dec. 1, 2022. Drivers in Hungary are running into fuel shortages at filling stations as a government-imposed price cap on fuel squeezes independent stations and leaves the state energy company struggling to keep up with demand. (AP Photo/Bela Szandelszky)