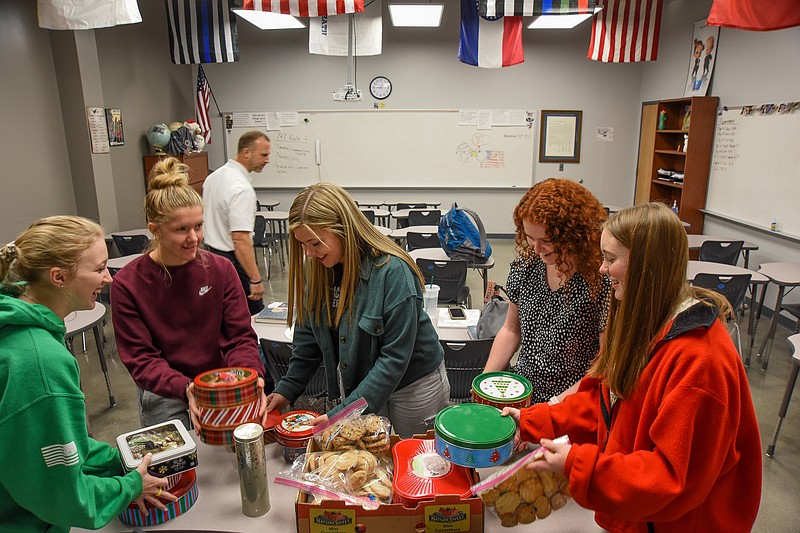 Julie Smith/News Tribune Nathan Holtmeyer walks behind students as they package cookies Thursday. Once again, Blair Oaks High School students volunteered to collect cookies, bake cookies and package them to be shipped to sailors on the USS Michael Murphy. In all, between donations from the community and ones baked by students, organizers hope to box up and ship about 150 dozen cookies. From left, students are: Mackenzie Davis, Clara Lackman, Lauren Brooks, Emma Scruggs and Lydia Downing.

Blair Oaks students, teachers and community members came together Thursday to send cookies to sailors aboard the USS Michael Murphy.

The USS Murphy is a destroyer based in Joint Base Pearl Harbor-Hickam in Hawaii. It holds 267 sailors and is named for Michael Murphy, a Medal of Honor recipient who was killed in action in Afghanistan in 2005. The ship was christened May 7, 2011, Murphy's birthday, by his mother, Maureen Murphy.

"And she said, 'Every year I bake cookies for the USS Michael Murphy, which is made in his name, and... if you guys ever want to, you can help.' Obviously she was joking," said Nathan Holtmeyer, Operation Bugle Boy Club sponsor.

But people at Blair Oaks took it seriously.

Nearly every year since then, Blair Oaks students, staff and community members have joined her in sending cookies to the ship.

This year, donors were asked to bring cookies in tins if possible because the cookies survive the shipping process better. Tins are more expensive to ship, so people were also asked to donate to cover that cost.

In the past, sailors have shared the cookies with others all around the world if they are in port.

In total, the goal was to send 150 dozen cookies to the sailors.

The students of Operation Bugle Boy Club gathered in the middle school family and consumer sciences room Thursday night, to make about half of the cookies.

Holtmeyer expected the cookie baking to take about four hours.

Christmas music played in the background and the sweet smell of baking cookies wafted out into the hall as students laughed, mixed, preheated ovens, spooned out dough and donned oven mitts.

Senior Zoee Brightwell has also been in the club for three years.

"I think it's important to serve our veterans in the best way that we can, since some of us aren't able to go into the military yet, and for those of us who have connections with it, I think it's a good way to show your appreciation for those who have served that either you're related to or those that you care about," she said.

Brightwell, whose mother runs a bakery, said she would rate her baking skills at a 10 -- though her mom's are at a 12, she said. She was happy to offer her experience making cookies from scratch.

Senior Kenley Mitchell has been in the club for three years.

"It's really fun, and I think it's really cool that we get to help local veterans, and it's just good to get involved in the community," she said.

Mitchell was confident she could deal with the pre-made dough, but not so confident about making the cookies herself.

"I can bake the store-bought ones, but making them from scratch is rough," Mitchell said with a laugh.

"We'll have to taste-test them," she added.

Other students were also careful to taste-test several of the ingredients, including sprinkles, in between batches. 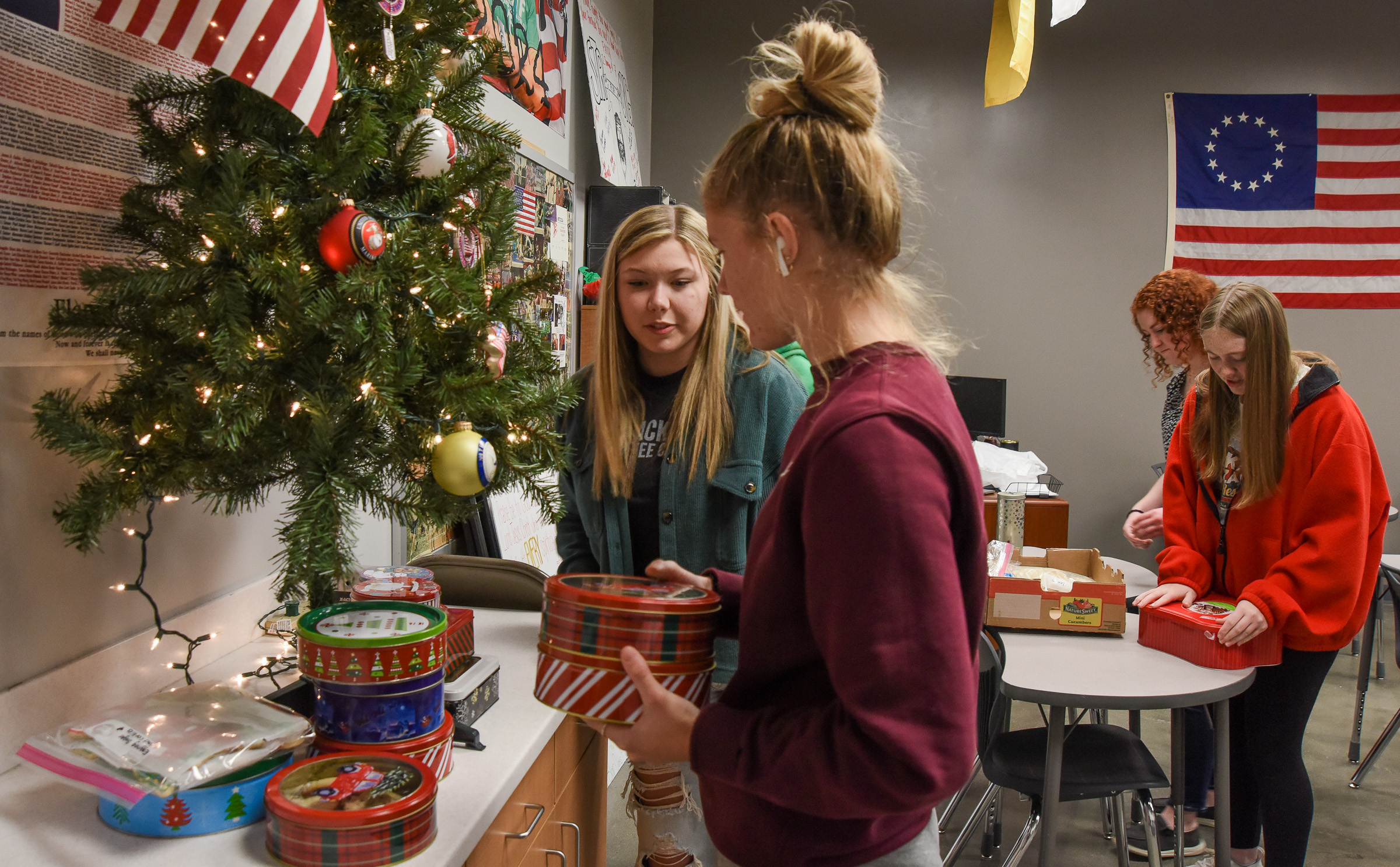 Julie Smith/News Tribune Clara Lackman, near, and Lauren Brooks place containers of cookies under the tree in Nathan Holtmeyer's classroom while Lydia Downing and Emma Scruggs package more at Blair Oaks High School Thursday. Once again students volunteered to collect cookies, bake cookies and package them to be shipped to sailors on the USS Michael Murphy. In all, between donations from the community and ones baked by students, organizers hope to box up and ship about 150 dozen cookies.