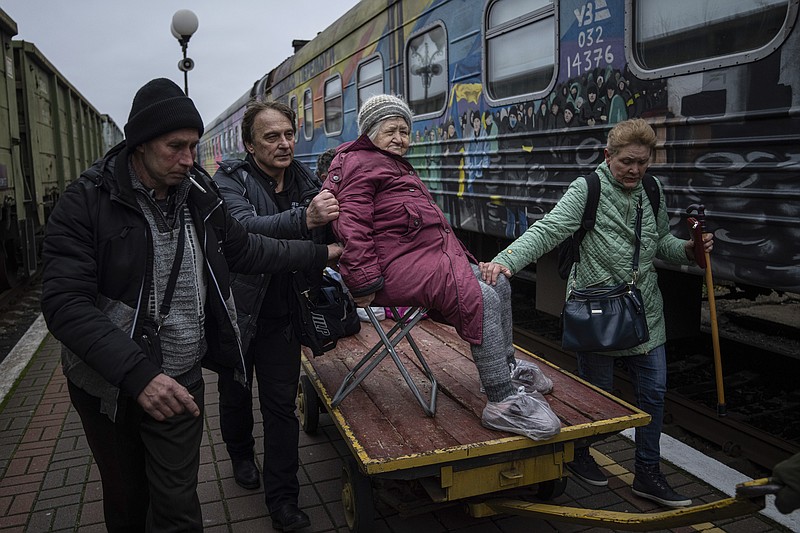 Relatives of Elizaveta, 94, transport her by a cargo cart to the evacuation train in Kherson, Ukraine, Thursday, Dec. 1, 2022. (AP Photo/Evgeniy Maloletka)

KHERSON, Ukraine (AP) -- Russian shelling cut off power Thursday in much of the recently liberated Ukrainian city of Kherson, just days after it was restored amid Moscow's ongoing drive to destroy key civilian infrastructure as freezing weather sets in.

In Kyiv, Mayor Vitali Klitschko warned the capital's millions of residents that they should stock up on water and preserved food to see them through a winter that could prove miserable if more energy infrastructure is damaged.

He also urged people to consider leaving the city to stay with friends or family elsewhere, if possible.

"Trying months lie ahead. The enemy still possesses substantial resources," Ukrainian Defense Minister Oleksiy Reznikov said. He added, however, "signs are accumulating that (Russia) needs a pause at all costs."

Ukraine has faced a blistering onslaught of Russian artillery fire and drone attacks since early October. The shelling has been especially intense in Kherson since Russian forces withdrew and Ukraine's army reclaimed the southern city almost three weeks ago.

Ukraine's presidential office said Thursday at least two civilians were killed and six others wounded nationwide by the latest Russian shelling. In Kherson, a 70-year-old woman was killed in her apartment and a 64-year-old man was wounded on the street. A 15-year-old boy died when a hospital in the northeastern Sumy region town of Bilopillia was hit, the presidential office said.

Local authorities said about two-thirds of Kherson had electricity as of Thursday night. Some residents congregated at the train station or at government-supported tents that provided heating, food, drinks and electricity to charge cellphones.

Walking gingerly toward an evacuation train, 79-year-old Liudmyla Biloshysta said she decided to leave and join her children in Kyiv because she feared conditions in Kherson would worsen.

"The strike was so massive our house even began to shake," Biloshysta said of the latest barrage. "These bombardments make me so scared."

Alluding to her birth during World War II, she said "I was a child of war and now I'm a granny in wartime."

Elsewhere in eastern Ukraine, Russian forces continued their attempts to encircle the Donetsk region city of Bakhmut, focusing on several villages around it and trying to cut a key highway.

In Berlin, NATO Secretary-General Jens Stoltenberg praised the "heroic resistance of the Ukrainian people" against Russia's attacks, saying that with the help of allies "Ukraine has made significant gains" on the battlefield.

"But we should not underestimate Russia," Stoltenberg warned in a speech at the Berlin Security Conference. "Russian missiles and drones continue to rain down on Ukrainian cities, civilians and critical infrastructure, causing enormous human suffering as winter sets in."

The NATO chief said Russian President Vladimir Putin had made "two big strategic mistakes" when he invaded Ukraine in February: underestimating Ukraine and underestimating the support NATO and its allies were willing to provide so the country could defense itself.

"As for attempts to establish some kind of tribunals, they will not have any legitimacy and will not be accepted by us. They will be condemned by us," Peskov said during a media briefing.

European Commission President Ursula von der Leyen said in a video message Wednesday that the EU would work with international partners to get "the broadest international support possible" for the proposed war crimes court while continuing to support the International Criminal Court.

Neither Russia nor Ukraine are among the ICC's 123 member states.

A taxi driver parks next to anti-tank hedgehogs, which were installed to protect the city from the Russian troops, in Kyiv, Ukraine, Thursday, Dec. 1, 2022. (AP Photo/Bernat Armangue)

Ukrainians unpack a power generator before installing it at a bank branch in Kyiv, Ukraine, Thursday, Dec. 1, 2022. (AP Photo/Bernat Armangue)

A woman walks between anti-tank hedgehogs, which were installed to protect the city from the Russian troops, in Kyiv, Ukraine, Thursday, Dec. 1, 2022. (AP Photo/Bernat Armangue) 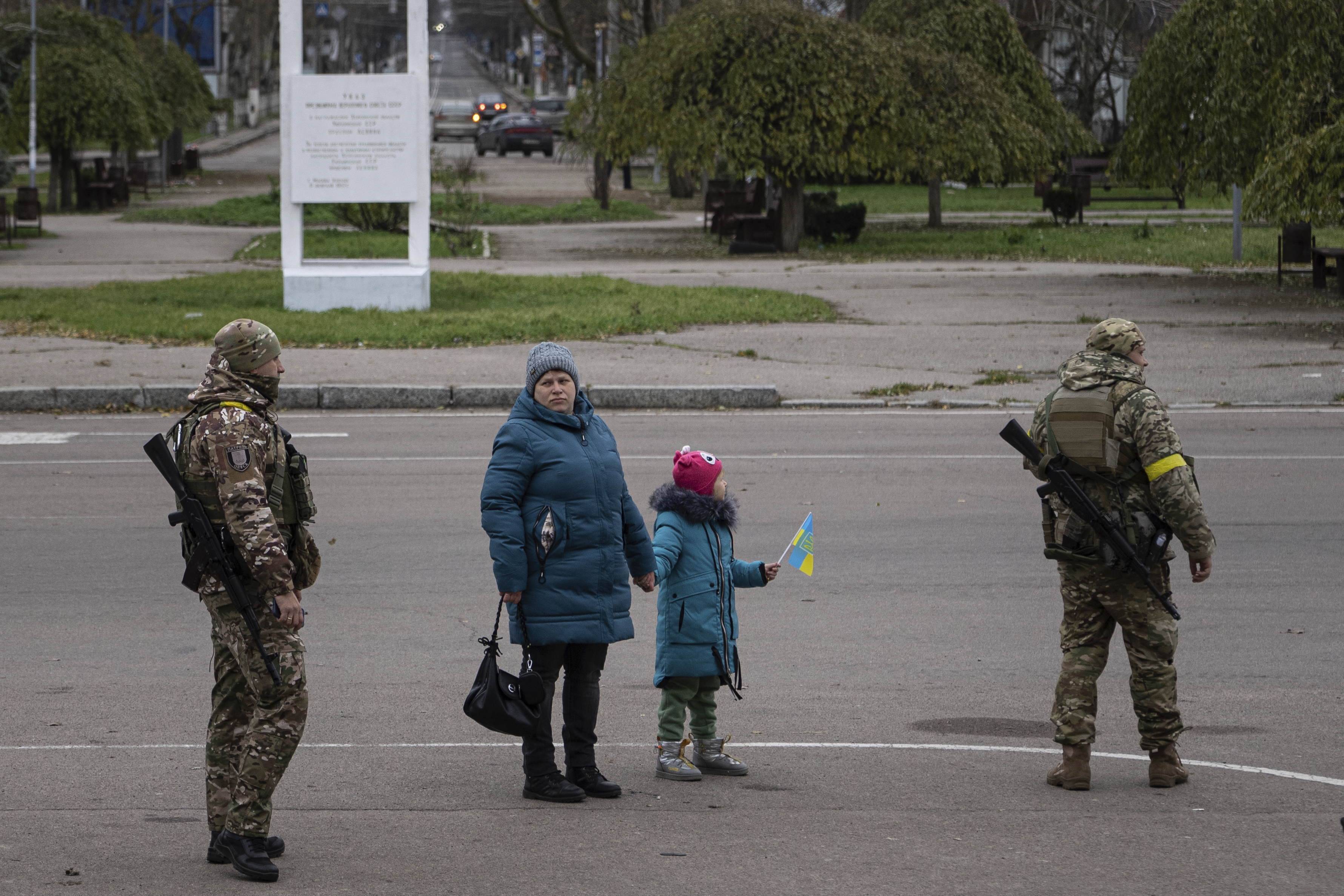 Oksana Korsh, 39, stands with her daughter Veronika, 5, after their evacuation by police officers to the train station in Kherson, Ukraine, Thursday, Dec. 1, 2022. Four members of Korsh's family decided to leave for Kyiv after their house was damaged by Russian shelling. (AP Photo/Evgeniy Maloletka)

A woman stands next to a picture with an artwork on concrete blocks which were installed to protect the city from the Russian troops, in the main square in Kyiv, Ukraine, Thursday, Dec. 1, 2022. The painting appears to have been made by British street artist Banksy, who confirmed this on his Instagram account. (AP Photo/Efrem Lukatsky)

Cars ride past anti-tanks hedgehogs which were installed to protect the city from the Russian troops, in the main square in Kyiv, Ukraine, Thursday, Dec. 1, 2022. (AP Photo/Efrem Lukatsky)