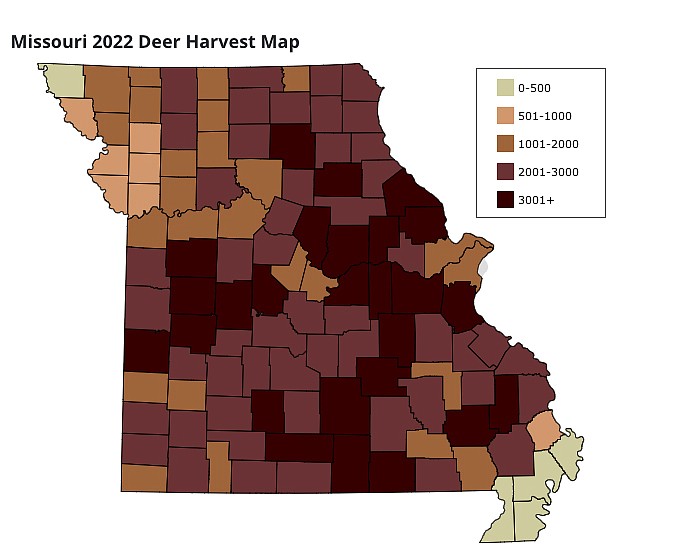 Osage County was one of the top yielding areas in Missouri for youth deer hunters this season.

Hunters ages 6-15 harvested 367 deer in Osage County between the early and late youth portions of this year's firearms deer season. It's the second most of any Missouri county, according to preliminary data from the Missouri Department of Conservation.

Youth deer hunting in Missouri is split between an early portion running Oct. 29-30 and the late portion Nov. 25-27. Hunters are restricted to taking one deer during the early youth portion and one antlered deer during the entirety of the firearms deer season.

MDC released preliminary figures for the late youth portion Monday. Of the 2,941 total deer harvested, 1,336 were antlered bucks, 1,278 were does and 327 were button bucks.

The 52 deer harvested from Osage County last weekend were added to the roughly 315 deer taken during the early youth portion of the season in October to put Osage near the top of total deer harvested by youths this firearms season. The 367 deer hunted in the county was only surpassed by 406 deer harvested in Franklin County.

MDC Cervid Program Supervisor Jason Isabelle said harvest totals for the late youth portion of the season have ranged from about 2,000 to just under 4,000 for the past several years.

"It's typical to see quite a bit of variability in the number of deer taken during our shorter season portions, due primarily to the effect of weather on deer movement, the number of hours hunters spend in the field, or both," Isabelle said in a news release Monday.

"This year's harvest total was slightly below average, but that wasn't unexpected given the rain that moved through portions of the state Saturday evening and Sunday morning," he continued.

Franklin County remained the hotspot with the most deer harvested at 4,182, followed by Texas County with 3,609.

Morgan County was close behind with 2,647 deer harvested during firearms season. Boone County had 2,193 deer harvested, but the remaining Mid-Missouri counties ranged from 1,266 in Cole County to 1,845 in Miller County.

MDC has found two cases of Chronic Wasting Disease so far this season, both inside management zones it established earlier this year. One case was in Franklin County and the other was in Adair County.

Of the total 22,932 deer that have been tested both inside and outside CWD management zones, 10,883 results have come back negative while 12,047 remain pending, according to MDC's regularly updated dashboard.

The archery deer season, which began Nov. 23, runs through Jan. 15. The antlerless portion of the firearms deer season runs Dec. 3-11 in most of the state, followed by the alternative methods portion from Dec. 24 through Jan. 3.