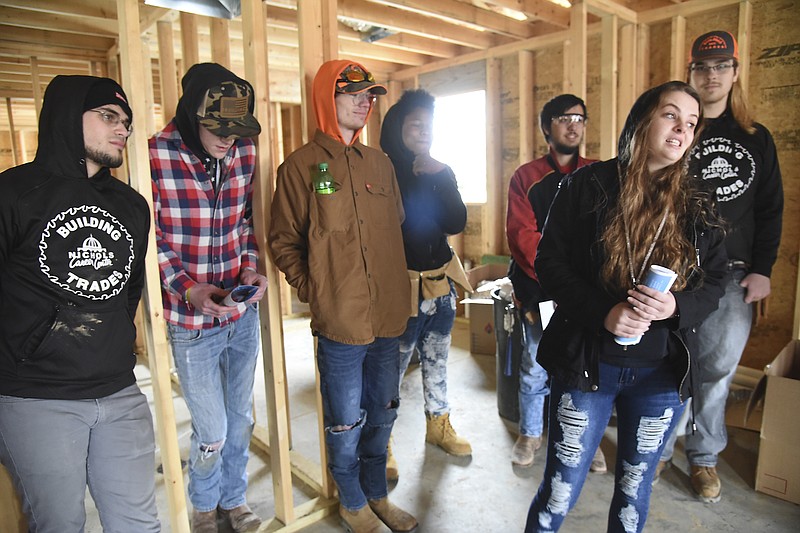 In this January 2020 file photo, Nikki Rapier, foreground right, thanks the Nichols Career Center Building Trades Class for their work on her one-story house during a 'Blessing of the Build' hosted by River City Habitat for Humanity. (Julie Smith/News Tribune file photo)

Nichols Career Center is set to receive up to $400,000 from the Missouri Department of Elementary and Secondary Education, which it plans to put toward the cost of a building trades building and a greenhouse.

The money comes from the Missouri's Area Career Center Opportunity Grant program, whose funds come from the American Rescue Plan Act, according to a Tuesday announcement.

The funds are to be used for: creating new programs; building new facilities; renovating or adding to facilities; updating current programs; dealing with safety and equipment needs; and upgrading equipment and technology.

"The Jefferson City School District has included plans to fund additional space for expanded programming in a bond issue, which will be on the ballot this April," he said. "If approved by voters, we plan on using most of this money to work in conjunction with the bond funds to build an exterior shop and classroom for our building trades program and a greenhouse for our agriculture education program."

That bond issue would also include the construction of a new early childhood center, movement of the Jefferson City Academic Center to the former Southwest Early Childhood Center building, and renovations for both middle schools, among other items.

Nichols is one of 51 career and technical centers to receive the grant. Each school was required to supply a 25 percent match for the funding. For Nichols, that would mean that the state is supplying $400,000, and the school district would offer about $133,000.