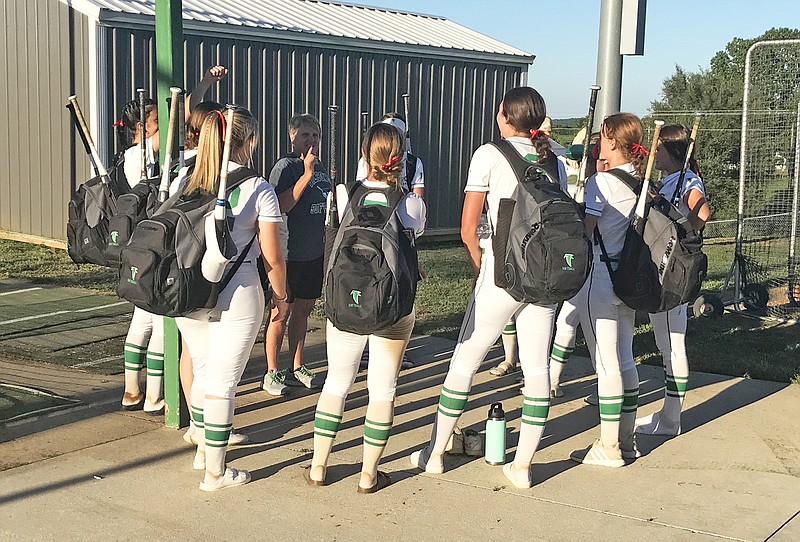 Then, in the fifth and sixth innings, nearly every batter stopped by third base to keep her company.

Blair Oaks scored all of their runs in the final two innings, turning a scoreless tie into an 11-0 rout in six innings against the Centralia Lady Panthers at the Falcon Athletic Complex.

“It got busy at third base and I was a lot less lonely,” Buschjost said.

Blair Oaks and Centralia put up zeros for the first four innings. Olivia Moyer faced the minimum through four innings for the Lady Falcons, while Kaelyn Walters left five runners on base for the Lady Panthers.

“I just kept hoping Olivia would keep them off the board,” Buschjost said.

“She kept us off-balance,” Buschjost said. “She mixed in enough of the offspeed stuff just to keep it tough on us.”

Centralia was the first team to put a runner on third base, doing so in the top of the fifth. With two outs, Madi Johnson blooped a double down the left-field line, then moved to third on a single to left field by Tilly Fox.

Moyer escaped her only jam of the game by getting a strikeout to strand both runners in scoring position. She finished with no walks and seven strikeouts in six innings, scattering three hits in the shutout.

“She has that potential to strike batters out,” Buschjost said. “She wants to dominate.”

Blair Oaks had been held to two hits through four innings, so Buschjost opted to try a little small ball.

Baley Rackers bunted to the third baseman and moved to second on an overthrow. The next batter, Kenzie Libbert, placed a bunt perfectly on the right side of the infield for a single.

“Those were well-executed,” Buschjost said. “Sometimes, you just have to look to that to get your team going.”

Emma Wolken reached on a fielder’s choice to load the bases, then Kally Bruce reached on an error, as Libbert jumped over the groundball and distracted the fielder, to score Blair Oaks’ first run.

“The less I have to speak at third base, in terms of making running decisions for them, the better the team is,” Buschjost said. “I value a player who can think for herself and use her instinct to run. I didn’t tell Belle Boessen to come to third base, she did it on her own.

“I just tell runners to go (home) and I trust good slides.”

Chesney Luebbering followed with an RBI single up the middle, then Morgan Luebbering hit a single to the same spot to score two more runs, extending the Lady Falcons’ lead to 6-0.

Blair Oaks followed with five runs in the sixth inning to win by run-rule.

“It was just a continuation of the fifth,” Buschjost said. “I’m a firm believer on when things start going well, it just becomes contagious.”

Wolken and Braun each had RBI singles in the sixth. Morgan Luebbering ended the game with a walk-off three-run home run to straightaway center field, the Lady Falcons’ first homer of the season.

“That was a huge hit for her,” Buschjost said of Morgan Luebbering, who had a team-high five RBI. “She crushed the ball.”

Libbert, Wolken, Braun and Chesney Luebbering each had two hits. Braun also had three RBI in the win.

Haley Klebba was the winning pitcher for Blair Oaks (3-1), striking out five and walking four. Madison Vaughan, Belle Boessen, Bria Boessen and Ava Willson each had one hit and two RBI.