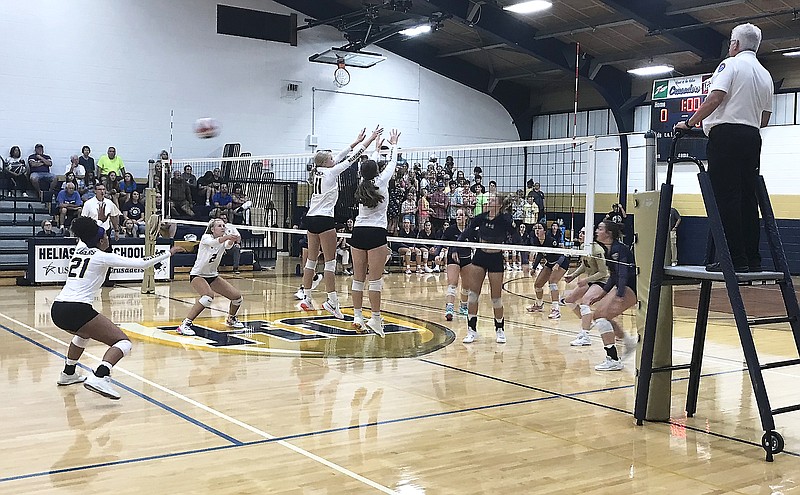 Helias middle hitter Summer Hake spikes the ball over a pair of Camdenton blockers for a kill during the third set of Monday's match at Helias Gym. (Greg Jackson/News Tribune)

It was a valuable learning experience Monday night for the Helias volleyball team.

It helps that it also came with a win.

The Lady Crusaders were one point away from trailing Camdenton two sets to one, but Helias rallied from a five-point deficit in the third set and went on to win 24-26, 25-14, 27-25, 25-14 in its home opener at Helias Gym.

Helias was down 19-24 in the third set, then fought off six set points from Camdenton to win the set and steal the momentum.

“I told the girls between sets, if we can play with that focus and that intensity all the time, then we’re going to be hard to beat,” Helias coach David Harris said.

Chapel Dobbs started the comeback with a kill, then Camdenton committed a pair of errors. A service ace by Landrey VanOverschelde closed Camdenton’s lead to 24-23.

“They just weren’t going to allow the team to lose,” Harris said.

Another kill by Dobbs tied the score, but a block by Camdenton’s Kenzie Swanson put the Lakers back in front and serving for set point No. 6.

Helias closed the set with consecutive kills by Dobbs, Faith Ann Meyer and another by Dobbs down the middle of the court to take the set win for the Lady Crusaders.

“We had the momentum and they were feeling down,” Harris said. “So if we jumped on them quick, I thought we had a chance to run away with it.”

And that’s just what happened, as Helias darted out to a 14-3 lead in the fourth set and continued to lead by double digits the rest of the match.

While Harris wasn’t thrilled to see his team in a position that required a comeback, he was glad to see the strong finish.

“We can use that and build on that for the rest of the season,” he said. “We can always look back and say, ‘Hey, do you remember that set against Camdenton when we were down?’ We can use that again in the future for their confidence.”

Helias led for most of the first set, but Camdenton finished on an 11-4 run to take a 1-0 lead.

After the final point in the opening set, the six Helias players on the court huddled together for about 20 seconds before making their way to the bench during the three-minute break between sets.

“We have good leadership, and that was an example of it,” Harris said. “Almost all of the seniors had something to say, and it was all positive and encouraging. Some of it was insightful about what they needed to do to play better.

“Those kind of things are good to see out of your senior leadership.”

After that first-set defeat, Dobbs took over at the net. She posted eight kills in the second set, eight more in the third set and nine in the fourth to finish with 28 kills.

Helias showed growth in other areas as the matched progressed.

The defense cut down on mistakes and extended volleys. Libero Izzy Herrbold led Helias with 20 digs.

“We’ve got three good defensive players,” Harris said. “Sometimes they hesitate a little bit, but when everything’s flowing well, our setters can make sets to the outside and our outside hitters can get a good swing.”

Serving also improved for Helias from start to finish. The Lady Crusaders made five service errors in the first set and four in the third set, but they made just one service error in the final set, which came with Helias serving for match point.

“We struggled with that over the weekend, especially on first serves,” Harris said. “It was nice to see, especially at the end of the third set, when we couldn’t afford to miss a serve.”

Josie Morasch finished the match with her 10th kill.

“When Chapel’s not on the front row, she’s one of our go-to hitters,” Harris said.

VanOverschelde had a team-high 26 assists, followed by Tori Schmidt with 20. Schmidt and Herrbold had 15 and 12 service points, respectively.

Camdenton (0-1), which is in the same district as Helias, was led by Bella Breuer with six kills, while Swanson had five kills and five blocks.

“We played in a couple tournaments with them this summer, but we never got to play them,” Harris said. “By the end of the season, come district time, they could be a force to be reckoned with.”

Helias (3-1-2) plays today at Fatima. The freshman match begins at 5 p.m., followed by the JV and varsity matches.