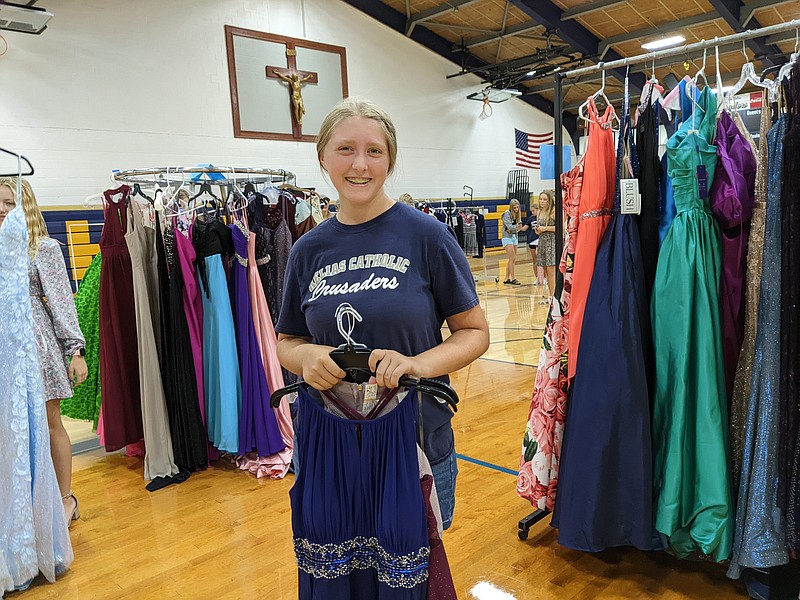 Bethanie Keilholz, a freshman at Helias Catholic High School, picked out a couple potential Homecoming dresses to try on Sunday, Aug. 28, 2022, at the annual dress sale sponsored by the Helias Parents' Club. She said she wasn't looking for anything in particular, but wanted to shop to compare options. (News Tribune photo)

With Homecoming season just around the corner, young women are scouring the racks for a perfect fit.

But the answer could have been available Sunday at the Helias Catholic High School Auxiliary Gym.

The Helias Parents' Club hosted its annual dress sale, attracting hundreds of area students to sell their old formal dresses and shoes in search of a new style.

Amy Vanoverschelde, one of the event's three co-chairs, said a couple hundred dresses were available before doors opened for VIP shopping at 1 p.m.

With a $5 entry fee, VIP shoppers got the first look at dresses before open shopping began an hour later. Before doors opened, Vanoverschelde and other organizers began accepting dresses and shoes to be sold throughout the day.

To sell, the owner of the clothing item would donate $5 for dresses and $2 for shoes and set the price of the item to be sold. The Helias Parents' Club tries to sell the item throughout the day, and if sold, the original owner collects the profit. Unsold items were picked up by the original owner or donated to the Helias theater department to be used for costuming and material.

Vanoverschelde said VIP shopping usually brings a large crowd because it offers the first choice of the "sparkly, gorgeous" dresses.

The $5 required VIP entry fee is dropped after the first hour and the rush for open shopping picks up. From there, it's steady for the rest of the day, Vanoverschelde said.

Vanoverschelde, who went to Eugene High School, said she always looks forward to the Helias dress sale just to see what was being offered. You never know what style or fit you might find, she said.

"I have three daughters and a son, so I love getting a good deal on a dress," she said. "And, you know, dresses are crazy expensive so it is nice to be able to offer dresses to everybody at every price range."

Bethanie Keilholz, a freshman at Helias, stopped at the sale to look for a Homecoming dress.

She said she wasn't looking for anything in particular but wanted to compare options and prices with more traditional retailers.

"It's cool because we can just come here instead of going to like different stores," Keilholz said.

In addition to providing students new shopping opportunities, the dress sale also acts as a fundraiser for the Helias Parents' Club, Vanoverschelde said, with $10 from every sale going to the organization.

The Parents' Club collects the $5 fee charged to put clothing up for sale and a $5 fee with every purchase. Those funds are combined with sales of concessions and other revenue from fundraising events to support Helias.

Earlier this year, the Parents' Club donated $33,000 to the school.

Vanoverschelde said her goal for this year's event was to maintain the success of previous years and keep it moving forward.

"If we have lots of people come in to buy dresses, the people who brought dresses will want to keep doing that in future years," she said. "If we don't have a lot of dresses sold, then people will be like, 'Why bring it?'"

Part of those efforts involve making sure enough people know about the sale.

She said she's sure social media has an impact on participation with the dress sale, but she's not sure how much.

"We have a lot of students that come and look, but it's kind of funny because with Instagram closets, a lot of girls will trade dresses that way," she said. "But yeah, it is a pretty popular event."

Although hosted by Helias, Vanoverschelde said the event attracts girls from several area high schools who want to shop and sell.

Classes started just a few weeks ago, but Vanoverschelde said Homecoming season is just around the corner and parents are starting to prepare.

"It's coming up fast," said Heather Nilges, who was shopping with her daughter, Chloe. "It's early this year."

Chloe, a freshman at Helias, found a Homecoming dress Sunday and said she had a good experience shopping. Her mother said it was their first time at the dress sale and that paying the extra $5 for VIP shopping was absolutely worth it.

"We didn't have this when I was growing up," Heather Nilges said. "A lot of us girls would just get together and kind of swap, so this is a good opportunity to get rid of what the previous girls have if they don't want them anymore. I think it's a good deal. We'll definitely be back when they do it again."

Heather Nilges added the dress sale is a convenient stop because Jefferson City doesn't have a wide range of formal retail options to choose from. She said she went to Dillards on Saturday but left empty handed.

"Other than that, there's nothing here in town, so we have to go to Columbia," Nilges said. "So this is perfect, plus you're not paying a huge amount of money."

The Helias Homecoming parade is Thursday, Sept. 22, with the dance set for the evening of Saturday, Sept. 24. 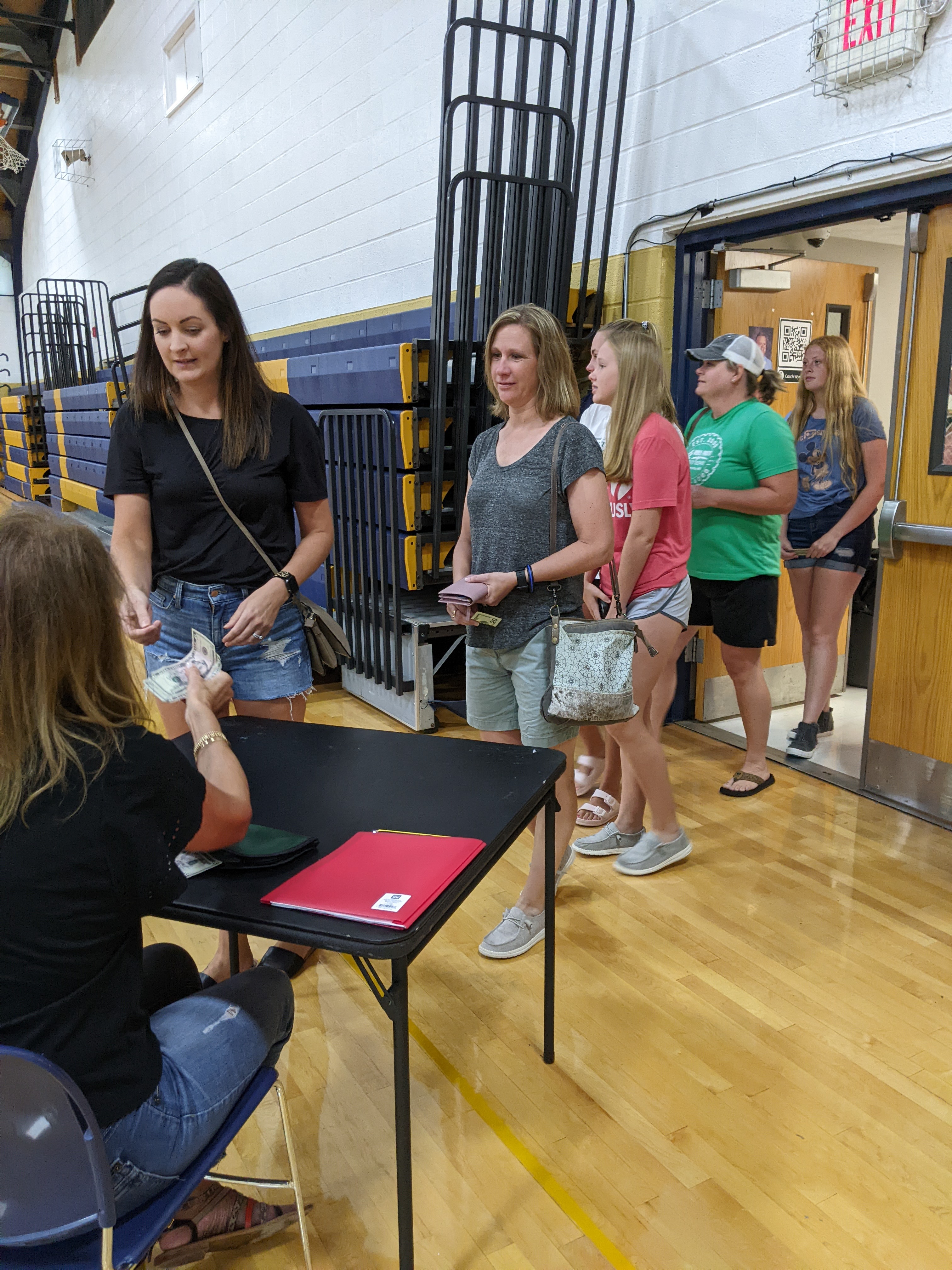 Danielle Vocks was one of a couple dozen to pay $5 for VIP shopping at the Helias dress sale Sunday, Aug. 28, 2022, at Helias Catholic High School. Vocks was shopping with Ava Lake, a freshman at Helias, and they were among the first to scour the racks. (News Tribune photo) 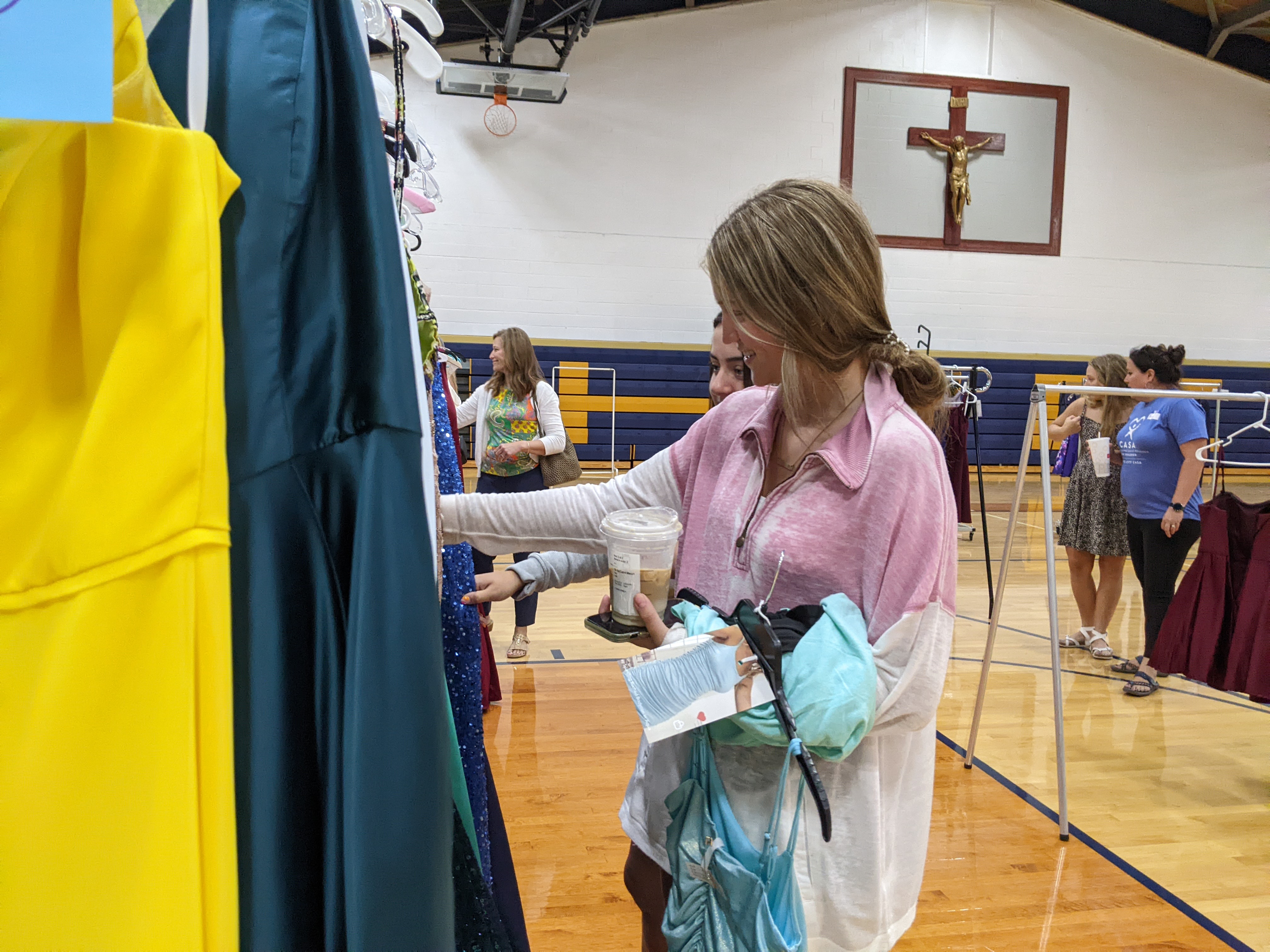