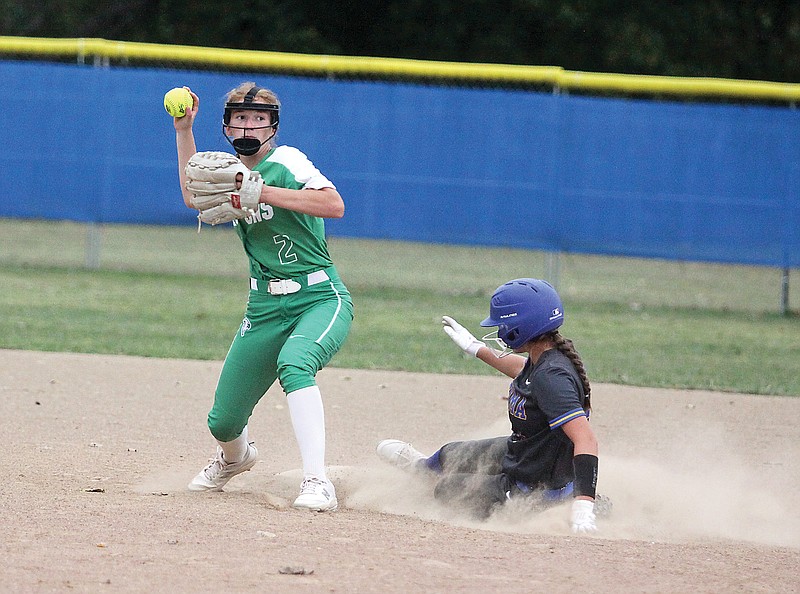 Blair Oaks shortstop Emma Wolken looks to throw to first base after forcing out Fatima’s Allison Schwartze during the fourth inning of last season’s game at Lions Field in Westphalia. (Greg Jackson/News Tribune)

WARDSVILLE -- The Blair Oaks Lady Falcons are making it a habit to finish their softball seasons with an appearance in the Final Four.

Last year was no exception, but capping 2021 with the program’s second state championship had a nice ring to it.

“We definitely feel good about what we just accomplished,” Blair Oaks coach Sharon Buschjost said. “But with another new year comes a whole new set of challenges.

“Now the challenge, or the fun part, is seeing who’s going to ultimately find their way into the starting lineup.”

Olivia Moyer will take over the No. 1 spot in the pitcher’s circle this season for the Lady Falcons, replacing all-state pitcher Andi Siebeneck.

Moyer, a senior right-hander who has committed to play at Northwest Missouri, went 8-2 with a 1.55 ERA and 93 strikeouts in 58⅔ innings pitched last season.

“She left no doubt in our minds as coaches what this year would be like with her in the circle,” Buschjost said. “She had a great season last year, and we know how much she wants it and how excited she is to be the No. 1 pitcher.”

Ava Willson, a sophomore, will be Blair Oaks’ No. 2 pitcher this season.

Coming back behind the plate is junior catcher Kally Bruce, one of four returning starters for the Lady Falcons.

“That’s why the confidence level for us coaches is so high with the pitching, because of who is on the receiving end of that,” Buschjost said. “Kally’s level of play gets better and better every year.”

The other three returning starters are all on the infield: Kenzie Libbert at third base, Emma Wolken at shortstop and Taylor Groner at first base, all seniors.

“That gives the rest of the players a lot of confidence, knowing we have that experience there,” Buschjost said. “All of the seniors have been very good about taking that leadership role and helping the younger players.”

Taking over at second base is another senior, Kenadi Braun.

“She has been impressive us as a hitter,” Buschjost said.

However, Groner will miss the start of the season due to illness, so junior Morgan Luebbering will start at first base until she returns.

Sophomores Bria Boessen and Madison Vaughan will be used courtesy runners or pinch runners off the bench. Last season, Rackers scored 29 runs and Luebbering crossed the plate 22 times, primarily getting their varsity experience in those roles.

“One of the hardest things to do as a coach is convince pinch runners and courtesy runners just how valuable they are to the team,” Buschjost said. “Players tend to not feel valuable unless their starters, but last year especially, those roles played a huge part.”

In the Hickman Jamboree earlier this month, Blair Oaks won three-inning matchups against Hickman (8-0) and Battle (13-6) before losing to Rock Bridge (3-0).

“We had four doubles in our first six batters,” Buschjost said. “Offensively, we were explosive.”

Libbert -- who hit a leadoff double off the fence in the bottom of the seventh inning and scored the winning run in last year’s state championship game -- will be the leadoff batter for the Lady Falcons. She’ll be followed in the top of the order by Wolken, Bruce and Kenadi Braun.

During the Jamboree, Chesney Luebbering, Morgan Luebbering, Julie Braun, Moyer and Rackers rounded out the rest of the batting order. When Groner returns, she’ll be in the mix in the middle of the order after batting fifth last season.

Blair Oaks’ schedule is nearly identical to last season’s, with the season opener tonight at Troy-Buchanan and the home opener Tuesday against Centralia. But the end of the regular season received an upgrade.

Blair Oaks will close the regular season with a home doubleheader Oct. 8 against Helias and Iberia.

Before that, the Lady Falcons will play Chillicothe -- a rematch of last year’s Class 3 state title game -- on Oct. 6 at Mizzou Softball Stadium in Columbia.

“Chillicothe reached out and we started communicating with them,” Buschjost said. “… That makes it a very busy week leading up to districts, but it was hard to resist that opportunity for our players. We definitely said yes to that.”

Blair Oaks has been assigned to Class 3 District 5. Also in that district is Fatima, a team the Lady Falcons have faced in seven of the past eight postseasons.

“I think both Fatima and us just expect to be in each other’s district because it happens just about every year,” Buschjost said.