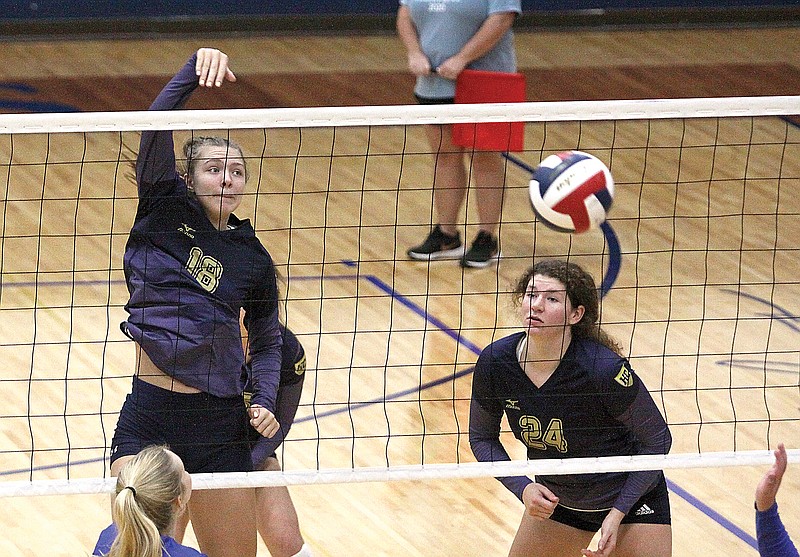 It’s going to be a senior-heavy roster for the Helias volleyball team this season.

That’s usually a good thing. But when that team is coming off a 24-win season, it’s a great thing.

“This is a fun group to coach,” Helias coach David Harris said, as the Lady Crusaders open their season today at the Visitation Academy Tournament. “They’ve got good chemistry, they’ve got good leadership. Both of those things are very important.”

Helias has eight seniors on the roster, and all eight played on the varsity level last season. The Lady Crusaders will round out the roster with five juniors, one sophomore and two freshmen.

“I really like the makeup of this team,” Harris said. “It seems like I say this every year, but we’re versatile. We have several different players that can play different positions, which is going to be helpful.”

Leading the Lady Crusaders will be senior outside hitter Chapel Dobbs, a two-time all-state player. She led the team with 370 kill last season.

Another four-year varsity player is senior Landrey VanOverschelde, who had a team-best 506 assists in 2021.

“The longer I coach, the more I value experience,” Harris said. “… It’s pretty rare when you have two players who have been starters all four years. I think I’ve only had that happen one other time.

“They continue to get better year after year. It’s going to be exciting to see them play this year.”

Another senior, Josie Morasch, will start at outside hitter with Dobbs. She is coming off knee surgery in the spring, but Harris said it wasn’t a serious injury and she was able to rehab quickly and play with the team during the summer months.

“She has stepped up and played really well,” he said.

At middle hitter will be a pair of seniors, Summer Hake and Faith Ann Meyer. Hake is second among returners with 154 kills and had a team-high 88 blocks last season.

“Those are going to be my anchors on the front row,” Harris said.

With a 6-2 offense, senior Tori Schmidt will join VanOverschelde at setter. Harris said both players even spent some time on the front row during the summer.

“It’s not something that we’ve done a lot in the past, to let the setters play all the way around, but there will be some times where we’re going to do that this year,” he said.

Harris said there are three defensive specialists who could also play libero this season for Helias: seniors Hannah Luetkemeyer and Ava Millard and junior Izzy Herrbold.

Harris said whichever player handles serve-receive passing, serves well and plays defense within a rally the best will get the nod at libero.

“We’ve been rotating them around, they’re all getting a chance,” Harris said. “They’re encouraging each other and helping each other out, which is good to see.

“They can all do all three, so I’m going to have to make a decision here before too long.”

Others who may see significant playing time this season are juniors Libby Gaines, Mary Lloyd and Madison Kempker, all at outside hitter.

Rounding out the varsity roster are junior Addisyn Bryant at setter, sophomore Hannah Hentges at outside hitter, freshman Cora Steinlage at middle hitter and freshman Sophie Verslues at defensive specialist.

Today’s tournament in St. Louis is new to the Helias schedule. Visitation Academy, Lindbergh and Westminster Christian are among the top teams participating.

“We wanted to do something different, and it’s been a while since we’ve played in a tournament in St. Louis,” Harris said. “They had an opening, so we took it.”

Helias’ home opener is Monday against Camdenton. However, the home-court advantage will be a little different to start the season.

“We’ve had tough schedules in the past, but last year, we played 17 matches against district champions,” Harris said. “Several of those teams went to the Final Four.

“We should have another really tough schedule that tests us and prepares us for the postseason.”