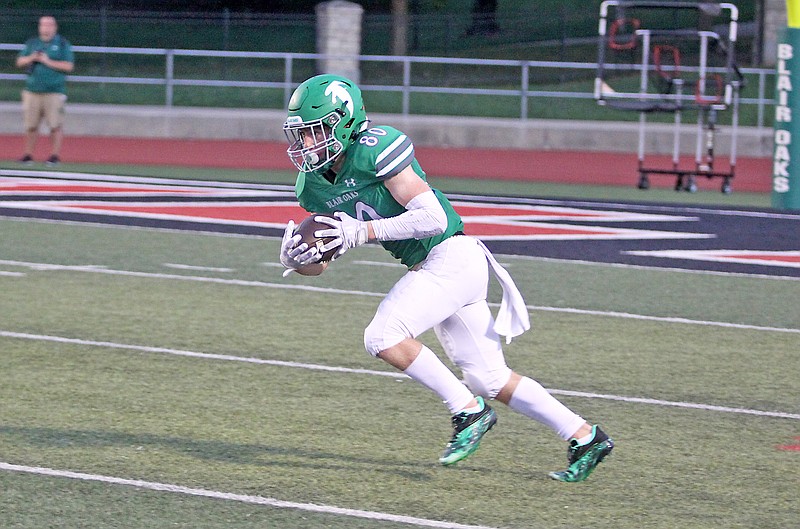 Nick Closser returns a kickoff for the Falcons during the first half of Friday's game against Maryville in the Kickoff Classic at UCM's Walton Stadium in Warrensburg. (Greg Jackson/News Tribune)

He opted to go for the dagger play instead.

Facing third-and-11, Hair completed a deep pass to Nick Closser for an 87-yard touchdown with 1:33 remaining in the game. That score helped seal a 54-42 win for the Falcons against the Maryville Spoofhounds in the Kickoff Classic at UCM’s Walton Stadium.

“All I asked them to do was make the play,” Blair Oaks coach Ted LePage said.

The Falcons received the opening kick and finished a 12-play, 64-yard drive with an 11-yard touchdown run by Hair, his first of four rushing touchdowns in the win. Nolan Laughlin added the extra point to make the score 7-0 with 6:38 left in the first quarter.

The Blair Oaks defense started the game with a pair of three-and-outs against Maryville. The Spoofhounds, known for their wing-T offense, decided to abandon that and start throwing the ball, to the tune of 33 passing attempts, an astoundingly high number for their offense.

The Falcons scored four touchdowns in the second quarter to build a 34-14 halftime lead.

Hayden Lackman, a freshman who got the start at running back for the Falcons, scored on a 22-yard run. Hair threw a 63-yard touchdown pass to Adam Hall, which was sandwiched between Hair touchdown runs of 63 and 5 yards.

Burns recovered a fumble in the end zone for a touchdown on Maryville’s opening drive of the second half. Blair Oaks answered with a 36-yard touchdown run by Hair. That score gave the Falcons their largest lead of the game at 42-21 with 4:58 left in the third quarter.

The Spoofhounds closed the gap to single digits, as Davis caught a 66-yard touchdown pass from Quinlin on the next play. After a Blair Oaks punt, Maryville moved the ball 97 yards down the field, ending with a 9-yard score by Quinlin to make the score 42-35 with 8:34 to play.

Facing third-and-4, Hair completed a 51-yard touchdown pass to Nick Closser to widen the Blair Oaks lead to 48-35 with 7:07 remaining.

The two teams traded interceptions, then Maryville scored on a 12-yard pass from Quinlin to Burns to with 3:20 to play, cutting the Spoofhounds’ deficit to 48-42.

Hair ran for a first down on the next possession, but a holding penalty brought the ball back to the Falcons’ 13-yard line. Hair already had nine carries of 10 or more yards in the game, but Blair Oaks chose to throw the ball deep on third-and-long instead.

Hair’s deep pass found the hands of Closser along the right sideline and the wide receiver darted into the end zone, capping the biggest play of the game for the Falcons.

Jake Hagner intercepted a pass from Quinlin on Maryville’s next possession and Blair Oaks ran out the clock. Doug Blaha and Alec Wieberg also recorded interceptions for the Falcons.

“We want to be 1-0,” said LePage, who passed Brad Drehle as Blair Oaks’ winningest football coach with Friday’s season-opening win. LePage has a 98-18 record as he starts his 10th season with the Falcons.

Closser caught five passes for 174 yards, while Hall accounted for the remaining 76 yards through the air for Blair Oaks.

Blair Oaks (1-0) hosts Lutheran North for its home opener next Friday at the Falcon Athletic Complex, the first regular-season meeting between the two teams. Kickoff is at 7 p.m.

Maryville (0-1) hosts Harrisonville (0-1) for its home opener next Friday.