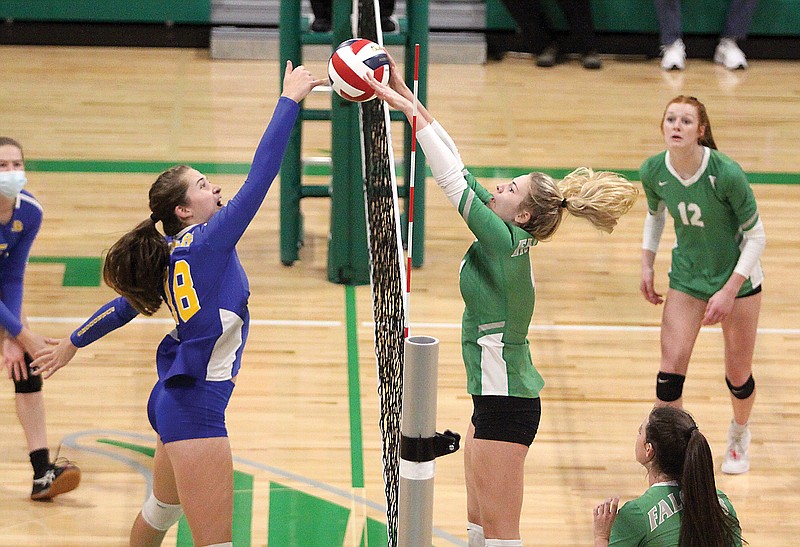 WARDSVILLE -- Last season had plenty of firsts for the Blair Oaks volleyball team.

The Lady Falcons wouldn’t mind going back for a helping of seconds this season.

“We got those checked off, which is really exciting,” Blair Oaks coach Megan Distler said. “But right now, we’re looking for this year. The goals are the same, to go win that district title and keep pushing toward state.”

Blair Oaks begins its season today and Saturday in the MICDS Brace for Impact Tournament. The Lady Falcons will open with pool-play games tonight against Fox and Althoff Catholic and Saturday morning against North Point.

It’s one of two new tournaments on the Blair Oaks schedule, along with the El Dorado Springs Invitational in October.

Blair Oaks returns five players that took the court in at least 70 sets last season, but several other players were around the team for the state championship run.

“We’ve had a lot of these girls on our team this year that were on the bench for us last year,” Distler said. “They got to feel the energy and feel the excitement.

“It helps to have the experience from the girls who were a part of that, but the other girls have the energy and the belief that they can do that.”

Junior outside hitter Autumn Bax is the lone all-state returner from last year’s team. Bax, a left-hander, led the Lady Falcons with 414 kills in 2021.

Bax has been a leader on the court, but Distler will look to her to be a leader vocally as well.

“She’s a good go-to player, she’s going to go hard for every ball,” Distler said. “Partway through last year, I just realized you can’t take her off the court because some of those things she brings to our team.”

Senior Anna Wekenborg returns at middle hitter, second behind Bax in both kills and blocks among returners.

“She’s a middle that’s going to keep everybody on their toes,” Distler said. “She loves to run different routes and keep things moving.”

“She’s really grown a lot in her hitting ability,” Distler said. “If they focus on Autumn, if the give Bailey just one blocker, she’s going to smoke that ball.”

Aubrey Hardwick, a senior, will also play outside hitter for the Lady Falcons in their 5-1 offense.

“Aubrey got a lot of experience in a lot of different positions (last year),” Distler said. “She filled in for Bailey on the outside, she filled in the middle when Sarah (Girard) was out for one game. She has a lot of good front-row experience.”

Although Blair Oaks has plenty of experience returning on the front line, the Lady Falcons will be starting a new setter and libero this season due to graduation.

Senior Tayla Prenger and junior Amber Samson will both get time at libero -- Prenger will start at libero this weekend -- and junior Libby Juergensmeyer will take over as Blair Oaks’ setter.

“We brought Libby up to varsity last year so she could learn from Madi (Rissmiller) and get some of those varsity reps,” Distler said. “She’s ready to be the primary setter this year.”

Senior Kenley Mitchell will get playing time as both outside hitter and defensive specialist, while junior Alison Sporleder will be the backup setter.

“Kenley can play anywhere on the court,” Distler said. “She’s probably going to be the first one off the bench.”

Juniors Aubrey Sandbothe and Abbey Heckman will be middle hitters and junior Brooke Lehmen will play outside hitter to round out the varsity roster.

Several of these players contributed at the JV level last season. The Lady Falcons’ JV team won 17 of its first 18 matches in 2021 and finished 26-6.

“They know how to win, they find ways to win,” Distler said. “That’s part of competing at that JV level to get them ready for varsity.”

Distler said she has liked the energy from her team during the summer, as they played at Nebraska, Licking and Lafayette camps.

“We really started growing together,” she said. “They do a good job of supporting each other and pushing each other.”

The Lady Falcons were short-handed at all three camps, which allowed for more involvement from the new varsity players.

“They just competed really well against all of those teams,” Distler said.

Blair Oaks will be on the road next week for two matches: Tuesday at Sullivan and Thursday at School of the Osage for the Tri-County Conference opener. The Lady Falcons have won 11 straight conference titles and have won 51 consecutive Tri-County matches.

“It’s a long season, we still have two more months of games to go,” Distler said.