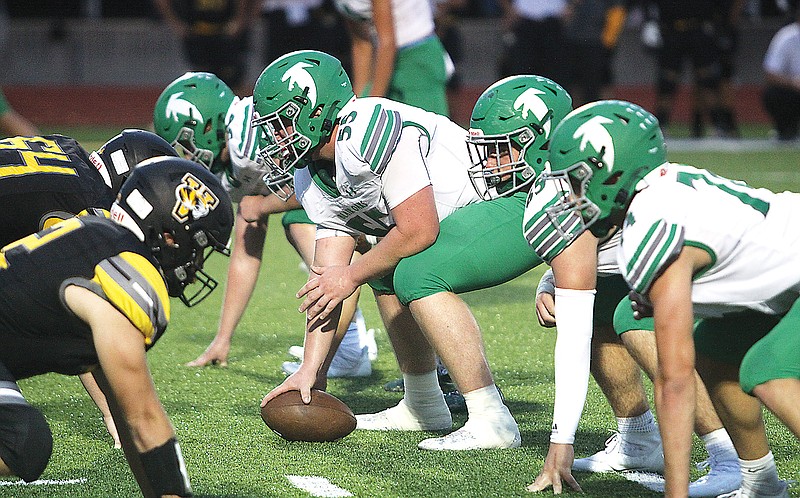 WARDSVILLE -- The 2021 season wasn’t a typical season for the Blair Oaks Falcons.

The 2021 season is done, finished, in the past. But the takeaways from last season have had a significant impact in the offseason preparation for this fall, and it started with a meeting with this year’s seniors and returning starters in December.

LePage, who is about to begin his 22nd season as a head coach, also offered an apology to the players, referencing the Falcons’ 49-14 loss to Mexico in the district championship game.

“I said I didn’t do a very good job in the Mexico game after Dylan (Hair) got hurt,” LePage said. “I lost my composure, and I can’t do that. We have to move forward. When Dylan went out, it was like everybody lost their composure.

“One guy isn’t the team. We don’t want to lose a guy, but when it happens, we have to do a better job of adapting.”

He threw for 28 touchdowns and rushed for 37 scores, totaling 4,050 yards of offense.

LePage isn’t expecting his three-time all-state quarterback to replicate all those numbers this season.

“Last year, Dylan put too much on himself,” LePage said, “and as coaches, we did, too. We have reformatted the way he thinks, the way we think, that you have 10 other players on offense. Let’s let everybody else do their job.”

During last week’s Jamboree against Helias and Southern Boone, Hair didn’t record a single carry. Sure, part of that was designed to prevent Hair from suffering a preseason injury, but there was also no need for him to rush the ball.

He’ll have more than enough help in the backfield this season.

Starting at running back is junior Eli Luckett, a transfer from Richard Montgomery High School in Rockville, Md. Junior Brady Kerperin and sophomore Dylan Kliegel will also be ball carriers for the Falcons.

“We can be as physical as we want up front, but you have to have that physical running back,” LePage said. “We feel like we have that, and that is going to take so much pressure off Dylan.”

Other players who will get time at receiver are senior Zack Prenger, juniors Jake Hagner and Jace Rackers and sophomore Jaxon Engelbrecht.

“We have some speed at the receiver position, we have the athleticism to shake some things loose,” LePage said.

A key component for Blair Oaks’ option offense will be simplification.

“This year, it will be two options. Do one or the other.”

Senior Wyatt Bonnett will anchor the Falcons’ offensive line at center. He has made the Class 3 all-state team in back-to-back seasons.

Senior Kaden Hoelscher, who was an all-state lineman in 2020, will start at left tackle, while senior Ethan Toebben will be the left guard. On the right side of the line, junior Cole Peters will play guard and junior Justin Atnip will play tackle.

Backing them up on the line will be senior Sid Brownell, junior Parker Bennett, sophomores Justin Koetting and Carson Rustemeyer and freshman Carson Luebbering.

Backing up Hair at quarterback are freshman Tyler Bax and junior Wyatt Meldrum.

LePage has been stressing three things to his offense: cut down penalties and turnovers, get 4 yards every play and everybody run to the football.

“We want to attack going down the field,” he said.

It was no secret last season. The Falcons were young on defense.

That was one of the reasons that led Blair Oaks to give up 30.9 points per game and the most points allowed in program history (371).

If LePage grew tired of saying “we’re a young football team” last season, he’s going to say it some more this season. Blair Oaks returns several starters on defense, but only two are seniors.

“One thing I talk to them about that has changed for me as a head coach watching our defense is the communication,” LePage said. “Last year, it was ‘coach talk, player listen, player go out, player do.’ This year, it’s ‘coach talk, players ask questions, players point things out.’

“There’s an open communication between the players and coaches. The learning is continuous.”

The Jamboree was a successful test run.

“Our players really started to trust our coaches, and our coaches were trusting our players,” LePage said. “The communication link was there.”

The Falcons will operate with a 4-3 defense. Normally, LePage would like to utilize three defensive linemen.

“We have about six or seven guys that can play D-line,” he said.

On the front line, Luebbering and Parker Bennett will play nose guard, while sophomore Bryson Varner and junior Jaxon Marshall will start on the ends.

“Those four dudes will flat-out run and get to the ball,” LePage said. “(At the Jamboree), coaches and officials both made comments like, ‘You all are so much bigger than you were last year.’ But it’s the same guys, they just grew a little bit.”

Blair Oaks returns all three starters at linebacker. Senior Holden Brand will line up on the right side, Kerperin will play in the middle and junior Doug Blaha will be on the left side.

Kerperin led the Falcons with 100 tackles last season, while Brand and Blaha also ranked in the top five in total tackles.

“Holden is our ringleader, he is the controller of the defense,” LePage said. “He calls all the fronts and he’s very talkative, very intuitive, but he’s also cognitively just so sharp and he picks things up so well.”

Blair Oaks will have a pair of two-way starters, as Wieberg -- the other senior starter on defense -- will be a safety and Closser will play at cornerback.

Wieberg was the only Blair Oaks defensive player to make all-state last season.

“He’s lived up to what he was supposed to do in the offseason and in the preseason,” LePage said.

Peters, Koetting, Brownell and sophomore Ayden Luckett will play backup on the defensive line, Kliegel, sophomore Nolan Laughlin and freshman Hayden Lackman will back up the linebackers and Hair, Wilde, Hall and Prenger are backups in the secondary.

One of the deficiencies the Falcons are trying to shore up on defense this season is cutting down on allowing the big plays. Last season, opponents had 20 touchdowns on plays of 20 yards or more against the Blair Oaks defense.

LePage had gone to a simple formula to fix this in the weight room: mass multiplied by acceleration equals force.

On special teams, Laughlin returns as the Falcons’ placekicker. In his freshman season, he converted 80 percent of his extra-point attempts and also made one field goal.

Hair will continue his duties as the team’s punter, although Blair Oaks rarely punted last season. Hair had just 15 punt attempts in 12 games.

In the return game, Hagner and Lackman will serve as the team’s kick returners, while Wieberg will be the lone returner back on punts.

Blair Oaks begins the season with its fifth annual Kickoff Classic against Maryville. Tonight’s kickoff is at 7 p.m. at the University of Central Missouri’s Walton Stadium in Warrensburg.

Since losing to the Spoofhounds in the Class 3 state semifinals in 2017, the Falcons have won the past five meetings: four season openers and the 2020 Class 3 state championship game.

“If you know anything about their team, you know they’re going to be the best-coached team you’ll play all year,” LePage said.

Maryville went 7-5 last season, losing three of its first four games, including a 40-6 decision to Blair Oaks. The Spoofhounds won the Class 2 District 7 championship before falling to Richmond in the state quarterfinals.

Maryville returns a pair of all-state players in senior linebacker Cooper Loe and senior offensive lineman Kort Watkins, but the Spoofhounds will bring another talented group into tonight’s opener.

“We’ve watched their Jamboree film,” LePage said. “It’s the same number, different guy, same (type of) player. They’re so good at what they do, and they make you earn every penny of what you do.”

Maryville coach Matt Webb is entering his 11th season with the Spoofhounds, boasting a 120-18 career record. LePage is in his 10th season at Blair Oaks and has a 97-18 record.

“Usually you want to ease into the season, but there’s no easing here,” LePage said. “It’s a flat-out, hard-nosed backyard brawl of a football game.”