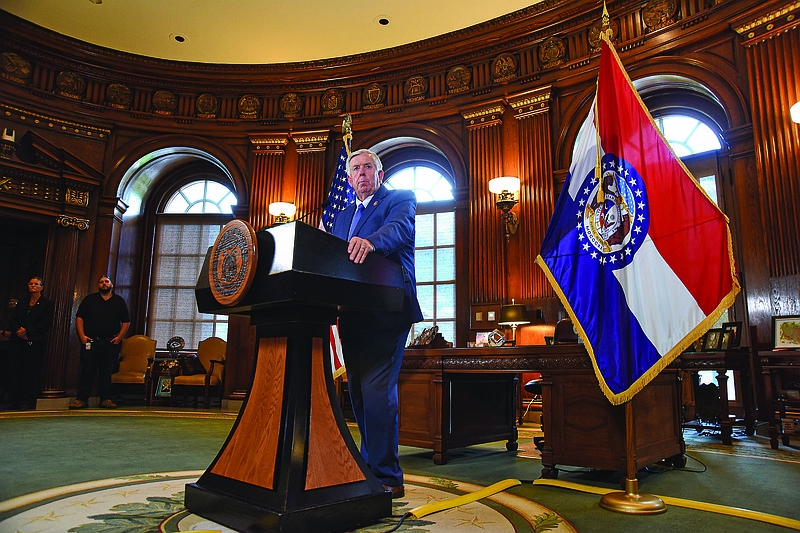 Missouri lawmakers will return to Jefferson City on Sept. 6 to consider what Gov. Mike Parson is calling the biggest tax cut in Missouri history.

After vetoing an underfunded tax rebate program crafted by Republicans earlier this year, Parson is calling on the General Assembly to pass a substantial tax cut, extensive tax code reform and extension of agricultural tax credits.

A single bill containing permanent tax relief and extension of agricultural credits should result from the special session, Parson announced in a news conference Monday afternoon.

The special session starts at noon Sept. 6. Parson said the bill will originate in the Missouri Senate, but he had not yet identified who will sponsor the legislation in either chamber.

The call for a special session tasks legislators with bringing the top individual income tax rate from 5.3 percent to 4.8 percent, increasing the standard deduction to $2,000 for individuals and $4,000 for couples, and eliminating the bottom income tax brackets.

Together, Parson said the measures mean Missouri wouldn't tax the first $16,000 in income for individuals and $32,000 of income for couples.

"The point is that every taxpaying Missourian, no matter their background, income or job description, will see a deduction in their tax liability," Parson said. "And that is a win for all Missourians."

The top individual income tax rate was 5.8 percent when Parson assumed office in 2018. His administration has overseen two previous tax cuts that when combined with the new proposal will have brought income taxes down by a total of 1 percent.

The latest proposal is a permanent loss of more than $700 million in state revenue, but the governor said Missouri's strong economic position can withstand the loss.

Parson touted the state's 2.5 percent unemployment rate and record general revenue surplus -- which he credited to keeping businesses open during the COVID-19 pandemic -- as indicators it's time for the state to cut taxes.

Missouri's general revenue income is nearly 40 percent higher than it was a year ago, he said, which has contributed to the largest revenue surplus in state history.

Amy Blouin, president and CEO of the Missouri Budget Project, said the state's budget surplus is a temporary result of short-term federal funds.

The nonprofit public policy analysis organization president said Parson should employ the same reluctance he had about using federal funds for ongoing needs to the permanent tax cut.

"Quite simply, relying on the current surplus to fund permanent tax changes isn't fiscally sustainable, or responsible, and will ultimately require cuts to state services like we saw in Kansas a few years ago," Blouin said in a statement Monday.

Parson said his administration has been analyzing the affordability and sustainability of a tax cut for more than a year and hasn't included federal funds in its general revenue projections.

Even with the tax cuts, Parson said the state will maintain its historic funding for healthcare, education, infrastructure and workforce development.

"What we cannot afford is to fail Missouri families," he said.

In addition to the tax cuts, Parson's call for a special session looks to support the top industry in the state.

"Vetoing the ag bill was not something I took lightly or wanted to do," he said. "But to put it simply, it was a bad deal."

Parson noted he signed eight other tax incentive programs with six-year sunsets during the most recent session, and agricultural tax credit programs can't successfully be implemented and used by Missouri farmers in two years as legislators originally passed.

The call for a special session tasks legislators with extending the expiration of four tax credits and creating four new ones.

The special session language also calls for lawmakers to exempt utility vehicles used for agriculture from state and local sales and use taxes, create the Specialty Agricultural Crops Act and change the definition of a small farmer in the Family Farms Act.

"I will always be a top supporter of agriculture in this state," Parson said. "And it's time for others who say the same, to do the same. We all need to step up and get this done for our family farms."

The Republican governor has been laying the groundwork during the past month to solidify a plan for the legislation, meeting with House and Senate lawmakers on both sides of the aisle, as well as agricultural groups and conservative think tanks.

He said a "vast majority" support the plan.

Reps. Dave Griffith, R-Jefferson City, and Rudy Veit, R-Wardsville, said they fully support the tax cuts because they appear to be sustainable, based on projections from the governor's office.

The representatives said they don't anticipate the bill running into major roadblocks in the House, but were unsure of how the special session will go in the Senate.

Parson said the Senate, which has been embroiled in Republican infighting for the past year, has an opportunity to come together during the special session. He said lawmakers should see a way to move the tax cuts forward quickly.

"Priorities like cutting taxes and supporting agriculture are why Missourians have elected us and entrusted us to lead this state," he said.

The ongoing renovation of the House chamber could pose an obstacle for the special session. As of Monday, the chamber remained without a carpet, desks and furniture.

Renovations were scheduled to be complete by the mid-September veto session, but Parson said the timeline was moved up to the end of August the last time he spoke with staff involved with the project.

Parson is hosting a conference call to talk about the special session with community leaders and local elected officials from across the state today . He's also stopping in St. Joseph and Kansas City to promote the session.

His schedule this week also includes stops to promote the session in Bridgeton, Columbia, Kirksville and Springfield.