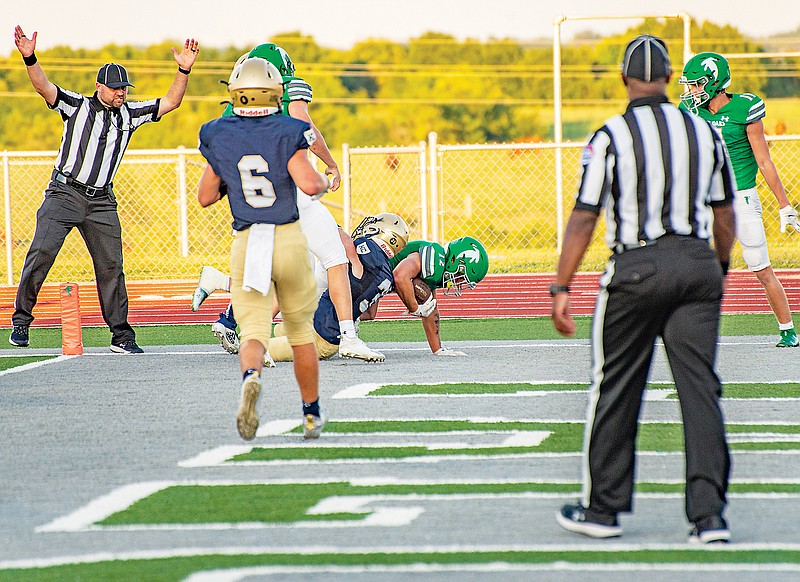 WARDSVILLE -- It’s a Jamboree, so the Blair Oaks Falcons weren’t going to show everything in their playbook.

But they did show some new looks, particularly within their run offense.

“We wanted to see if we could run the football with our running back,” Blair Oaks coach Ted LePage said after Friday night’s Jamboree against Helias and Southern Boone at the Falcon Athletic Complex.

Quarterback Dylan Hair, who broke the school’s single-season rushing record last season, didn’t have a carry in the Jamboree. It wasn’t necessary.

Eli Luckett, a junior running back transfer from Maryland, led the Falcons’ backfield with nine carries for 86 yards and a 7-yard touchdown run against Helias.

Blair Oaks also operated out of the wishbone formation on its final two offensive plays from the first-stringers against the Crusaders.

“The way I started as a coach was coaching the wishbone,” LePage said. “… When we said ‘wishbone,’ the players got all jacked up. That’s going to be part of our package.”

The second play out of the wishbone was a play-action pass that resulted in a 65-yard touchdown reception from Hair to Adam Hall.

Defensively, the Falcons saw improvement from the start of the Jamboree to the finish.

“We still aren’t where I want us to be, but boy, we’re a lot closer,” LePage said. “I thought we were more physical this year than we were last year.”

“He got beat up a lot as a sophomore last year, he took everybody’s best shots,” LePage said. “Parker is a big, athletic inside player.”

Eight of Southern Boone’s 18 offensive plays against Blair Oaks went for a loss.

The Falcons avoided injuries during the Jamboree, which is always a top priority each season.

“We’re healthy, that’s the first part,” LePage said. “The second part is we have to be better on Monday than we were today.”

Up next for Blair Oaks is the Kickoff Classic next Friday against the Maryville Spoofhounds at the University of Central Missouri’s Walton Stadium in Warrensburg.