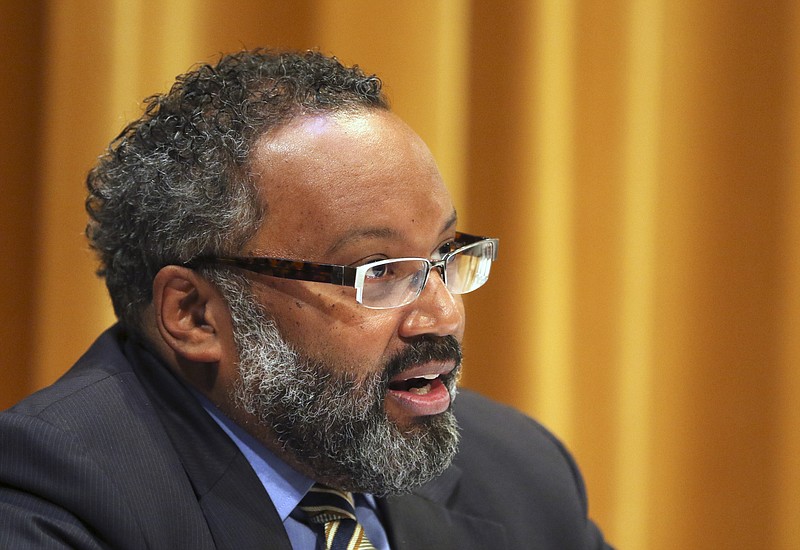 FILE: Missouri NAACP chapter President Nimrod Chapel answers a question during the public safety town hall in April 2021 at the Richardson Auditorium at Lincoln University. The town hall, held virtually for audience members, was hosted by LU, KRCG and the News Tribune as part of the Jefferson City Community Engagement Series.

A virtual event hosted Monday evening by the Jefferson City chapter of the Missouri NAACP featured a discussion on reproductive health care access. A panel of speakers from across the state covered everything from medical exams and advice to birth control options and abortion, in addition to ways those concerned about the changes could organize.

The meeting followed July's overturning of Roe v. Wade, the landmark U.S. Supreme Court case that set the standard for federal abortion policy in 1973. Missouri officials signed off on a near-total abortion ban the same day, prohibiting doctors from performing abortions outside of a medical emergency. The act also created criminal liability for those performing and inducing an abortion, though those receiving the procedure are shielded from prosecution under the statute.

Nimrod Chapel Jr., president of Missouri NAACP, pointed to Missouri's history with civil rights during the past several decades and said the new restrictions were an extension of previous actions that had affected people of color.

"We see now that Missouri is an even more dangerous place when we think about these pushbacks on basic health care that we've seen in terms of reproductive care and women's health care," he said. "We know that health disparities are still in tow in Missouri, which leads to a downward spiral on what can only be seen as another attack on not just women, but women who are people of color."

In a news release announcing the meeting, the NAACP pointed to statistics showing regarding maternal mortality and complications. According to data from the Centers for Disease Control and Prevention (CDC), Black women are three times more likely to face maternal health issues or die while giving birth compared to white mothers.

The speakers noted forms of birth control, including morning-after pills, remain legal in Missouri and commended House Minority Floor Leader Crystal Quade for seeking clarity from the executive branch on the topic. They also noted abortion is still accessible in neighboring Illinois and Kansas, and encouraged those seeking those services to check online resources for more information and financial aid if needed.

Allen also encouraged viewers to make their voices heard at the ballot box in the November midterm elections and beyond.

"I've heard people of younger generations say it doesn't matter if we vote, and I just want to say voting is what got us to where we are today and voting is one way that we'll get out of it," she said. "So vote like your life depends on it, because in reality there will be people who die because they do not have access to abortion and that's a reality we have in the United States and in Missouri now."

A recording of the meeting will be available at facebook.com/jeffersoncity.naacp.