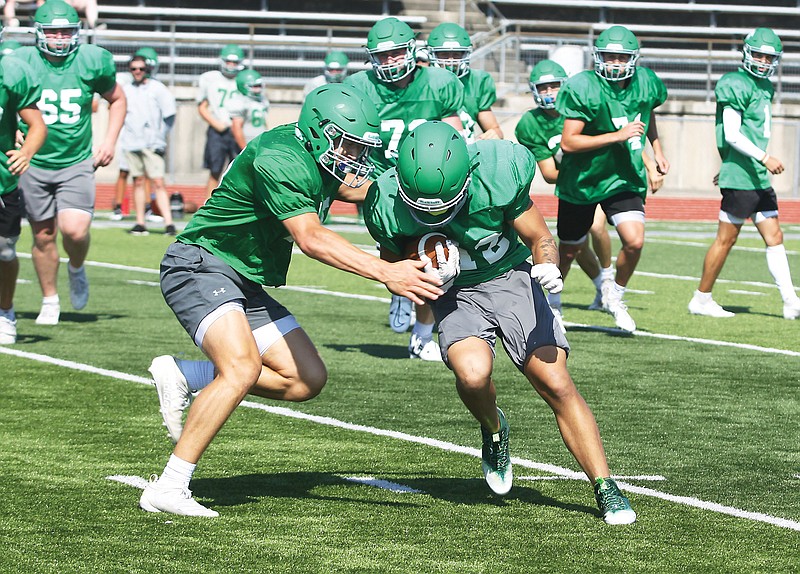 Blair Oaks linebacker Brady Kerperin (left) races in to make a tackle against running back Elijah Luckett during Saturday’s scrimmage at the Falcon Athletic Complex in Wardsville. (Greg Jackson/News Tribune)

WARDSVILLE -- There were plenty of points being scored in Blair Oaks football games last fall.

The Falcons were doing most of the scoring, but their opponents found the end zone with great frequency as well.

With no seniors starting the season on defense last year, and with 10 of those starters returning, Blair Oaks coach Ted LePage knew more work was needed than those 12 games of experience heading into this season.

“Just straight up weight room, to be honest,” LePage said after Saturday morning’s intrasquad scrimmage at the Falcon Athletic Complex. “I’ve told many different people, we were a talented-enough team last year. We were a mentally tough team last year. But physically, we weren’t ready to play at that level.

“It wasn’t beating up on weights, it was taking the weight room a little more seriously.”

There was offseason progress made on the coaches’ part as well.

“We went to a couple different places and modified some things to try to make us better and help our players,” LePage said.

Some of the improved teaching points were addressed in the weight room.

Other teaching points have been made in defensive drills on the field.

“We bought a couple different tackling apparatuses,” LePage said. “We’ve gone to a one-man sled, and they’ve got to physically hit that and drive it into the ground.

Blair Oaks allowed 30.9 points per game last year, and the 371 points allowed are the most in a season in program history. Yet the Falcons finished with a 9-3 record, were district runners-up and were No. 8 in the final state rankings.

The defense displayed growth in back-to-back weeks against School of the Osage, going from giving up 43 points in the regular-season finale to recording its first shutout of the season the following week against the Indians.

“We didn’t end the season the way we wanted to, but near the end of the season -- Weeks 10 and 11 -- we saw some physicality out of our defense,” LePage said. “We saw where that could go.”

The defense will be tested when the season begins later this month, starting with the Falcons’ fifth straight season opener in the Kickoff Classic against Maryville.

“We’re playing the best team predominantly in the last 10 years in the lower classes on the west side of the state,” LePage said.

The test will be just as difficult in Week 2 for the Falcons’ home opener against Lutheran North, the third meeting between the two teams, but it’s the first time they’re facing each other in the regular season.

“We got into correspondence with them and we were like, ‘Absolutely, we’re playing,’” LePage said. “Predominately, in the last 10 years, they’re probably the best small-school team on the east side of the state.”

It’s a tough non-conference slate for Blair Oaks, just the way the Falcons want it.

But the film room is what has LePage excited one week into fall practice.

“The conversation in the film room, last year, it was silent,” he said. “That’s not a good thing in a film room. … Now there are players talking to coaches, saying, ‘All right, I did this, but I’m not in the right spot,’ and I’m saying, ‘Let’s go back to the start of the play and see you step out instead of stepping under your shoulders.’

“We’re a year older and we’re more physical because of the weight room. But the biggest issue is we’re mentally a year older.”