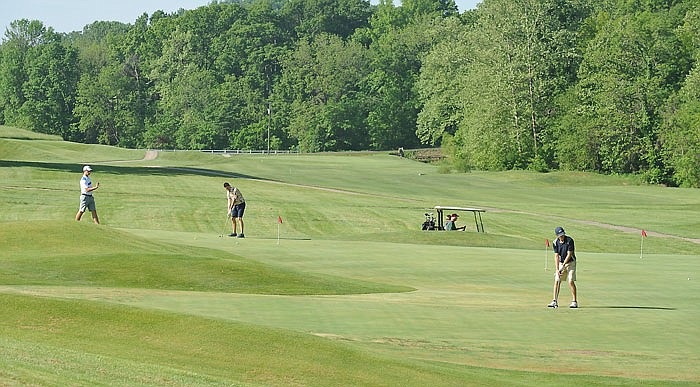 May 2016 News Tribune file photo: Golfers practice on the putting greens while waiting to play at Railwood Golf Course.

Holts Summit is gearing up for the annual Mayor's Cup Golf Tournament.

The tournament will be held Friday, Sept. 16, at Railwood Golf Club, located just outside of Holts Summit. This is the 12th year the event has been held.

Ashton Schrimpf, utility billing clerk for Holts Summit, said it has not yet been determined where the funds raised from the golf tournament will go.

The tournament last year raised funds for the Friends of Holts Summit Splash Pad Project, which was announced in 2018 and has not yet been completed.

Each golf team consists of four players, and the cost is $400 per team. Lunch is included for all players.

Registration will begin at 7 a.m., with play starting at 8 a.m. The event will begin with a shotgun start, which is when all players tee off at the same time, but at different holes of the course. This format attempts to avoid congestion on the course and provide a faster play experience.

Team registrations are due by Sept. 9. The registration form can be found on the city of Holts Summit website.

Last year's tournament had 76 golfers, according to the city of Holts Summit release. Organizers hope for even more players this year.

The Mayor's Cup also provides many sponsorship opportunities for local businesses and organizations. There are seven different levels of sponsorships ranging from $150 to $1,500. Schrimpf said some of the sponsorshps have already been taken.