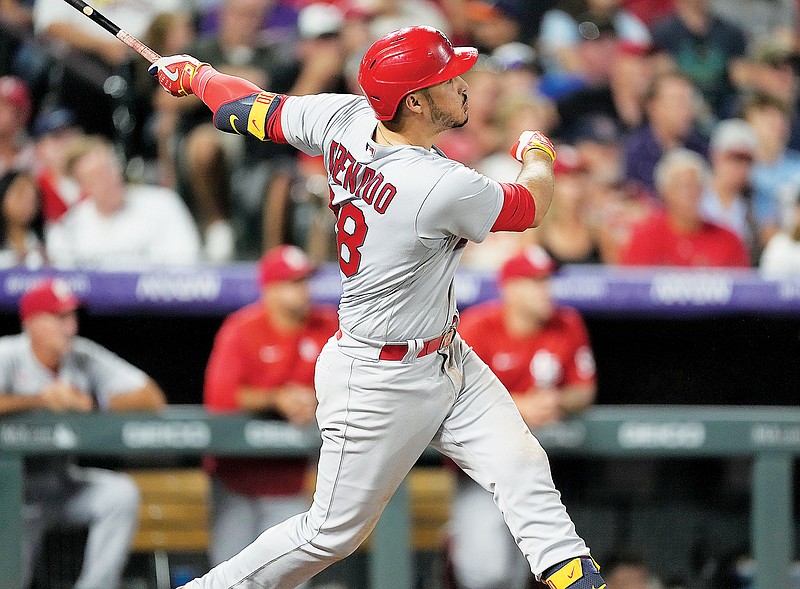 DENVER -- Albert Pujols and Nolan Arenado homered and combined for seven hits, and Jose Quintana made his second strong start for St. Louis in the Cardinals’ 9-5 victory Wednesday night the Colorado Rockies.

“I never thought this could be possible,” Arenado said about playing on the same team with Pujols. “I’ve always thought about that. I’ve been thinking about that for years. It is amazing to learn from a guy like that. To have him hitting behind me is pretty cool, and obviously going back-to-back with him is very cool.”

Quintana (4-5) gave up two runs and seven hits and struck out six in his second quality start since being obtained Aug. 1 from Pittsburgh. He has given two runs and eight hits in 12 innings for the Cardinals, with 13 strikeouts and four walks.

Paul DeJong tied a career high with four hits and had an RBI, Lars Nootbaar had two triples and two RBI and Yadier Molina had two hits and an RBI as St. Louis rebounded from a 16-5 loss in the first game of the series Tuesday that broke its seven-game winning streak.

“We got smacked in the face a little bit yesterday and I think it was important for us to come out with a little hunger and a little energy and we did that today,” Arenado said.

Jose Iglesias had two hits and two RBI and Brendan Rodgers had three hits and an RBI for the Rockies, who scored three in the ninth. They had won three of five.

Quintana fared much better in his second start at Coors Field this season than in his first July 15, when the Rockies roughed him up for six runs in five innings in an 13-2 victory while he was with the Pirates.

“The last time I didn’t have that command like I had tonight,” said Quintana, who got six outs -- and half his strikeouts -- with his breaking ball. “My curve ball was better tonight. I saw the video and made an adjustment on what I want to do, because they know me. I just tried to execute my pitches.”

Colorado starter Kyle Freeland (7-8) gave up 10 hits and six runs in 4⅓ innings, leaving after Molina’s single drove in DeJong for a 6-1 lead in the fifth. Freeland, who struck out one and walked two, had won his last three starts.

After Paul Goldschmidt singled to put runners on first and second with one in the first inning, Arenado doubled into the left field corner for a 1-0 lead. The ball was originally ruled foul but overturned on review after the Cardinals challenged.

Pujols, Tyler O’Neill and DeJong followed with RBI hits before Molina was hit by a pitch and Nootbaar made it 5-0 with a sacrifice fly.

“The way he prepares is incredible to watch,” Cardinals manager Oliver Marmol said. “He’s putting together a pretty special season.”

Goldschmidt was the N.L. MVP runner-up with Arizona in 2013 and 2015, and he has finished in the top six five times. He led the N.L. in homers, RBI, slugging percentage and OPS in 2013 but was runner-up to Andrew McCutchen.

Pujols played in his 3,034th game Wednesday, tying Ty Cobb for fifth in major league history. He has 121 sacrifice flies, one short of breaking a tie with Hank Aaron and Frank Thomas for fourth all-time.

Former Rockie Arenado’s sixth-inning homer down the left field line hit the UC Health Charity banner, which promises a $5,000 donation from the Rockies’ Foundation to the American Cancer Foundation if struck. The donation is only in effect if a current (not former) Colorado player is at bat.

“I think I did like twice and that was it,” Arenado said. “I’m just happy it went out.”

Notes: Cardinals RHP Jack Flaherty (shoulder) was rained out of his first scheduled rehab appearance Wednesday with Triple-A Memphis. Flaherty has been on the 60-day IL since June 27, a day after his third start of the season. … Cardinals LHP Steven Matz (torn ligament) played catch Tuesday in Colorado and will increase his throwing this week. There is no timetable for his return. … Cardinals RHP Jake Woodford was recalled Wednesday from Memphis, when LHP T.J. McFarland was designated for assignment. … Rockies C Elias Diaz aggravated an apparent hand injury while striking out in the eighth inning and was removed from the game. “Today it might have done a little more damage,” Colorado manager Bud Black said. … Rockies RHP Chad Kuhl (hip) played catch Wednesday and is expected to throw a simulated game Friday. He is unlikely to need a rehab start before returning from the injured list when eligible Aug. 19. … Rockies RHP Jhoulys Chacin (toe) also is expected to throw a simulated game Friday. … St. Louis RHP Dakota Hudson (6-6, 4.20 ERA) is to oppose Colorado RHP German Marquez (6-9, 5.18) in the deciding game of the three-game series this afternoon. Hudson has not won in his five starts since June 28. Marquez is 2-1 with a 2.52 ERA in six career starts against the Cardinals.