Press Box: It was unpopular, but not trading for Soto was right move for Cards 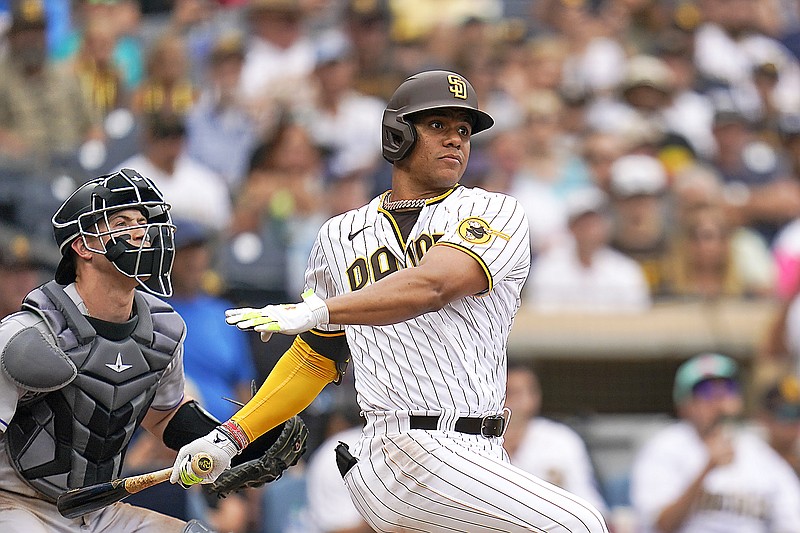 Juan Soto of the Padres takes a swing during the fourth inning of Thursday's game against the Rockies in San Diego. (Associated Press)

A lot can happen in one week in Major League Baseball.

A week ago, Cardinal fans were calling for president of baseball operation John Mozeliak’s head if he couldn’t pull off a trade for Juan Soto. Today, the Cardinals hold a one-game lead in the N.L. Central and have a chance to sweep the New York Yankees.

What a time to be alive.

With the trade deadline approaching last Tuesday, the Cardinals were one of the top contenders to make a trade for Soto. With a starting lineup that already features All-Stars Paul Goldschmidt -- a candidate for the 2022 N.L. MVP award -- and Nolan Arenado, adding Soto would give St. Louis one of the best 2-3-4 spots in any batting order.

The Cardinals have made splashes with trades during the offseason, but a blockbuster deal at the trade deadline? That would have been so out of the ordinary for their front office.

Like many Cardinals fans, I too began to start salivating at what the future for the next two-and-a-half years would look like with all three superstars in one lineup. Forget a wild-card spot. St. Louis would be the favorite to win the division, perhaps in a landslide.

But after a few seconds, I let reality set in, and I looked at what it would take to get Soto in a trade. The return would have to be scary-good for Washington to even consider sending away a player the analysts are already comparing to Ted Williams.

While I never saw an official offer, here are a few players I imagine Washington had to want.

• Dylan Carlson: If you’re trading an outfielder, you’re going to want one in return. And the Cardinals have control of Carlson through the end of the 2026 season. He had to be at the top of Washington’s “want” list.

• Nolan Gorman: This time last year, I was arguing very hard in favor of the Cardinals not trading Gorman. Between Triple-A Memphis and St. Louis this season, he has 27 home runs. The Cardinals haven’t had a left-handed hitter with this much power since Jim Edmonds.

• Matthew Liberatore: I had high hopes for Liberatore, but he has been inconsistent this season, pitching well at Triple-A but struggling in the majors. If the Cardinals included him in a Soto deal, I would have been OK with it.

• Jordan Walker and Masyn Winn: Walker may only be in Double-A at Springfield, but he is by far the Cardinals’ top prospect in the minor leagues. And people are still talking about Winn’s 102-mph throw from shortstop last month during the Futures Game at Dodger Stadium. There’s no way the Nationals consider a trade is Walker is off the table.

I imagine a few other players were in the mix as well -- utility player Brendan Donovan, rookie Juan Yepez or perhaps even Paul DeJong -- but I would guess at least five Cardinals players needed to be in the deal.

As it turns out, Mozeliak knew the Cardinals were out of the running the night before the deadline. Cardinals fans became more furious the next day, when they learned St. Louis lost out on Soto to the San Diego Padres.

Looking back, Mozeliak made the right call. Here’s why.

In December 2017, the Cardinals received Marcell Ozuna from the Miami Marlins in return for four players. One of those players was Sandy Alcantara.

Ozuna decided not to sign a contract extension with the Cardinals after the 2019 season, and Alcantara is in the driver’s seat to win this year’s N.L. Cy Young award.

Yes, the Cardinals have won many trades, but this is one they clearly lost. And my guess is Mozeliak was thinking if St. Louis couldn’t sign Soto to an extension, would winning a World Series by 2024 be the only way you could win a trade with the Nationals?

Going into the trade deadline season, I thought the Cardinals needed starting pitching more than they needed Soto. The team’s performance this past week is proving me correct.

Jose Quintana got a no-decision Thursday in his Cardinals debut, but he allowed just one hit in six innings and struck out seven against the Chicago Cubs.

Good starting pitching fixes almost any team’s woes, as we saw last year, when the Cardinals added Jon Lester and J.A. Happ at the deadline. The offense just needed a spark.

For all I know, this could just be a short-term hot streak for the Cardinals. With two more months to play, anything is possible.

But even though Soto isn’t wearing a St. Louis uniform, the Cardinals made the unpopular -- but correct -- call. These prospects and rookies are their future, and it wasn’t worth the gamble to see if Soto wanted to retire a Cardinal.